Sea lampreys and silver lampreys were drawn upstream by the smell of bile salts. Only the sea lampreys, though, swam in looking for love 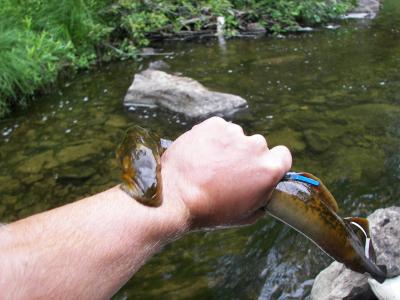 [dropcap style=”font-size:100px; color:#992211;”]D[/dropcap]eep in your subconscious is a factory of vile imagery, lodged there as an ultimate deterrent, the primordial font of terror and disgust from which the mind borrows, momentarily, to prevent you from doing things your conscious mind has for some reason deemed logical.

Suffice to say that sexed-up lampreys feature in that wellspring of ick.

New research at Michigan State University shows that bile salts, secreted from the liver and traditionally associated with digestive functions, are being used as pheromones by sea lampreys. The interesting twist, though, is that this scent has evolved as the invasive species’ cologne of choice.

and colognes, were not

The evolution of bile salts from digestive aid to pheromone, featured in the current issue of the Proceedings of the Royal Society B, mirrors humans’ adaptation of perfume.

“It’s similar to how perfume has evolved in our society,” said Tyler Buchinger, one of the lead authors and MSU doctoral student. “Perfume was first used to mask body odor due to a societal stigma against daily bathing. Today, in many cases, it exemplifies romance and is used to attract mates.”

Bile salts, like perfumes and colognes, were not first used as sex signals. Their primary use is to process fats. Over many hundreds of years, though, they have evolved to become beacons of sexuality in addition to their digestive duties. The evolution of males emitting this pheromone appears to be a result of female lampreys’ receiver bias, or their desire to mate sparked by the fragrance.

Since time travel is out of the question, Buchinger and Weiming Li, one of the lead authors and MSU professor of fisheries and wildlife, tested the evolution theory on silver lampreys, a species native to Michigan and recognized as a more-ancient species than sea lampreys.

In the field, sea lampreys and silver lampreys were drawn upstream by the smell of bile salts. Only the sea lampreys, though, swam in looking for love and ready to spawn.

Silver lampreys are one of four native lamprey species in Michigan; the others are the chestnut, American brook and northern brook. Knowing that a distinct scent affects an invasive species differently from the native fauna they are displacing is a research angle worth pursuing, Li said.

“This mating call is quite effective, and it has helped sea lampreys thrive,” he said. “Knowing that bile salts cause sea lampreys to react differently than our native species, which have long been part of our ecosystem, could eventually lead to better ways to control sea lampreys.”