Iron Age Druids might have known about and used magic mushrooms even if there’s no way of testing it.

[dropcap style=”font-size:100px; color:#992211;”]N[/dropcap]ews that the psilly season is officially underway (with early reports that this might prove to be a bumper year) means it’s a good time to return to the question of whether psilocybin mushrooms were ever used in British prehistory.

When I was researching Shroom I found a complete absence of evidence for anyone consuming magic mushrooms before the eighteenth century, and even then such reports as exist show ingestion remained accidental and unintentional right up until 1970, a staggeringly late date.

Many lines of evidence have been put forward to suggest our Stone, Bronze and Iron Age forebears deliberately used mushrooms, but sadly none are categorical and each is open to alternative and typically more parsimonious explanation.

The absence of evidence in the archaeological record is unsurprising given that fungi rot away to gloop unless actively dried or preserved in some way. Nor does consuming magic mushrooms require any special paraphernalia – pipes, grinders, pouches or so on – the kind of things that do turn up in excavations. So until Liberty Caps are found jammed in a pot or preserved in the stomach contents of a bog-body, we’re left in the unsatisfactory position of not knowing one way or the other. It does mean, however, that we’re pretty much free to believe whatever we want.

I concluded that if prehistoric people had used psilocybin mushrooms then they must have done so in a small-scale and localised manner. For if psilocybin mushrooms formed the backbone of prehistoric religious practice, as so many have claimed, there surely would have been more unequivocal evidence than the occasional bit of ‘possibly-trippy’ artwork in a passage-grave or on a cave wall. But the traces just aren’t there. Now I’m starting to wonder if I wasn’t too hasty.

allowed every generation to

reinvent the Druids, for

heathens or as proto-Christian

What got me thinking again was watching an old episode of Britain BC in which archaeologist Francis Pryor likened the Roman slaughter of the Druids on Anglesey in AD60 to the much more famous burning of the library at Alexandria. In that dreadful inflagration countless precious papyri, the great works of the ancient world, were permanently lost. The Druids famously eschewed the written word, so why the connection?

As Ronald Hutton demonstrates in his magisterial Blood and Mistletoe, much of what we think we know about the Druids comes from the works of classical sources and is therefore not necessarily to be trusted. Authors like Pliny the Elder and Julius Caesar either romanticised the Druids from afar, or regarded them with suspicion as the enemy to be overcome. Nonetheless it does seem likely that the Druids were a kind of priesthood, involved in law-giving, settling disputes, divination, performing sacrifices and so on, and that becoming a Druid was a long and complicated process in which the noviciate was required to commit vast tracts of cultural lore to memory.

It was this oral knowledge that Pryor was alluding to. All of it was lost when Gaius Suetonius Paulinus sent his troops across the Menai Straits to cut down the sacred groves and put every last Druid to the sword. 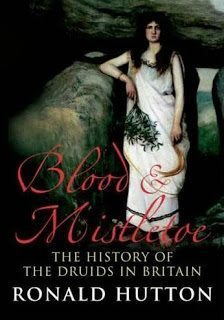 Once again absence of evidence has allowed every generation to reinvent the Druids, for example as devil-worshipping heathens or as proto-Christian prophets or even stoned-out hippies.

And as a child of my time I tend to think of the Druids as woojied-up, tattooed shamans with a profound knowledge of plants, animals and the land. In other words I’m starting to wonder if they mightn’t have known about and used magic mushrooms after all.

To be clear, this is at best an inference, most likely pure fantasy, but, well, it’s a hypothesis.

To illustrate the kind of knowledge I mean, here’s an excellent talk by anthropologist Jeremy Narby recalling his ontologically-shattering encounter with indigenous Amazonian worldviews as a PhD student back in the 80s. Then he was as unable to countenance the indigenous view of plants – that, when seen through the ayahuasca telescope, they talk to us – as I suspect the Romans were that of the Druids.

So Pryor’s observation has opened up the possibility for me that Iron Age Druids might have known about and used magic mushrooms even if there’s no way of testing it.

Either way, it’s a sobering reminder of what happens when cultural memory is lost. For in the Amazon, as elsewhere, we continue the Romans’ work with renewed virulence. And with every shaman that falls so too do whole libraries that would put Alexandria to shame.