This year, Présence Autochtone (Montreal First Peoples Festival) celebrated its 25th anniversary of bringing the culture of the aboriginal people of Canada and the rest of the Americas, through film, music, dance and art, to local audiences. 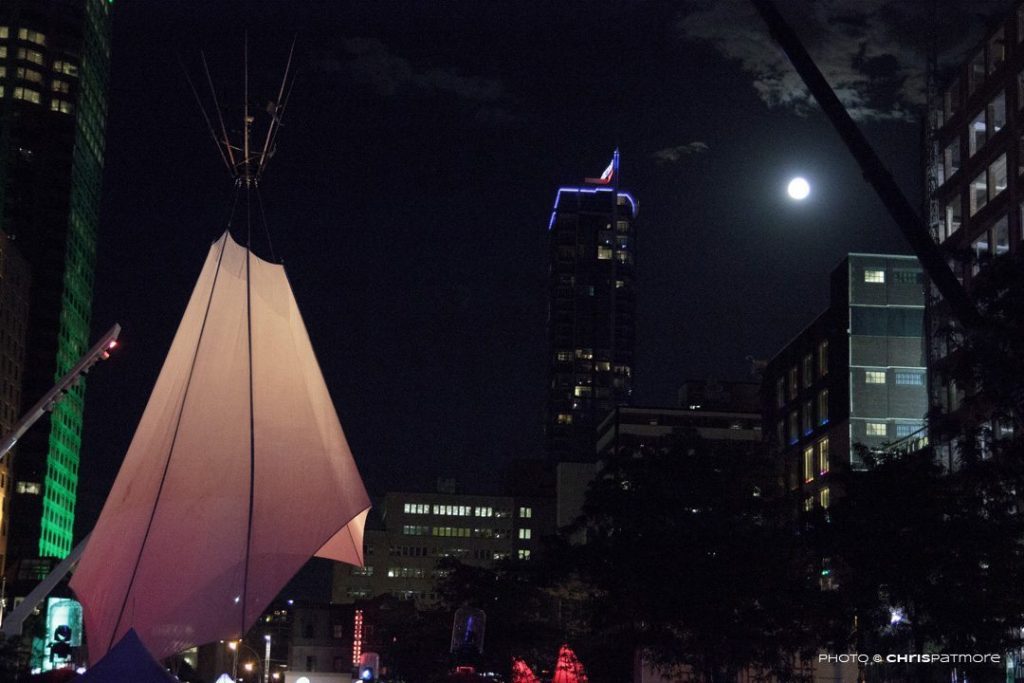 [dropcap style=”font-size:100px; color:#992211;”]I[/dropcap]f you are looking for a summer of culture, then Montreal during July and August is definitely the place to be.

There’s fantastic hot, sunny weather – tempered and enlivened by the occasional torrential thunderstorm – that makes it ideal for enjoying the endless stream of festivals that cater for all tastes, and the French-influenced cafe lifestyle, which is enhanced by superb international cuisine, to while away the hours between the cultural banquets.

Whether it is comedy (Zoofest), film (Fantasia) or music (Osheaga), to name but a few that are on offer, there is no shortage of events packed with international stars. Montreal’s universities add a further youthful vibrancy into mix.

Seemingly buried amongst this cavalcade of contemporary culture from around the world is a niche festival that has been running for a quarter of a century, highlighting the region’s mostly overlooked indigenous population. This year, Présence Autochtone (Montreal First Peoples Festival) celebrated its 25th anniversary of bringing the culture of the aboriginal people of Canada and the rest of the Americas, through film, music, dance and art, to local audiences. The festival serves to not only celebrate the depth of these ancient cultures, but also highlight many of the issues facing the native people in today’s society.

As a foreigner, there is the impression that Canada is a very liberal, socially conscious country that serves as a shining example in comparison to its gun-toting neighbours to the south, whose police kill even more native people than they do African-Americans, rarely making the news. The reality though is that, while the Canadian police may not be as heavy-handed, the situation for the First Nation people in Canada is anything but ideal. Politics, corruption and exploitation by the petrochemical industry leaves them as oppressed as any post-colonial indigenous people anywhere else in the world. This was highlighted in several of the films shown in the festival this year, with some possibly the most controversial of any others shown in the festival’s history.

The two films in question were Treading Water by Janelle Wookey, and Antigone Documentary by Matt Keay, both shown on the Saturday. Treading Water highlighted the situation of communities in the Winnipeg area that were flooded out of their homes when water was diverted away from the big city to avert a potential crisis, but created a new one instead. With their homes destroyed and their land turned to swamp, the evacuees were placed in hotels in the city, completely dismantling the community.

Three years, and millions of dollars on hotel expenses, later, nothing has been resolved for the people, who became political pawns as stories and accusations of bribery, corruption and misappropriation of funds (much within the aboriginal organisations) are revealed, while the victims are portrayed as scroungers.

On the surface, Antigone Documentary, which had its world premiere at the festival, is about a Cree adaptation of Sophocles’ classic Greek tragedy, and how a theatre group wants to film a performance of the play to show to the wider aboriginal communities. In this new version, Creon, the king of Thebes, is transmuted into a corrupt tribal chief. However, when the actual Council Chief catches wind of the play, he believes it is specifically directed at him and bans the performance, and the project’s funding is also pulled. Eventually the play does get filmed, under less than ideal conditions.

It was some time later that filmmaker Matt Keay came to hear about this and spoke with the writer, director and the cast, during which further revelations about corruption surfaced, but it doesn’t end there. The day after the screening an informal Q&A was held with the filmmakers, and the producer announced that there is even more intrigue behind the story involving energy companies, threats of violence and more deep-rooted corruption. Keay announced that after seeing how well the film was received he is going add to the film to tell the whole story.

While these revelations are disappointing, they are hardly surprising, and given how corruption at all levels is being exposed at the moment, whether it is the church, government or sporting bodies, the fact that tribal chiefs are just as fallible shows they are equally human. The positive note that came from the film is how astute and wise the young people are, with clear visions of how these problems can be resolved.

To a certain extent, the aboriginal people are at an advantage because they can have a level of self determination, in terms of societal laws, that most of us can’t get through our so-called democracy.

Thankfully, not all the films on show dwelt on the negative aspects of aboriginal life in the Americas, although it is vitally important that they are given a forum at the festival, especially as the majority of audiences were made up of non-indigenous people. The opening night film, Circus Without Borders, was a very positive and uplifting film about two completely diverse communities: an Inuit town in the Canadian Arctic beset by an epidemic of youth suicide, and a poverty-stricken village in Guinea in equatorial Africa. Both form acrobatic circus troupes to help resolve their problems, and end up collaborating and sharing experiences.

Short films were a major part of the festivals and covered all genres including animation and fantasy, as well as drama. Being a film festival, the quality of the films covered the full gamut, ranging from neophyte and film-school standards up to works with stunning cinematography, such as the Mexican film Café, which won the Best Film Award.

To increase the public presence of Présence Autochtone, the festival takes over La Place des Festivals in the heart of Montreal’s entertainment district, for four days, with a huge suspended teepee as the centrepiece. 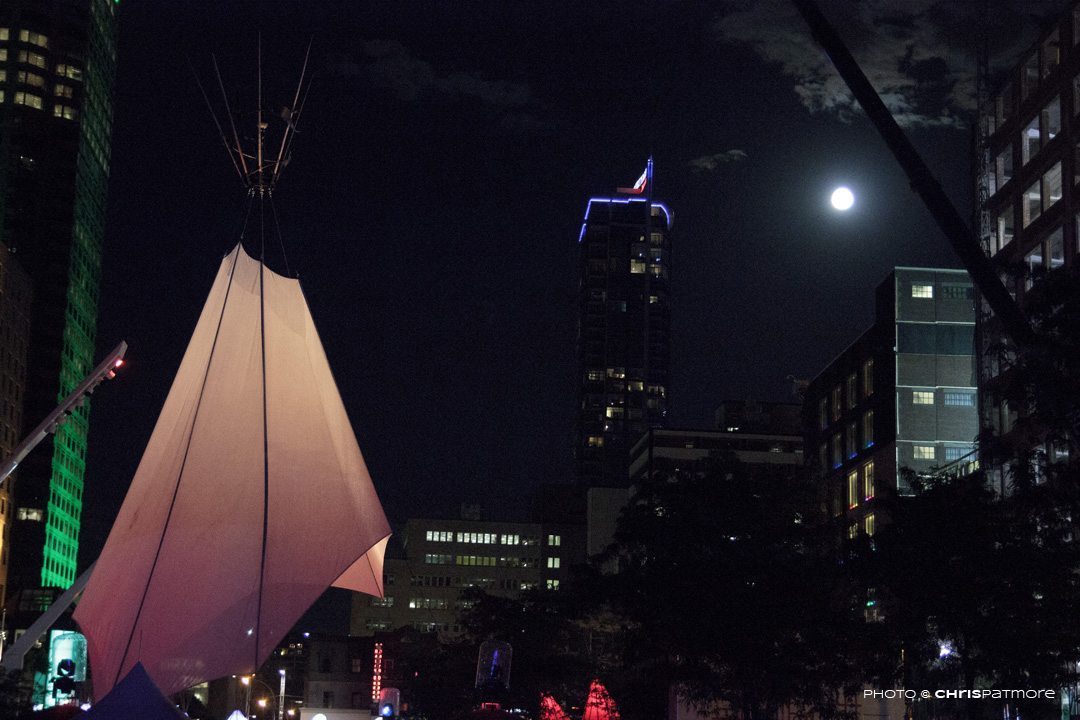 Displays of crafts and other free cultural events happen here, including a continuous open-fire barbecue. The main attraction is the free concerts in the evenings. Thursday was a night of EDM, held in conjunction with MEG (Montreal Electronique Groove Festival), featuring DJ Psychorigid and DJ Madeskimo. Friday night saw the square packed for the Blues Blanc Rouge Remix with performances from Florent Vollant and singer/songwriter/poet Richard Desjardins, both of whom performed at the initial festival 25 years ago.

Desjardin, who is renowned in the region, was also one of the initial supporters of the festival, making it all the more fitting for him be performing on the silver anniversary.

Saturday afternoon is given over to a massive parade led by First Nation people and including representatives of indigenous groups from all over the Americas, and beyond which make up the diaspora of Montreal and the Quebec region. After the procession, each of the regional groups put on displays of dancing and song. Before the entertainment a representative of the Mohawk nation spoke about how the First Nation people are matriarchal societies and the destructive colonialism of Western society is patriarchal, and for the world to return to balance we need to give more respect and power back to the feminine.

This speech was all the more profound as the full moon, evoking the feminine aspect, was rising above the city’s skyline, and a blue moon as well.

The highlight of the festival, musical or otherwise, came on Sunday evening. Following a showcase of up-and-coming talent from artists of the Musique Nomade, which spread across genres ranging from the country/bluegrass (there was a banjo) of Esther Pennell to the blues rock of Matthew Vachon, from the pop/soul of Eadsé to profound electronica of DJXS7, came Transcestral from Montreal artist Moe Clark.

This two-hour spectacular was a fusion of tribal drums, Inuit throat singing, Middle Eastern music, jazz and a string section all accompanied by native dance, belly dance and a whirling Dervish. The whole performance transcended the label of world music to become something even more universal.

As already mentioned, Présence Autochtone is up against some pretty stiff competition in the local festival market, but should you find yourself in Montreal at the end of July then add it to your list of things to see, for something out of the ordinary that will also open your eyes and your mind to an often misunderstood and misrepresented culture.

Previous Story:
Are you Ready for 11 Billion? World Population – Soon. 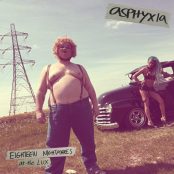 Next Story:
Exclusive track: Eighteen Nightmares at the Lux (Asphyxia)