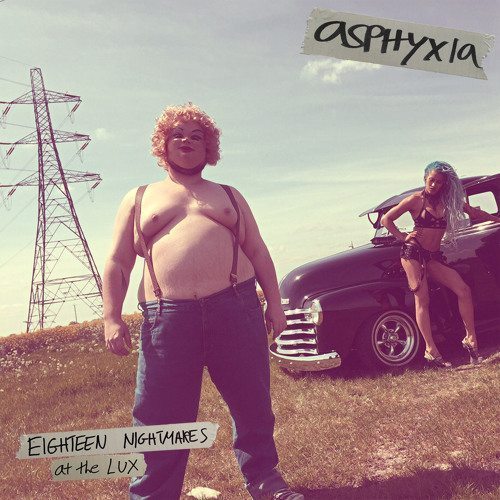 ‘ASPHYXIA’ Eighteen Nightmares at the Lux On 14th August 2015

Press release:
Formed in London in 2011, Eighteen Nightmares At The Lux have steadily carved out a niche sound for themselves by trading in Kraut-rock and psychedelic influences for a sound that encapsulates elements of horrorcore a ’la early Cramps , psychobilly and the frenetic garage punk of 80’s Matchbox B-Line Disaster.

‘Asphyxia’ sees Eighteen Nightmares take on a grittier, hard-edged approach, which encapsulates the aesthetics and energy of Marilyn Manson and the raw punk rock attitude of The Dead Kennedys.

The band are set to release ‘Asphyxia’ which follows on from their critically acclaimed 2014 EP releases ‘Pig’ and ‘Mouth to Mouth’. This will be released through independent Record Label Dissention Records home of other artist such as Queen Kwong and RedRacer. Produced by Sean Genockey (Reuben, Jamie Lenman)

After a great response at this year’s Great Escape Festival the band will also be performing at Bestival on the Saturday featuring on the ‘Invaders of the Future Stage’.  Please see below a full list of up and coming shows during August

Next Story:
Spots or Stripes? Why Animal Camouflage is WRONG