Then Wash Your Hands: The Pathogens of Prehistoric Poo

Remember that stand-up segment Billy Connolly had about the skewed logic of pooper-scoopers, and how placing one of nature’s most biodegradable substances into plastic bags was a bit misguided? About how archaelogists of the future would find said packages in ancient landfills and wonder why exactly our culture revered faeces?

An ancient latrine near a desert in north-western China has revealed the first archaeological evidence that travellers along the Silk Road were responsible for the spread of infectious diseases along huge distances of the route 2,000 years ago.

Cambridge researchers Hui-Yuan Yeh and Piers Mitchell used microscopy to study preserved faeces on ancient ‘personal hygiene sticks’ (used for wiping away faeces from the anus) in the latrine at what was a large Silk Road relay station on the eastern margins of the Tamrin Basin, a region that contains the Taklamakan desert. The latrine is thought to date from 111 BC (Han Dynasty) and was in use until 109 AD.

Chinese liver fluke is a parasitic flatworm that causes abdominal pain, diarrhoea, jaundice and liver cancer. It requires well-watered, marshy areas to complete its life cycle. Xuanquanzhi relay station was located at the eastern end of the arid Tamrin Basin, an area that contains the fearsome Taklamakan Desert. The liver fluke could not have been endemic in this dry region.

In fact, based on the current prevalence of the Chinese liver fluke, its closest endemic area to the latrine’s location in Dunhuang is around 1,500km away, and the species is most common in Guandong Province – some 2,000km from Dunhuang.

Researchers from the University of Cambridge’s Department of Archaeology and Anthropology, who conducted the study, suggest that the traveller infected with this liver fluke must have journeyed an enormous distance, and suggest the discovery provides the first reliable evidence for long distance travel with an infectious disease along the Silk Road.

The findings are published in the Journal of Archaeological Science: Reports.

“When I first saw the Chinese liver fluke egg down the microscope I knew that we had made a momentous discovery,” said Hui-Yuan Yeh, one of the study’s authors. “Our study is the first to use archaeological evidence from a site on the Silk Road to demonstrate that travellers were taking infectious diseases with them over these huge distances.”

The Silk Road (or Silk Route) came to prominence during the Han Dynasty in China (202 BC – AD 220) as merchants, explorers, soldiers and government officials journeyed between East Asia and the Middle East/Mediterranean region.

Researchers have previously suggested that diseases such as bubonic plague, anthrax and leprosy might have been carried by ancient travellers along the legendary trading route, as similar strains have been found in China and Europe.

“Until now there has been no proof that the Silk Road was responsible for the spread of infectious diseases. They could instead have spread between China and Europe via India to the south, or via Mongolia and Russia to the north,” says study lead Piers Mitchell.

The Cambridge team worked alongside Chinese researchers Ruilin Mao and Hui Wang from the Gansu Institute for Cultural Relics and Archaeology, who originally excavated the ancient latrine and relay station in Ganzu Province. 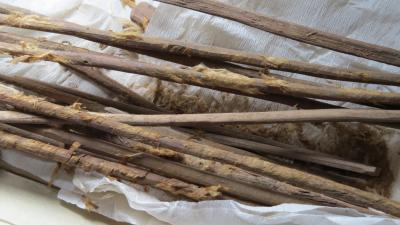 These are 2,000-year-old personal hygiene sticks with remains of cloth, excavated from the latrine at Xuanquanzhi.

The stop was a popular one on the Silk Road with travellers staying there and government officials using the facility to change their horses and deliver letters. While excavating the latrine, the Chinese team found the personal hygiene sticks with cloth wrapped round one end.

Added Mitchell: “Finding evidence for this species in the latrine indicates that a traveller had come here from a region of China with plenty of water, where the parasite was endemic. This proves for the first time that travellers along the Silk Road really were responsible for the spread of infectious disease along this route in the past.”

Previous Story:
Sludge in the Sparkplugs? (The Company Corvette)

Next Story:
Preaching to the Choir (The Rubens, Tufnell Park Dome)