Sludge in the Sparkplugs? (The Company Corvette)

Is Doom, Groove and Stoner metal too rich a mix for this Corvette’s carburettor? Review

[dropcap style=”font-size:100px; color:#992211;”]W[/dropcap]ith a name like ‘The Company Corvette’ you have to wonder what this Philadelphia three-piece sound like.

To me, the word Corvette brings to mind either the legendary and iconic ‘Stingray’ Corvette, one of the staples of the much loved, classic muscle car era… or it jumps to the sleeker, raw, powerful and hard to handle Z06 series. One thing though which links these two iconic cars is just how ferocious they are.

Now, if we use that logic: iconic, recognisable and full of raw power just waiting to be unleashed, we’d be expecting something powerful and extremely terrifying (but satisfying) like Conan, one of the most intense and heavy bands in the doom genre at the moment.

Instead, what we have is a rather intriguing approach. Hard to pin down to an exact signature, the band’s sound mirrors that of the legendary sludge rockers The Melvins, both in terms of music and composition. With gratuitous fuzz, pounding bass and some tight drumming, this three piece really grab a firm hold of the stoner and sludge vibe. 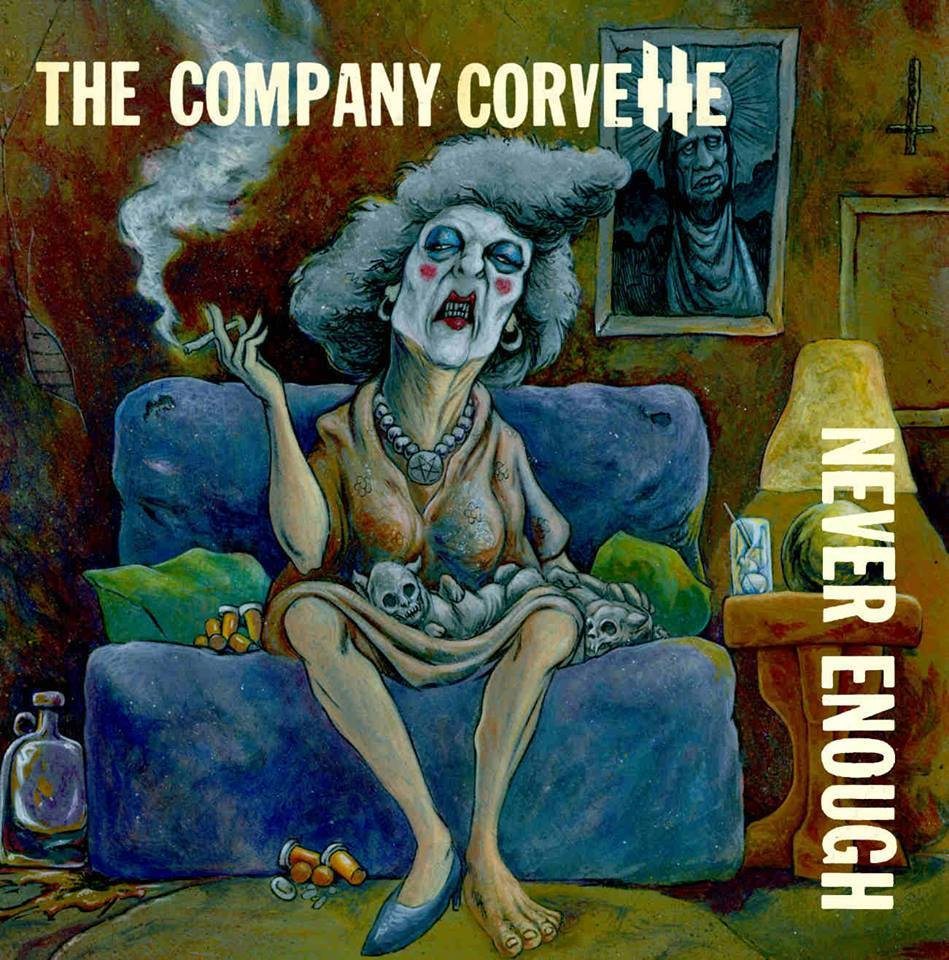 “Foot In Mouth” opens the album (entitled Never Enough) with a pounding bassline full of groove and some harsh samples adding that extra edge. A building drum pattern soon follows with some sustained feedback, all building towards a huge wall of filthy sludge. Slow and crushing, it coasts along, mercilessly collapsing all in its path. With some Sabbath-ian doom influences, the verse riffs are delivered with great control for maximum heaviness, and the psyche-friendly vocals linger in the air like some kind of surreal chant. Hypnotic with both vocal and groove delivery, the sludge consumes you, smothering you in riffs and pounding groove. To be honest, that’s not a bad thing. Towards the later stages of the track, there’s some solid wah pedal abuse, giving the song an even more trippy feel. By the end, you are well and truly in the passenger seat as this three piece takes you for a ride.

Trailing out into feedback and then coming back in with a flawless transition, the hypnotic, wah laden bassline of “Devilwitch” sends us further into the murky sound territories. With its colossal riffs, psychedelic bass and pounding drums, the hypnotic feel lingers. Augmented by feedback, it goes into a far heavier sound. Tortured vocals and some seriously low end riffery, it keeps the sluggish pace to the groove. With some seriously evil progressions and ominous lead licks, this track delves even further into the sludge. This isn’t something to mosh to, it’s pure stand there and headbang (or nod in approval) as it goes on. Speeding up slightly for the lead section, it sparks to life before descending back to the venomous sludge and it brings even more wah pedal abuse and atonal harsh lead lines which compound the surreal feeling. If you weren’t under its spell before, you surely will be now.

“Sick” sparks things to life. With a faster pace than the previous two tracks, it has a raw, dirty rock feel to it. Simplistic in its progressions and structure, its riffs and bassline provide a thick sound to accompany the groove. There are flashes of Hendrix in there, particularly ‘Purple Haze’. With raw vocals tortured and screamed, it really feels like something from the Melvins’ back catalogue around the Bullhead era. Full of stoner quality, fuzzy guitars, trippy bass solos and massive emphasis on riffs, it’s a real dirty sounding track which changes the flow of the album, giving a slight reprieve from the darkness.

“Stomach” shatters that reprieve with a wail of feedback into a thick and heavy riff fest. With that Sabbath-ian feel oozing out of it, the steady paced monster continues on. Spaced out vocals, clever layered guitars adding some melody to the dark tones, it really wraps itself round you, bringing back that headbang feel. Simplistic in its approach, it really follows the ‘less is more’ mantra, blending the Sabbath stylings with some hazy grungy feel a la Alice In Chains. Tortured, with a feel of hopelessness about it, the track really grips with atmosphere and the piercing wah and feadback focused lead in the final run of the track just adds to that unease.

“Burn Out” acts as another slight feel and flow changer. Bringing back a more animated approach, similar to that of ‘Sick’, it nevertheless retains that dismal mood and sound. With the thick sounds powering through again, the dynamic between the guitar and bass really shines. In the intro, the two can be heard clearly and the way they complement each other augments a great sound. Ringing out clear, the bass acts as a solid focal point, dictating the pace for the hypnotic guitar riff. The verse is short lived, hammering away with power but what follows is the real focal point of this track. With the Sabbath feel in full force, the bassline comes alive, twisting and turning underneath the guitar melody before it enters a lead section which plays out similar to ‘NIB’ and Sleep’s Dragonaut. As the song shifts again, it picks up the pace. Brighter sounding but still murky in feel, it brings in a more animated section again, with a great sounding solo, full of hypnotic feel and solid rhythm work, making the middle of the song really stand out. Returning to the stoner section with another hypnotic lead, the bass suddenly takes over with a bright and trippy vibe as it snakes its way across the final moments of the track.

“The Stuff” brings back the stoner feel. Chunky riffs are accompanied by a Mike Patton-esque vocal delivery, bringing a real bouncy and hooky quality to the track. With intricate bass runs, a booming low end and tight drumming, the track moves along with minimal fuss. The erratic, almost Frank Zappa styled lead just adds to the slightly off-centre style and it’s a very different approach to the rest of the album. More accessible. It lacks the intensity or ominous feel of the previous tracks but it still maintains that groove and low end kick.

Closing the album is “Pigeon” which flows in smoothly from the previous track, bringing us back to a familiar sonic territory which mirrors most of this album. The slow paced Sabbath styled riffs, laden with wah pedal and a clear bassline slowly work their magic. Hazy vocals, thundering chugs and tight drums litter the verse and the hypnotic melodic line of the intervals and chorus lazily rings out, giving it that surreal edge once again. Subtle riff changes add a slight twist to the flow, increasing the complexity and helping the track transition back to the lower register riff range. Booming out, it gets into a decent headbanging groove before some clever wah use comes back in from the guitar (adding a more sinister sound to the progressions unfolding). Stuck somewhere between dark and bright, the track rumbles on with the extended instrumental section, giving all instruments some prominence at times (be it the tight fills, rumbling low end heavy bass or dynamic guitar) before bringing this ride to a stop.

The Company Corvette have put together an interesting package here. It has all the hallmarks of stoner-doom styled metal, but none of the main traits which would cement this band to that particular style. Heavy in its own right, it’s not quite heavy enough to be called Doom. Full of groove and rich sound but lacking the kick of Stoner, it, much like The Melvins, Tomohawk and other hybrid acts, sits in the grey area where genres and particular sounds mix, but not enough to yield easily identifiable or accessible results. Musically, it is composed well, it has some great moments, excellent dynamics and synergy between the band members. It just lacks that spark to really get the motor running so you can head out on the highway.

Previous Story:
Do You Want Shinier Computer Graphics? You Got ‘Em

Next Story:
Then Wash Your Hands: The Pathogens of Prehistoric Poo