Out of Body Robotic Stroking 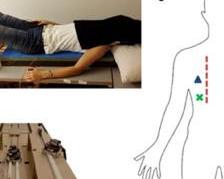 I call dibs on Cristiano Ronaldo’s.

Researchers from the Center for Neuroprosthetics at the Swiss Federal Institute of Technology (EPFL), Switzerland, show that people can be “tricked” into feeling that an image of a human figure — an “avatar” — is their own body. The study is published in the open-access journal Frontiers in Behavioral Neuroscience.

Twenty-two volunteers underwent a Full Body Illusion when they were stroked with a robotic device system while they watched an avatar being stroked in the same spot. The study is the first to demonstrate that Full Body Illusions can be accompanied by changes in body temperature.

Participants wore a 3D high-resolution head-mounted display to view the avatar from behind. They were then subjected to 40 seconds of stroking by a robot, on either their left or right back or on their left or right leg. Meanwhile, they were shown a red dot that moved synchronously on the same regions of the avatar (see image).

After the stroking, the participants were prompted to imagine dropping a ball and to signal the moment when they felt that the ball would hit the floor. This allowed the researchers to objectively measure where the participants perceived their body to be.

The volunteers were asked questions about how much they identified with the avatar and where they felt the stroking originated from. Furthermore, to test for physiological changes during the illusion, the participants’ skin temperature was measured on four locations on the back and legs across 20 time points.

Results showed that stroking the same body part simultaneously on the real body and the avatar induced a Full Body Illusion. The volunteers were confused as to where their body was and they partly identified with the avatar. More than 70% of participants felt that the touch they had felt on their body was derived from the stroking seen on the avatar.

Data revealed a continuous widespread decrease in skin temperature that was not specific to the site of measurement and showed similar effects in all locations. The changes in body temperature “were highly significant, but very small,” write the authors in the study, adding that the decrease was in the range of 0.006-0.014 degrees Celsius. 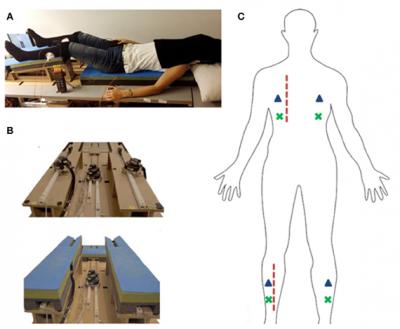 The recorded temperature change was smaller than an earlier study found (0.24 degrees Celsius) that looked at fluctuations during rubber hand illusion, probably because the latter used a hand-held thermometer over longer periods and different regions of the body, the authors explain.

“When the brain is confronted with a multisensory conflict, such as that produced by the Full Body Illusion, the way we perceive our real body changes. This causes a decrease in our body temperature, ” says Dr. Roy Salomon, a postdoctoral fellow at the EPFL and the lead author of the study.

The scientists also say that the field of cognitive neuroprosthetics carries great promise for new prosthetics that are based on a neuroscientific understanding of the link between body and mind.

“This study helps us to understand the brain mechanisms that underlie the bodily aspects of consciousness and idea of ‘self’. It may contribute to the design of novel prosthetic devices and treatment of pain, for example, after stroke, amputation, or tetraplegia,” says Prof. Olaf Blanke, director of the newly founded Center for Neuroprosthetics.

“This type of research may also help to understand and treat psychiatric disorders, such as schizophrenia and depression. We hope that by identifying the mechanisms involved in these processes and how they are altered in psychosis we can help these patients,” adds Dr. Salomon.

Dr. Salomon and colleagues are currently investigating how to help treat psychiatric disorders through understanding the cognitive and neural mechanisms involved in these disorders as part of the National Center of Competence in Research (NCCR)’s project titled The Synaptic Bases of Mental Diseases (SYNAPSY), financed by the Swiss National Science Foundation.

Source: “Frontiers in Behavioral Neuroscience” the paper is available on the following URL: http://www.frontiersin.org/Behavioral_Neuroscience/10.3389/fnbeh.2013.00065/abstract

Caption to illustration: This is a picture of the experimental setup. It shows the participant lying on robotic stroking device. (B) This is the robotic stoking device shown from feet perspective. The top shows the padding removed for motor view and the bottom shows the robot with padding as used in the experiment. (C) This is a schematic representation of the stroking regions (dashed red line), tactile vibrators (blue triangles), and thermocouple placement (green x).