On Thin Ice. What Will Polar Bears Eat After Global Warming?

Polar bears marooned on land might, where the conditions are right, stave off starvation by turning to alternate food sources.

[dropcap style=”font-size:100px; color:#992211;”]P[/dropcap]olar bears driven from their customary habitat by global warming may end up avoiding starvation by turning to ‘alternative food sources’.

Something like all those Florida sharks that used to eat seals, but now chow down on food waste, sewage and… um, humans.

As climate change accelerates ice melt in the Arctic, polar bears may find caribou and snow geese replacing seals as an important food source, shows a recent study. The research, by Linda Gormezano and Robert Rockwell at the American Museum of Natural History, is based on new computations incorporating caloric energy from terrestrial food sources and indicates that the bears’ extended stays on land may not be as grim as previously suggested.

“Polar bears are opportunists and have been documented consuming various types and combinations of land-based food since the earliest natural history records,” said Rockwell, a research associate in the Museum’s Department of Ornithology who has been studying the Arctic ecology of the Western Hudson Bay for nearly 50 years. “Analysis of polar bear scats and first-hand observations have shown us that subadult polar bears, family groups, and even some adult males are already eating plants and animals during the ice-free period.”

Previous studies have predicted mass polar bear starvation by 2068, when annual ice breakup is expected to separate the bears from their sea-ice hunting grounds for a consecutive 180 days each year–creating ice-free seasons that will last two months longer than those in the 1980s. But those estimates assumed no energetic input from land food sources.

Gormezano and Rockwell computed the energy required to offset any increased starvation and then determined the caloric value of snow geese, their eggs, and caribou that live near the coast of the Western Hudson Bay. They found that there likely are more than enough calories available on land to feed hungry polar bears during the lengthening ice-free seasons.

Although the exact energetic cost for a bear to hunt geese and caribou is uncertain, polar bears in Manitoba have been reported ambushing caribou with the same energetically low-cost techniques they typically use to hunt seals. The similar size of these two prey species means that bears would need to hunt for caribou only as often as they would usually hunt for seals, the researchers say.

“If caribou herds continue to forage near the coast of Western Hudson Bay when bears come to shore earlier each year, they are likely to become a crucial component of the bears’ summertime diet,” Rockwell said. 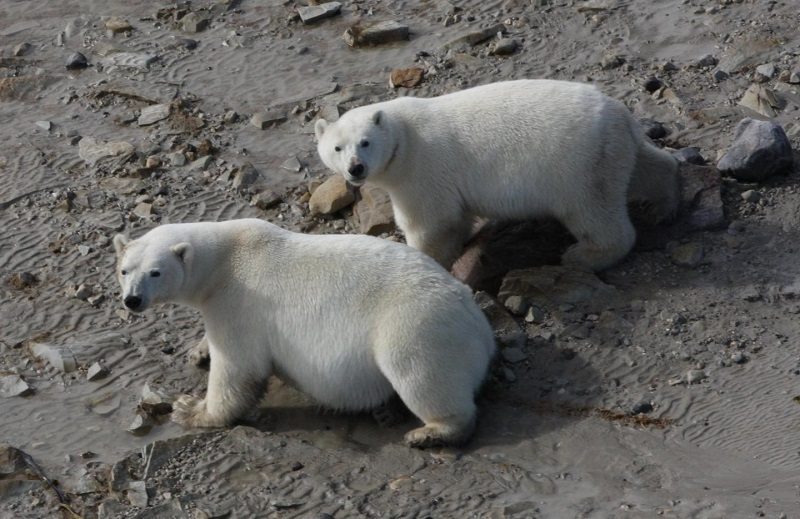 The eggs of snow geese are another food source for bears, and the energetic cost of obtaining eggs in ground nests is exceedingly low, the researchers say. With adequate food sources available, snow geese are known to endure polar bear egg predation without detrimental effects to the population.

Scientific consensus holds that the rapidly melting circumpolar ice reserves will increasingly prevent polar bears from hunting the seals on which they currently depend. Nevertheless, these observations of one population along the Western Hudson Bay show that bears marooned on land might, where the conditions are right, stave off starvation by turning to alternate food sources.

Next Story:
Staying Classy Whilst Skirting the Edge of Cheese (Praying Mantis)