New research from International Communication Association claims that the sexualisation of female sprites in video games has decreased in recent years.

Gone, it appears, are the days when hyperexcitable young men would swap tips on the best location to back Lara Croft against a wall in Tomb Raider to get that ever-elusive swingshot of her vector-graphic polyhedral chest swellings. And we’re all, surely, the better for it.

Sexualised characters in 1983?! Do they mean the shapely (or at least curvy) Mrs Pacman?

Video Games are an ubiquitous part of our lives. You can find people wandering the streets playing Pokémon Go, or spending hours playing massive multiplayer online games. Because they hold such value in our everyday lives, how they reflect the everyday is more important than ever, especially for those who don’t have much say in their creation. So how are underrepresented groups, like women, portrayed and utilized in games? A recent study conducted by researchers at Indiana University, examined portrayals of playable female characters from 1983 to 2014 to find out.

Teresa Lynch, Jessica E. Tompkins, Irene I. van Driel, and Niki Fritz (Indiana University) published their findings in the Journal of Communication. The researchers analyzed in-game recordings and database information of 571 different games with playable female characters. They coded for five variables: genre, ratings level, critical score, release year, and primary character, and then assigned scores for 11 character variables that examined the sexualization of the character.

The researchers found that sexualization of female characters peaked in the 1990s and have diminished since 2007. The availability of primary playable female characters peaked from 1983-1990, and has since leveled off from a dip from 1991-1998, and they observed the same amount of sexualization in Teen and Mature games despite Mature games being designated for adults. 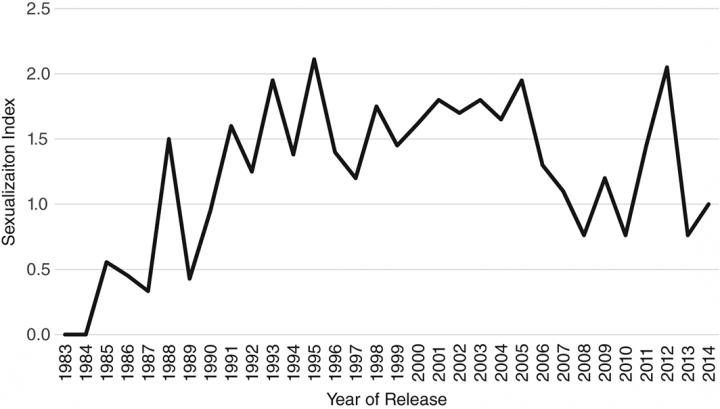 “This study provides a long view of how trends in character design have changed over time, and assembles an otherwise disjointed picture of what has been going on with female video game characters over the years,” said Lynch. “Previous analyses were limited in scope or sample, so they almost always arrived at the conclusion that female characters in games are generally always stereotyped or sexualized. Our analysis provides a more nuanced observation.”