This is probably Cradle of Filth ‘s best album in a while, being neither immediately accessible (and so disposable) or opaquely impenetrable (and so rubbish). 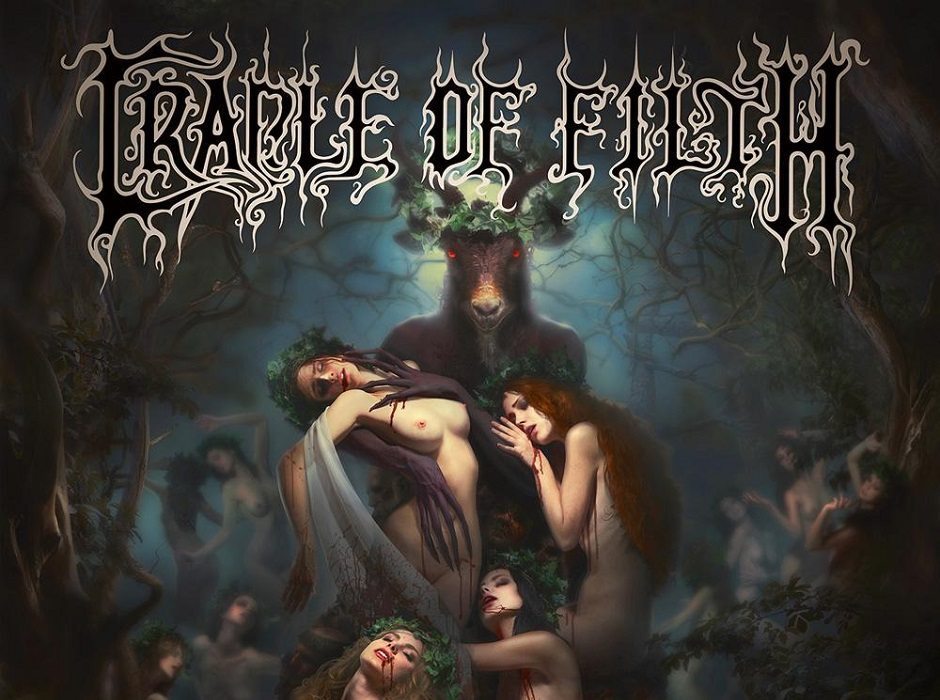 [dropcap style=”font-size:100px; color:#992211;”]I[/dropcap] have a day job. It doesn’t involve scaring children or robbing banks, but it does take me down strange avenues.

If I told you my latest research project involved fish fingers, Shaun Ryder, Gallipoli and the strange antipathy art editors seem to have for plesiosaurs, you may have a reasonable glimpse as to what strange planes of reality I tread.
So for a dash of normality, I now get to review a load of heavy metal CDs.

This is pedestrian by my standards. What’s not pedestrian, however, is the new Cradle of Filth album, Hammer of the Witches. This is probably their best album in a while, being neither immediately accessible (and so disposable) or opaquely impenetrable (and so rubbish). As tracks like Right Wing of the Garden Triptych, with its twisted darkwave pop intro suddenly warping into a suitably rich and layered metal epic, or Yours Immortally going straight for the lacy throat with a romantically vicious vibe, or Blackest Magick in Practice’s melancholy menace underpinned by a strong key riff show, the album is compelling stuff that you need to work hard for to get.

It’s not exactly cutting edge – after 20 years, how can it be? – but it is wonderfully crafted and put together.

Perhaps fittingly then the next disc on the pile – an EP this time – goes by the name of Sign of the Witch, by retroactively inclined San Francisco doomsters, Orchid. The four tracks are good fun all round with all four tracks making a good impression, each having its own character and hook. This isn’t the band at its apex though, their last album – the superlative Mountains of Madness – was always going to be a hard act to follow.

Part of the problem is that the band’s latent Sabbath worship is allowed too much room to roam and eat next door’s rose bushes, especially in the title track, which owes perhaps a little too much to Sabbra Cadabra. This is a shame as they’re more than capable of having their own sound, and as Heretic showed, they are also more than capable of dazzling with their EPs too, but otherwise it’s a good filler until their next offering.

And since we’re dooming our bollocks off at this point, it is only appropriate that we follow up with a suitably droney/sludgey offering, this time with some malty black metal goodness added for good measure. DEUIL, four blokes from Belgium, offer us two l-o-o-o-o-o-n-g tracks (about 15 minutes each in length) of gloomy, abrasive meanderings. The record, Shock/Deny (also the names of the two tracks on the album) is intense and thoroughly realised, but – but by its very nature – long winded and self indulgent. In essence, it radiates the vibes of a properly saturnalian orgy, but the listener doesn’t feel like he’s been invited to the party.

Next up is German thrash/death mongrel-type-thing Dew-Scented, who have issued yet another album with an ‘I’ word as its title. This time it’s Intermination, but what issue the band has against other vowels is a question only they can answer. The album itself is suitably harsh and vicious, not to mention rather good at points, as songs like Ode to Extinction and Atavistic show with their well-thought out structures, key riffs and blasting pace. Sadly, the formula gets rather too samey rather too quickly, and so the album becomes repetitive, but certainly not for want of trying.

Finally, there is the new album by Arcandia, a folk/orchestral/prog metal one-man-band helmed by an intense-looking young muso called Antonio Pantano. It’s a concept album replete with a story book masquerading as a lyrics booklet so you can’t escape its accompanying mythos or the fantasy setting he’s almost tirelessly worked on as much as his guitar sections.

In practice, the album runs on what I term the video game principle  – it works best as background music while you herd your sprite around onscreen or as the soundtrack to a cool TV show you need to pay money for and which has tons of drama, death, dragons/zombies/Kevin Spacey and tits in it. It’s all good fun, of course, but you need to be doing something in the foreground for it to make the most sense. Mind you, I was playing the album while writing up this review, so in that sense it’s victory to Sig. Pantano and his Elven forest, I think….

Next Story:
Wood Stress and Woodquakes. How Hard is Your Wood?