In a study led by Duke researchers, monkeys have learned to control the movement of both arms on an avatar using just their brain activity. 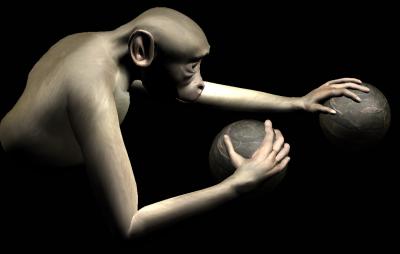 Jabba don’t play, but the monkeys do. Mind-controlled digital avatars. Currently being tested for all sorts of worthy medical reasons, but you know it won’t be long before it’s being shoehorned into some teeny upskirts remote framegrab social sharing app.

In a study led by Duke researchers, monkeys have learned to control the movement of both arms on an avatar using just their brain activity.

To enable the monkeys to control two virtual arms, researchers recorded nearly 500 neurons from multiple areas in both cerebral hemispheres of the animals’ brains, the largest number of neurons recorded and reported to date.

Millions of people worldwide suffer from sensory and motor deficits caused by spinal cord injuries. Researchers are working to develop tools to help restore their mobility and sense of touch by connecting their brains with assistive devices. The brain-machine interface approach, pioneered at the Duke University Center for Neuroengineering in the early 2000s, holds promise for reaching this goal. However, until now brain-machine interfaces could only control a single prosthetic limb.

“Bimanual movements in our daily activities — from typing on a keyboard to opening a can — are critically important,” said senior author Miguel Nicolelis, M.D., Ph.D., professor of neurobiology at Duke University School of Medicine. “Future brain-machine interfaces aimed at restoring mobility in humans will have to incorporate multiple limbs to greatly benefit severely paralyzed patients.”

Nicolelis and his colleagues studied large-scale cortical recordings to see if they could provide sufficient signals to brain-machine interfaces to accurately control bimanual movements.

The monkeys were trained in a virtual environment within which they viewed realistic avatar arms on a screen and were encouraged to place their virtual hands on specific targets in a bimanual motor task. The monkeys first learned to control the avatar arms using a pair of joysticks, but were able to learn to use just their brain activity to move both avatar arms without moving their own arms.

Large-scale brain activity from a rhesus monkey was decoded and used to simultaneously control reaching movements of both arms of a virtual monkey avatar towards spherical objects in virtual reality. Image: Duke Center for Neuroengineering

As the animals’ performance in controlling both virtual arms improved over time, the researchers observed widespread plasticity in cortical areas of their brains. These results suggest that the monkeys’ brains may incorporate the avatar arms into their internal image of their bodies, a finding recently reported by the same researchers in the journal Proceedings of the National Academy of Sciences.

The researchers also found that cortical regions showed specific patterns of neuronal electrical activity during bimanual movements that differed from the neuronal activity produced for moving each arm separately.

“When we looked at the properties of individual neurons, or of whole populations of cortical cells, we noticed that simply summing up the neuronal activity correlated to movements of the right and left arms did not allow us to predict what the same individual neurons or neuronal populations would do when both arms were engaged together in a bimanual task,” Nicolelis said. “This finding points to an emergent brain property — a non-linear summation — for when both hands are engaged at once.”

Next Story:
Dear Media, Where Were You?