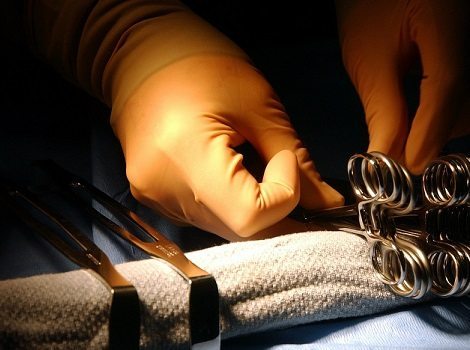 OK, we’ll start you off with a hashtag: #SteveAustrian.

Three Austrian men have become the first in the world to undergo a new technique called “bionic reconstruction”, enabling them to use a robotic prosthetic hand controlled by their mind, according to new research published in The Lancet. All three men suffered for many years with brachial plexus injuries and poor hand function as a result of motor vehicle and climbing accidents.

The new technique was developed by Professor Oskar Aszmann, Director of the Christian Doppler Laboratory for Restoration of Extremity Function at the Medical University of Vienna, together with engineers from the Department of Neurorehabilitation Engineering of the University Medical Center Goettingen. It combines selective nerve and muscle transfers, elective amputation, and replacement with an advanced robotic prosthesis (using sensors that respond to electrical impulses in the muscles). Following comprehensive rehabilitation, the technique restored a high level of function, in all three recipients, aiding in activities of daily living.

“In effect, brachial plexus avulsion injuries represent an inner amputation, irreversibly separating the hand from neural control. Existing surgical techniques for such injuries are crude and ineffective and result in poor hand function”, explains Professor Aszmann. “The scientific advance here was that we were able to create and extract new neural signals via nerve transfers amplified by muscle transplantation. These signals were then decoded and translated into solid mechatronic hand function”.

Before amputation, all three patients spent an average of 9 months undergoing cognitive training, firstly to activate the muscles, and then to use the electrical signals to control a virtual hand. Once they had mastered the virtual environment, they practiced using a hybrid hand–a prosthetic hand attached to a splint-like device fixed to their non-functioning hand.

Three months after amputation, robotic prostheses gave all three recipients substantially better functional movement in their hands, improved quality of life, and less pain. For the first time since their accidents all three men were able to accomplish various everyday tasks such as picking up a ball, pouring water from a jug, using a key, cutting food with a knife, or using two hands to undo buttons.

According to Professor Aszmann, “So far, bionic reconstruction has only been done in our centre in Vienna. However, there are no technical or surgical limitations that would prevent this procedure from being done in centres with similar expertise and resources.”

Writing in a linked Comment, Professor Simon Kay who carried out the UK’s first hand transplant, and Daniel Wilks from Leeds Teaching Hospitals NHS Trust, Leeds, UK say, “The present findings–and others–are encouraging, because this approach provides additional neural inputs into prosthetic systems that otherwise would not exist. However, the final verdict will depend on long-term outcomes, which should include assessment of in what circumstances and for what proportion of their day patients wear and use their prostheses. Compliance declines with time for all prostheses, and motorised prostheses are heavy, need power, and are often noisy, as well as demanding skilled repair when damaged.”

Next Story:
Boilersuit in a field [The Orb]