Texan-born singer-songwriter, Jarrod Dickenson combines folk and elements of country with sixties musical influences. With a gentle tone to his voice, combined with heartfelt lyrics with romantic narratives, there is a softness and vulnerability to his work. Now performing with his wife, Claire on backing vocals, as well as some duets together, his songs have added poignancy.

I spoke with him just before his set on Stage 2 at Cambridge Folk Festival.

SCB: How does it feel to be playing Cambridge Folk Festival?

JD: It feels wonderful. We’ve wanted to play here for years and years, so very happy to be here.

Your music seems to have become more varied over the years. Your first album, The Lonesome Traveller is very soft country folk whereas the new EP, Under a Texas Sky seems a lot more diverse. Is that because your musical tastes have widened or is it that you always had those influences and now have the confidence to bring them into your music?

I think the latter. I grew up with an old hippy for a dad so I grew up listening to The Beatles, The Stones, The Who, Paul Simon, Neil Young and Bob Dylan. So there was always this singer-songwriter folk side and then rock ‘n’ roll. Then for a long time, and still to this day, I’m heavily into the blues, people like Howlin’ Wolf, BB King, Muddy Waters. So all of that has always been there.

The Lonesome Traveller was very much a story-telling record, very much a folk record. Ready The Horses was a step into a more blues minded album and there are bits of R&B and soul in there. Certainly the new EP is going even further down that direction.

“Banning assault rifles should be a no-brainer”

There is a real sixties vibe in there, as well as a bit of surf and Cajun. 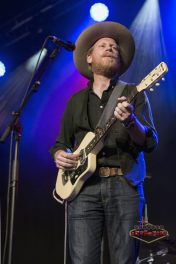 I’ll definitely take that as a compliment. With that EP we wanted to pay tribute to music from Texas and Texan artists. But I also wanted to show that Texas isn’t just country music, there’s a great history of rock ‘n’ roll, blues, jazz and R&B, so we wanted to pick little bits of each.

We also picked a few names that people wouldn’t be as familiar with. Esther Phillips is one that a lot of people may not know but she was a brilliant jazz and R&B singer. Try Me is just such a powerful and stunning song that we wanted to find a way to dive into it ourselves.

You’ve moved from Texas to New York to Nashville. How do you think that has affected your musical development?

I’d like to think that it’s impacted it. There’s also a bit of a delay with these things. I lived in New York for five and a half years and love it. It still feels like home to me but we needed cheaper rent. We needed a cheaper place to ‘not be’ as we’re on the road so much. So Nashville has been that place.

I do think that your surroundings play a big part and New York is a hard place to exist. It’s a grind, much like London would be. When I wasn’t touring, the day that I got back from being on the road, I was working seven days a week in a day job. So it is a struggle. But you’re surrounded by every culture you can imagine, and every type of person, which I think is important. It shapes your worldview and shapes you as a person and that’s always going to seep into your art.

Some country purists are very scathing about Nashville and about it being the commercial side of country. What is your take on that?

There are certainly things to be avoided in Nashville as far as I’m concerned. But to me that’s a different business altogether and it’s a different thing, it’s really the entertainment business and not the music world to me. It’s very manufactured and it’s for the mass market.

I’ve peeked behind the curtain and I’ve done songwriting, co-writing and sessions with people who’ve written enormous hits for people, and I’ve seen how they work. A lot of them are brilliant songwriters. Then there are a lot who just throw out the quickest cliché and rhyme that they can get. It’s just a different way to approach it. For me, there’s nothing personal about that and it’s hard to mean it if that’s your approach. I know that some people are really great at it but for me, I think that it has to tug at your soul a little bit more.

So that exists there, that industry and that world and machinery is still in Nashville but there are a lot of people moving from New York, LA, the UK and lots of different places. There’s a scene coming up in Nashville that is very honest and very devoted to the craft of writing meaningful songs, so it’s a nice place to be.

A lot of your music has a romantic quality and you work with your wife. How do you enjoy that? 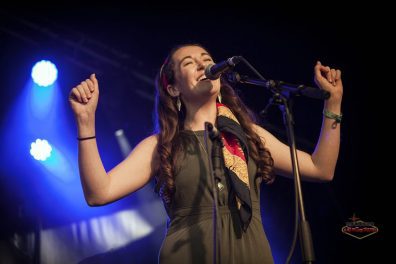 It’s not without its struggles financially with both of us being on the road all the time. It’s difficult to say the least. But very few people get to travel around with their spouse and even fewer get to work with them. We’re very fortunate and we’re trying our best to make that something that we do for a long time. It’s special to get on stage together every night.

Did you meet through music?

Yes, although in a roundabout way. My wife is from Belfast and I was playing at a songwriters’ festival in Belfast. She was in the advertising world at the time and was volunteering at the festival. We just happened to meet and hung out non-stop for two days straight. Then I was headed home. 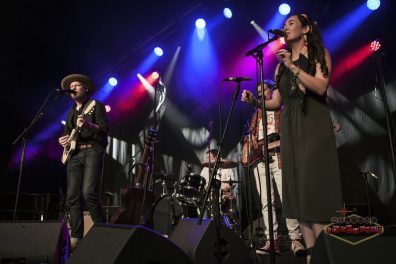 We were dating immediately long-distance New York to Belfast for three and a half years and have been married now for almost four years. We joke about it now because there were times when we would go for four, five, even six months without seeing each other and now I honestly can’t remember the last time we weren’t together every day, all day. Weirdly it’s been fine.

A lot of people say, is it hard being around each other all the time and never apart? But touch wood, it’s been completely natural. We’re very fortunate.

You’ve got a whisky tour coming up. How did that come about?

We wanted to do another tour in the autumn and we wanted to make it something different to what we normally do. So it’s going to be an acoustic tour, just the two of us, myself and my wife. We’ll be crowded around a condenser mic; both singing from the same mic, nothing plugged in. We’ll do acoustic arrangements of older songs and then play a few new ones as well.

But we also wanted to make it feel like an event more than just a gig. There’s a distillery in my hometown in Texas called Balcones and we reached out to them to see if they might be interested in joining forces and thankfully they jumped at the chance.

So everyone who comes in and has a ticket will get one free whiskey upon arrival. All of the venues have given their ‘ok’, which was nice of them. It’s going to be a fun tour and something different for the fans as well.

It’s not long since the EP came out but do you have any plans to record again in the near future?

Definitely, I’ve got a pretty big batch of songs that I’m itching to get in the studio and record. It comes down to when we can afford to do it. But hopefully in the new year, we’ll make another record.

It would be strange to speak to someone originally from Texas without mentioning the terrible shooting that has happened there today. What are your feelings in relation to that? 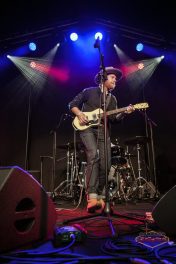 I think it’s heartbreaking and very avoidable. It wasn’t just Texas, there was one in Ohio as well, so two mass shootings within 24 hours, and a few days before that there was one in California at a festival.

Growing up in Texas, I know and am related to plenty of gun owners. That’s one thing but to not have common sense gun laws and make it that you have to jump through hoops to own them, that is the problem. Banning assault rifles should be a no-brainer. There’s no reason why the common person needs one or should have access to one.

I understand that in the States it’s a little different because the horses are already out, so to speak, but that doesn’t warrant complete inaction either. There are definitely things that people can do and policies that can be put in place that I don’t believe infringe upon anyone’s rights but also make perfect sense and also help to avoid this kind of thing. It’s ludicrous to me that we are the only major country that hasn’t figured out how to avoid this kind of thing. It’s very saddening and it’s very frustrating and it keeps happening and nobody’s doing anything about it.

The USA is quite a divided country at the moment. Are you hopeful for the future?

I think that you have to have hope otherwise it’s a pretty miserable place to be. It’s hard right now. It is much more divided than I can ever recall in my lifetime certainly. The current administration, a lot of the things that they say and put out there are stoking fires of race and gender inequality. It seems like they’re trying their best to drive a wedge between people. That may or may not be the intent but it’s certainly what’s happening. It’s strange, you almost can’t have a conversation with somebody without it getting heated very quickly.

It seems like most of the politicians are focusing solely on keeping power and making sure that their side wins, not what’s best for the people. That’s on both sides of it, that’s not a right-wing or left-wing statement. I think it’s very clear that both sides are engaging in playground nonsense. But there has to be hope for the future otherwise what’s the point.

Let’s end on a positive note. You’re working a lot at the moment and touring – how do you relax when you get the chance?

That’s a good question. We’re on the road most of the year. Whenever we are off the road, we hardly ever leave the house! Once you’re at home and in your own bed and on your own sofa, it’s hard to want to leave, especially if you know that you’re back at it again in a week’s time. So we stay home, I read and it’s usually when I try to write as well, so the work never really stops but it’s good to work, it’s what I enjoy.

The Unplugged and Distilled Tour comes to various UK venues during November and December (some dates are already sold out) –  details here.