Whilst his contemporaries fall to the inevitable attrition of the years, Perry endures with the resilience of an earworm Melodica topline.

‘I am the Upsetter…. You’ll never get away from me’

But he’s still here, so you can’t help wondering if perhaps he was right. 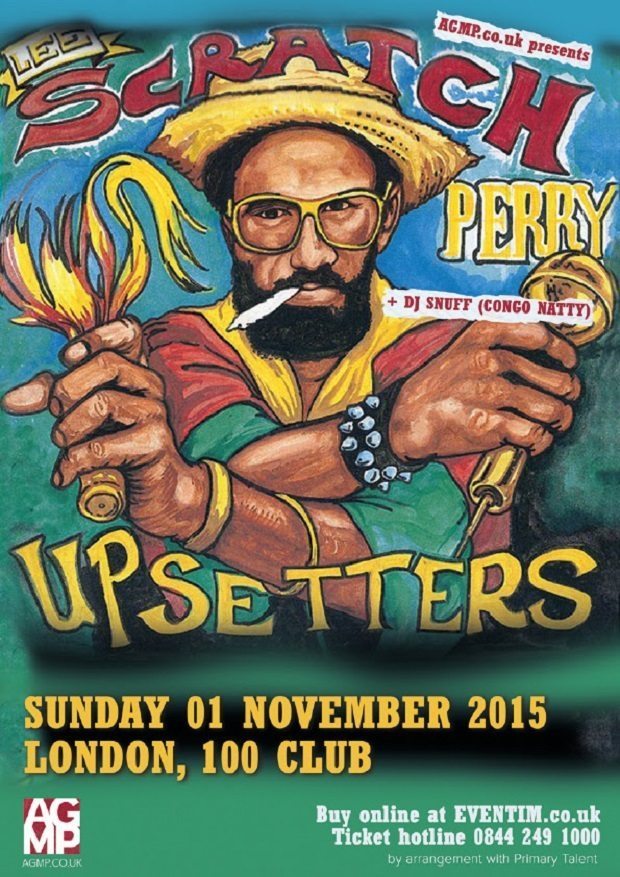 AGMP.co.uk presents
LEE “SCRATCH” PERRY
& the Upsetters – in concert
+ DJ Snuff ( Congo Natty )
Lee “Scratch” Perry is a Grammy award-winning reggae and dub artist, who has been highly influential in the development and acceptance of reggae and dub music. He employs numerous pseudonyms, such as “Pipecock Jaxxon” and “The Upsetter”. Arguably the first creatively driven, “artist-producer” in modern recorded music, Lee “Scratch” Perry occupies the highest level of music making – standing comfortably next to pioneers like George Martin and Brian Wilson.
Lee “Scratch” Perry started off working with Clement “Coxsone” Dodd’s Studio One & Joe Gibbs Wirl Records before forming his own label – Upsetter Records – in 1968. He worked with his studio band The Upsetters until 1972. In 1973 he opened his legendary Black Ark Studios and produced such notable musicians as Bob Marley & the Wailers, The Heptones & Max Romeo. As one of the producers who helped create Dub Music in the 1970’s it was only right that he would then go on to work with both Adrian Sherwood & Mad Professor in the 1980’s.

Next Story:
I want to party hard, but you won’t let me (Best Friends. Sebright Arms)