I want to party hard, but you won’t let me (Best Friends. Sebright Arms)

Where is the quirky charming genius of ‘Surf Bitches’, ‘Nosebleeds’, ‘Happy Anniversary’? I want to party hard tonight but you won’t let me. Best friends

[dropcap style=”font-size:100px; color:#992211;”]I[/dropcap]
‘m dipping my toes into piranha infested waters this evening, occasionally withdrawing them, and then dipping them in again.

You know, just for kicks, and I was not expecting to be doing that. Food for fish, that’s what I’ve been served and my order has come with an unexpected side of road-kill (and just in case you wondered, no, I am not enjoying my dinner, sirs).

Something truly alarming has happened since late 2013 and I wonder whether my more scientifically inspired scribes on the magazine can clear something up for me: is there a correlation between hair length, marijuana ingestion and a sudden migration of talent to a distant place? (with the obvious exception of Hawkwind, whom Best Friends may be trying to mimic now, but even then I’m not convinced). 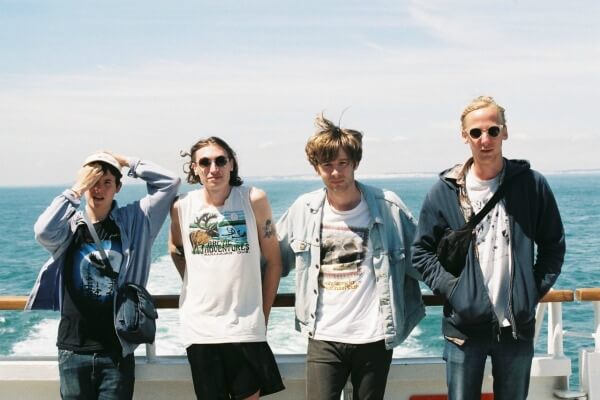 I’m trying my hardest to fathom out where on Terra – that’s Earth dontcha know – the talent may have gone. Such a disappointment.

Best Friends rightly claim to party hard on their Bandcamp page, and on the evidence of what’s on there I am inclined to agree. However, not tonight folks. This is drudgery: idle, unimaginative and devoid of charm (although the same cannot be said of the band themselves who I found to be really very affable). It feels like they are wading through excrement and we’ve all been invited to share the experience. I’d rather eat my own pancreas.

Where is the quirky charming genius of ‘Surf Bitches’, ‘Nosebleeds’, ‘Happy Anniversary’? [Editorial note: band thinks different see end of article for clarification] I want to party hard tonight but you won’t let me. These golden nuggets of surf-punk bonkers-ness and life affirming beauties are not played. I want to pogo and shape-shift into a Cheshire cat but am left feeling like Bagpuss. (Is that a hand up my arse?!! Arrgghh!!)

I suppose the problem today is that any band anywhere can only very publicly change direction, what with the interwebs an’ all. Back when I started you could only let yourself down at sporadic gigs in front of a pair of cockroaches on a date, two men and a yawning dog, seen and heard only through the fug of cigarette smoke, and it needn’t have been advertised, anywhere.

Your back catalogue stayed right where it should have done: buried in the same plot as your deceased goldfish or hidden in your parents’ loft. Or ceremoniously incinerated before embarking on a life in the gilded corridors of the establishment, your musical soiree a distant memory. Or, you learned pretty sharpish what you were good at and developed it. Honed it into a state of near perfection.

Mind you, there are benefits to having your earlier material readily available: Best Friends do now need to revert to their back catalogue, pronto, for inspiration again.

Gentlemen, your personal charm aside and that of your loyal friends and PR team, if you are going to go all Spinal Tap on us (“We hope you like our new direction?!”) then please provide signposts to the exits. Your two minute pop genius moments cited earlier, I love, but little point in advertising them online if you have no intention of playing them. Long hair rocks and I have no issue with marijuana enjoyment, but if a trip to the barber’s and a change in your smoking habits would inspire a return to past glories, then that I would welcome. And the artwork I love. At some point 10 minutes into the gig I had to reconcile that from memory, just to be sure I was actually watching the same band. Seriously.

Editorial note: The band asserts that not only were the song in questions played but that there hasn’t been a ‘departure in sound’ as:
“…anyone who has watched us over the past 2 years will have heard pretty much all the same songs, the album is a collection of songs we’ve written over the last couple of years and songs we’ve always played live.”

Boho skeleton and full time professional clownfish who understands the fine line between nuance and nuisance. After a lifetime of playing guitar and writing, he ought to.

Next Story:
Dither, and the Cat Dies. Quantum Probability and Irrational Decisions