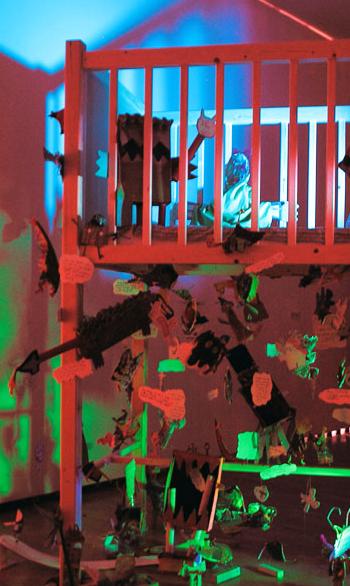 Homelessness, abuse, poverty. Who do you envisage? How can they put themselves in this situation? Why don’t they just get a job like everyone else?

Today’s society has become accustomed to these comments. We place ourselves above being in such a helpless state, but these people have found themselves forced into this life. They are not like everybody else, they are children. Vulnerable British children, many of whom are their parents’ carers. The recent Royal Academy of Arts collaboration with the children’s charity Kids Company tells the heroic tales of these children. 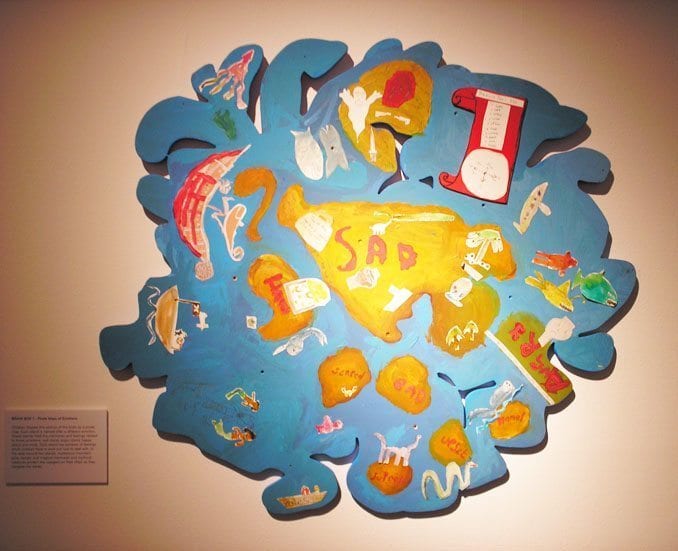 Childhood – The Real Event was conceived to celebrate these London children’s achievements whilst capturing the difficult hurdles they face growing up.

Kids Company, founded by Camila Batmanghelidjh in 1996, supports vulnerable inner-city children. Having reached over 17,000 of them across London in the past sixteen years, this is the first time the RA has dedicated serious space to the art of children.

When I first heard of the exhibition I knew it would be special, not only because I am aware of the charity’s work, but because the show is in the heart of Mayfair (for all non-Londoners that’s the purple street on the Monopoly board… the expensive one). Every boutique whiffs of tweed jackets, home to the original wearers of Barbour branded togs. Friends of the RA occasionally drop by for afternoon tea and a good ol’ read of The Guardian. My heart beamed with excitement knowing these ‘friends’ were at the forefront of social discovery.

Located at 6 Burlington Gardens (the building directly behind the Royal Academy) I am critical of how far removed the exhibition would be from the consciousness of the Academy visitors. Having said that, a stroll through Burlington Arcades is not only inevitable but a must for pre-show appreciation! Heralded as a ‘true luxury landmark in London’, I fluster by as I scramble through the swarms of American tourists while imagining “this would be the ideal place to buy a pearl necklace”. My trail is cut short as I almost walk into the Shoe-Shiner…. Seriously. A SHOE-SHINER? For 30 seconds I am somewhat shocked, but then again, the arcade is nearly 200 years old so why not show a bit of  British ‘authenticity.’? 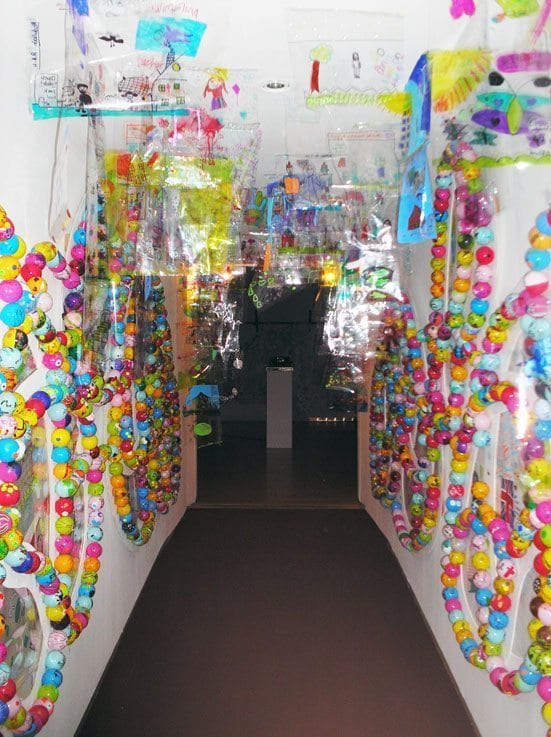 As I walk up the stairs in this comparatively quiet building I wonder if there will be many people today. Pink..green..yellow…blue are all I can see. The gallery has constructed a narrow sloping walkway. 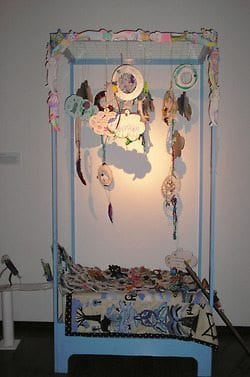 I am unclear at what the rest of the exhibition will hold, but right now I am ecstatic at the popping colours which seem ever so much brighter against the dullness of the passage.

Cellophane pictures hang from the ceiling containing children’s dreams: “I want to be a footballer” is regurgitated again and again, “I want to live on the moon”, “ I want to be happy” . In ‘Tunnel of Dreams’ the Smartie-covered walls cause me to realise that living in a Victorian sweet shop would really be this brilliant! Instantly my joy alters to confusion with twinges of distress. I have reached the end of the tunnel and I am caught in between the heckles of two giant ‘Jack in the Boxes’. Their size overwhelms me, and all I can do is stare, readjusting my eyes to the suddenly darkened room, trying to rationalise who they are talking to? 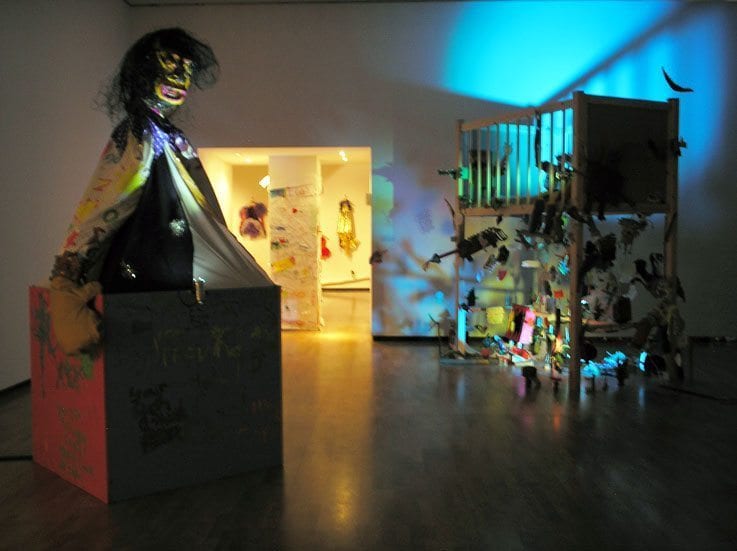 I listen as the two exchange words: “What’s wrong with you?” “You’re my beautiful child” “You’re useless, I can’t stand being around you” “You can achieve anything”. I start scribbling the contradictory statements down, smiling to the “You’re just like your Dad” comment (said as a derogatory statement). Unfortunately for me I was told as a child that I was just like my Dad and my Mum, by both parents. It makes you realise how significant and consequential childhood experiences can be. 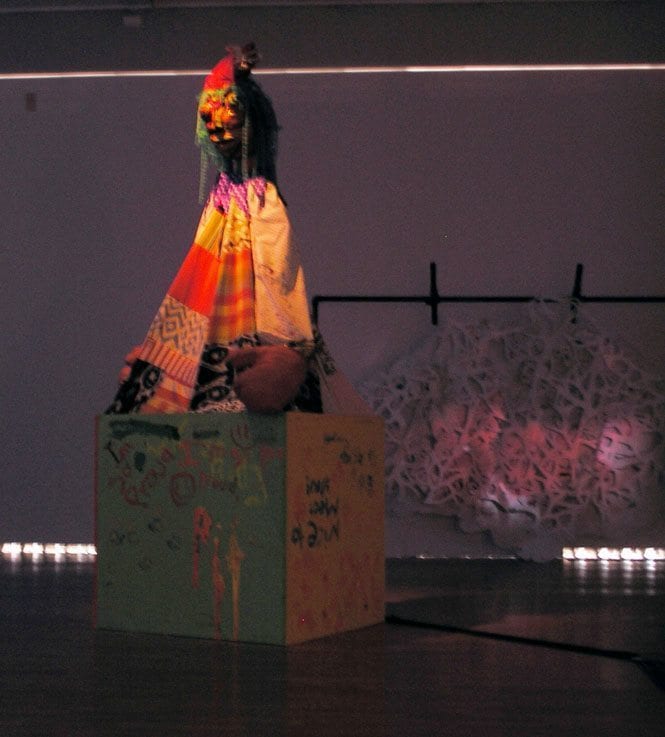 Feeling a little guilty for thinking the exhibition would be a white square room filled with childhood paintings, the Jack in the Boxes are not the only interactive element. The exhibition is enormous, filling five gallery spaces. Initially I ran through all five spaces, as I couldn’t wait to see each room (filled with drawings, sculptures, poems, textiles, video performances and mini installations). The work is vibrant, honest and sophisticated, created by children and young people aged 6-23. In their relatively short existence these children have had bucket loads of ‘real’ life experience. At the height of a summer of celebrations and heroic achievements it’s here that you can experience “the poignant achievement of children who have overcome unimaginable challenges”

Each room entraps you as expected chihood anxieties of ‘monsters under the bed’ and apprehensions of growing up are placed side by side with the realities of homelessness, pressures of gang life, hunger, and sexual abuse. A prominent constant in the show is the installation ‘The Human Race’. This is a running track made of cut up loo rolls. It starts in the second room, progresses over the stairwell and into the third room. The track “represents the journey through childhood as the children, as athletes, navigate and overcome obstacles” and is filled with messages of accomplishments, for instance one child who “would like a medal for sleeping on the floor”

We offer unrelenting love for every child, whatever it takes

It is apparent that trust has become synonymous with success, a tool which Kids Company use constantly, as reiterated by founder Camila Batmanghelidjh: “Our aim is to empower children who have experienced enormous challenges to lead meaningful lives. We offer unrelenting love for every child, whatever it takes” The security of Kids Company has empowered every child to safely vocalise very real feelings that are often not allowed.

The curation from Kids Company has to be applauded as the last piece is as impactful as the first (what am I saying? It’s MORE). After the third room there are two smaller rooms, one with a video installation, and then the fifth and last (I wish I could talk about every single piece but I wouldn’t want to ruin the experience). Visually the room is a stark contrast: a naturally-lit room which already contains a ‘proper’ old fireplace, the perfect touch which allows me to envisage this scene in anybody’s house.

a cloud of bubblegum pinkness

A child’s bed sits in the middle of this small room. This little girl’s bed is a cloud of bubblegum pinkness, a glaringly pink bed frame with clean and crisp Disney princess bedcovers encapsulating the sculpture of a girl. She appears to be the ideal vision of a little girl dressed in a baby pink party frock made of sheer organza, intricate flowers are embroidered all over, embellished with pink beads…beautiful!

She lies naively with her legs sprawled slightly apart, yet her expression is strangely blank. There is no one else there, there are no words or drawings, no voices. A  collection of men’s shoes hangs over the little girl’s face and body like a baby’s mobile. The men are not given an identity, after all, this has no relevance. The installation has been made by children who have all been sexually abused. Here they depict a safe environment illustrating the vision of the ideal little girl’s bedroom. 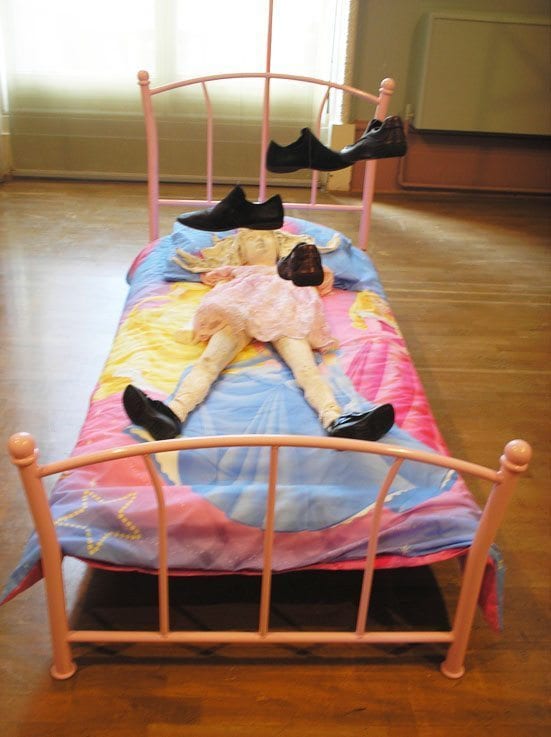 In 2007 Kids Company was awarded the Liberty and JUSTICE Human Rights Award. In 2010 they were selected as a ‘Child Poverty Champion’ by the End Child Poverty project for the success in enabling children to achieve their full potential. Kids Company’s success rating has much to do with its focus on arts as part of the children’s recovery. Says Batmanghelidjh “Art unfreezes trauma from a state of explosive potency,”

After leaving the exhibition I run across the street to buy another memory disk for my camera so I can take even more pictures. The only disappointing thing is that the show ends July 22nd, just before the official start of the Olympics.

I am not sure, but I do hope Kids Company carry on exhibiting. Hopefully one day, nationally. 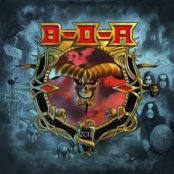