Cross My Heart: Franko B 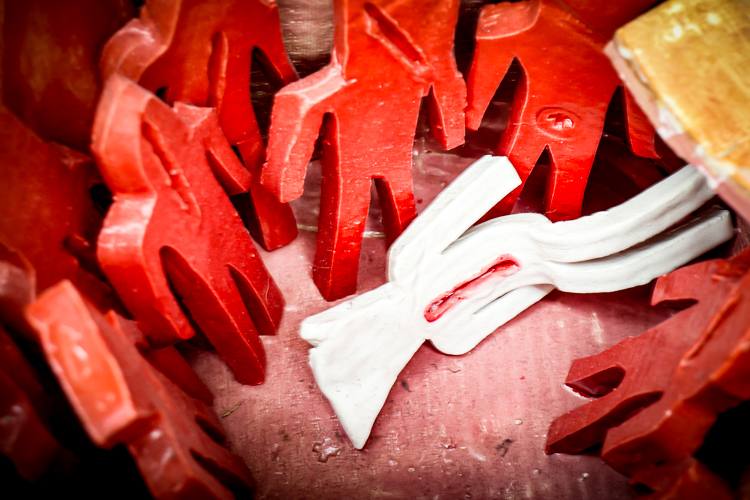 In England, Franko B is best known for his body art, and in particular, the bloodletting shows of the 1990s and early 2000s. In other countries, it is his sculpture, stitching and drawing that keeps the critics talking. But sculpture was his first medium, and it is the one to which he has returned in his latest show.

Before we get there, though, Franko provides a tour of previous works. We were at New Art Projects gallery in Bethnal Green. It is not the first time he has exhibited in this particular part of London. His famous performances in the 1990s took place in galleries around the East End and at the ICA. A blinding apparition, Franko B’s tattooed body was naked but for a coat of white pigment. He smiled, revealing depths of compassion and kindness and teeth cased in metal. This man and the symbol of a cross pointing in the four cardinal directions seemed to wait for something. The spectators were kept in darkness. Franko’s painted face kept smiling. But it offered no mercy. The eye was drawn to the glint of a blade. Red gloss streaked the white pigment of Franko B’s body.

‘When people used to say, “That’s shocking”, I thought it was pathetic to call me shocking. Every day we see shocking things. Poverty is shocking. Homelessness is shocking. Rape is shocking. State abuse, educational abuse, class abuse… it’s all shocking. I am an artist and an artist is a witness of history.’

History permeates Franko B’s work. It might look like personal history, but the history and the future he imagines is made of people other than himself. The dead are the material of his work and with the dead come numbers. This is where the ceramics come in. The tiny painted porcelain figures who line the walls of his show are arranged first as a heart then as a cross. He has forgotten no one.

The work is inspired by the Red Cross kids he met when he was institutionalised as a child.

‘But also it is about all the people I lost in my life. They break, they die. These little men break like people. Or they break you. It goes beyond me and my experience. It becomes universal. Middle-class people, art critics, curators put everything in a context that is autobiographical. But that isn’t coming from me. It’s about everyone. I’m saying you’re not alone. The moment you come out of the womb you suffer. ‘

Autobiographical or not, Franko B’s background does inform his work. As a survivor of the Italian orphanage system, his wounds in the 1990s opened a channel of communication with the foundlings he met at the Red Cross. His peers, for the most part, disappeared, or they became the junkies, whores and homeless we pass in the street. Unlike us, Franko B does not look away. The love he feels and the vulnerability he expresses are almost painful to encounter. His work shows us the machinery that is at work in our world; the machinery of factories and hospitals; institutions and the rituals of religions. The question comes to mind: where’s the love?

The answer is in the work.

‘When my students ask me about success, I say that success means making the work that is important to you.’

This newest work finds him returning to his first artistic passion: ceramics.

Here the works are misshapen oddities inspired by Richard Serra and off-cuts from his previous collection that revolved around institutions. Whereas the older work shows figures trapped in box-shaped buildings, suffering the claustrophobia of being unable to express their individuality, this later work is a flowering. It is as though the earlier figures have escaped to take the shape they were always meant to be. Franko likes to play and these, newer figures are the children of his imagination in the way that the children of his earlier work were the victims of the institutions that contained them.

‘One day, I scratched on the back of a mirror and painted over it. It just happened. It was spontaneous. Anything can be my material. Everything works to transform language into art.’

The newest work, the ceramics, stand on a shelf, gleaming white with intriguing textures, the shapes writhe creating a rhythm.

‘It’s about the soul,’ he says. Look again and the sculptures are exploding like flowers caught in the moment of blooming.

‘When I first found clay, it was the 1980s and I finally had a channel that wasn’t drugs or anger. I could express the image that was in my head, which is the same image I’m producing now. I recently set up my own studio. I can do things with my hands, I can get dirty, I can be a child. I can be light-hearted. It doesn’t matter.’

A founding myth of fine art that has long been forgotten was handed down by the Roman philosopher, Pliny the Elder. In his journal, Pliny reports that the Corinthian potter Butades (of Sicyon) had just invented a portrait-like picture in clay with the help of his daughter Debutadis, who ‘for the love of a departing young man, outlined on the wall the shadow of his profile by the light of a lamp. ‘ Old Butadis sat at the potter’s wheel. While his hands formed vessels out of formless clay, his eyes followed his daughter’s drawing. He then fired the likeness along with his pots and ewers.

This might seem a strange link to the work of Franko B, but the process of production in Butades and Franko B is remarkably similar. Clay, the ‘primordial material’ serves for both works of art and household goods – statuary and pots. In both instances, the object’s aim is longevity. For fine art, there is an added incentive to produce a lasting memory. Butades’ ‘portrait-like picture in clay ‘ did just that. His rough-hewn statue was born from love and the notion of losing that love. The same impulse governs Franko B’s work. The memory of ‘Lost Boys ‘ (the title of his last exhibition’ or just lost love lost becomes an image that presses on his mind.

‘I am driven by an image I have in my head. Essentially, I am a failed painter. I say this as a fantastic thing. Because if I wasn’t a failed painter, I might have got an MA as my tutors suggested. But I would not have achieved what I have achieved. Art school was like a factory. I wanted to experiment. For years, I was working in a kitchen so I didn’t want to repeat myself. I took a risk and kept doing different things. I did what was necessary. In that, I haven’t failed. I’m still travelling. People ask me if I am still bleeding if I am still doing body art. I still work with my body. I still have a body. Everybody is a body artist.’

Resilience, remembrance and reconciliation. If Franko B’s religion is art, then it’s a religion in which love is god.

Photographs Courtesy of the Artist