A crazy band who make crazy music, then. And their latest album is suitably mental. 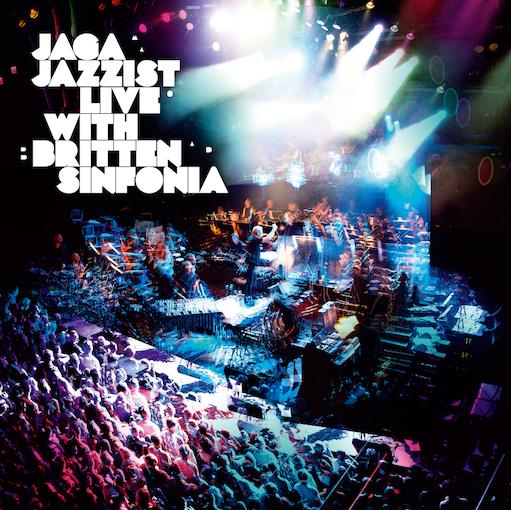 [dropcap style=”font-size:100px; color:#992211;”]T[/dropcap]he thing I’ve always liked about Jaga Jazzist is that they are absolutely bonkers.

A 10 piece band from Norway, they’re often described as “experimental jazz”, but that doesn’t really do them justice.  Certainly it’s the best way to describe a lot of their music – mainly because “experimental jazz” can mean just about anything – but it doesn’t account for the times that they come out with crazy electronica, prog rock, or cinematic lounge music that makes you want to don a smoking jacket.

A crazy band who make crazy music, then.  And their latest album is suitably mental.  Born out of a collaboration with the Britten Sinfonia (an associate ensemble of the Barbican) and recorded live at that venue, it sounds like it should be a terrible idea.  Live albums are tricky beasts at best, and the idea of a live album where some mad Scandinavians team up with an orchestra to make experimental jazz sounds like something that only the most painfully right-on, sandal munching Guardian reader could like.

Fortunately this is not terrible.  It’s brilliant.

The opening track, “One Armed Bandit” is almost a microcosm of the whole Jaga Jazzist album.  Taken from their 2010 album of the same name, like several of the songs here, but rewritten for this performance, it moves from an orchestral opening that is part film score and part ballet, into a trombone-led section that is equally cinematic, but much more jazzy – like something out of a French 60s film.

You can see a Parisian in a trenchcoat smoking moodily.  In fact, you can almost smell him.

And suddenly, you have a vibraphone (I think),

a crazily catchy synth line (possibly still on the vibraphone) and a fuzzy guitar line straight out of Weather Report.  Just when you’re getting used to that, a slide guitar that is part country and western and part Chinese style violin line comes in, along with some squelchy Fender Rhodes, and the piece takes off again, somewhere else.  It’s like listening to someone channel Lalo Schifrin, Rick Wakeman at his cape wearing craziest, and kids’ TV from the 80s all at the same time.  It’s 15 minutes well spent. jaga jazzist jaga jazzist

The rest of the album continues in the same helter-skelter vein.  At times it’s much more straight up jazz, with “Kitty Wu” using the orchestra to good effect to flesh out a track from 2003’s The Stix, and the extended trumpet solo on “Bananfluer Overalt” revelling in all the improvisory space it’s given.  “Music! Dance! Drama!” manages to simultaneously sound like the rock driven jazz of Polar Bear or Acoustic Ladyland, Holst-ian classical music and incidental music from a 70s sci-fi epic.  Elsewhere there are bass clarinets that could come from Peter & the Wolf, beautiful saxophone lines, and sections that can only be described as jazz chase scenes.

All in all, then, this is a breathless ride, but one that is supremely enjoyable.  It’s ambitious without being inaccessible, epic and accomplished without seeming pretentious, and above all else, it’s fun.  Listening to this album is not like the usual “Live…” experience of hearing songs played slightly worse than they were on the record.  This feels like being taken on a ride, and being part of something that could only be live – could only have happened in that place, then, when it was recorded.

A crazy album, from a crazy band, then, but one that you should definitely have a listen to.  You can’t help feeling that the people who got to see it in the flesh were very lucky, but for the rest of us, this is a pretty good way to see what me missed out on.

One Reply to “Jaga Jazzist : Live with the Britten Sinfonia”