[dropcap style=”font-size:100px; color:#992211;”]A[/dropcap]lexis Peskine’s Power Figures at October Gallery are steeped in the presence of ancestors combined with personal and collective narratives that make up the “Black Experience”.

In Peskine’s first London solo exhibition he confronts past and present sufferings of diasporic peoples of colour by transforming his anger at widespread and long-held racial discrimination into empowered imagery.

Peskine was raised in Paris by his Brazilian mother and French-Russian father, where he was often harassed by police because of the colour of his skin. During this time the artist also became aware of discrimination infiltrating wider social issues such as housing and employment, as well as the circulation of derogatory media. These experiences generated Peskine’s interest in exploring racial dynamics and identity politics through the artistic medium. He states in the accompanying catalogue,

If I spoke out as a Black person in France, no one would be interested. But by weaving these issues into my art, I’m allowed to talk about things without being dismissed, and people start taking an interest in things they wouldn’t normally notice.

The exhibition is primarily comprised of Peskine’s signature mixed-media nail portraits on wooden board, the material’s roughness accentuated by coffee and mud rubbed into the surface. Wooden floors and tables adorning the gallery enhance this rustic effect, generating a sense of warmth and belonging that opposes a traditional sterile white walled exhibition space. In contrast to the incorporation of everyday materials, the figures in the portraits are composed of black block colour; the crisp edges create a pop-art quality that references Peskine’s background in graphics design. This blunt mass-production-style gives the figures an intense presence, unapologetic for the colour of their skin.

Peskine’s unique technique of piercing nails into wood is reminiscent of the Nkisi N’Kondi “Power Figures” that represent sacred ancestors created by the people of the Congo Basin as tokens of protection and healing. His exhibition title is inspired by these ritualistic objects, associating his portraits with similar protective and empowering qualities that are necessary within the harsh realities of a discriminatory world. Whilst nailing metal into wood is a violent act in itself, within the context of the “Power Figures” portraits it takes on more positive connotations. Furthermore, these fundamental building materials create structural support, or, in the context of Peskine’s works, a psychological support that helps heal the trauma caused by racism, slavery and inequality. However, unlike in buildings where nails remain hidden from view, these are exposed, acting as a metaphor for the unacknowledged and unseen efforts and successes of marginalised groups. By bringing the nails to the fore, the features, pain and strength of these people become visible. 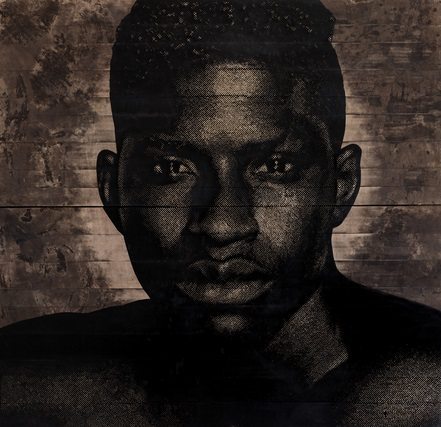 Reminiscent of Roy Lichtenstein’s oeuvre, the nails create a sense of dimension and depth through producing a dot-like effect on the wooden board. The extent of this intricate craftsmanship only becomes apparent when looking at the works up close, revealing the source of the illusion. Each figure shifts between the three-dimensional and two-dimensional as the viewer walks around them. Opulent detailing of gold or silver leaf adorning each nail’s head transforms the objects, literally allowing them and the figures they shape to be seen in a new light.

The physicality of the nails heightens the sense of presence, strength and power evoked by the figures as each looks out at the viewer, their gazes unwavering and impenetrable. Each commanding stare creates a sense of energy and life force that counters the vulnerability that a history of racism has engendered. The figures not only address the viewer, but are also in dialogue with one another. Several portraits are hung opposite each other, allowing them to feed off a mutual confidence and proudness. The subjects themselves are both known and unknown to the artist. For Peskine, the focus is on the collective experience, standing for something greater than the individual sitter.

The large centerpiece work entitled “Power” conjures a slightly different mood to the other nail portraits. It consists of two figures instead of one; both have their eyes closed, the father protectively placing his hand on his daughter’s shoulder. Whilst less overtly commanding, there is a sense of love and warmth that evokes a quiet strength and resilience. The exhibition also consists of photographs featuring young males wearing space-like outfits made from food packaging. Their unusual clothing perhaps makes reference to the feeling of being “alien”. Some of these photographs feature men addressing the viewer with Peskine’s signature commanding stare, exuding pride in being different and unique. A film accompanies these images, showing scenes of these protagonists amongst other footage.

Peskine’s works embody his sense of obligation to express the unsung voices of the past and present, infusing them with power and hope for the future.

Next Story:
Mummy’s Boy/Daddy’s Girl, or the Opposite? Do Dads Favour Sons?