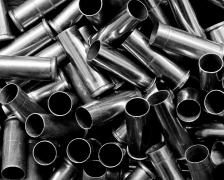 [dropcap style=”font-size:100px; color:#992211;”]I[/dropcap]n a dramatic denouement of the inpenetrable mysteries of the bleedin’ obvious, US researchers figure out that restricting ‘criminals, perpetrators of domestic violence, youths under age 21, substance abusers, and those with severe mental illnesses’ from owning firearms might reduce gun violence.

Also in today’s news: Sun is Hot, Pope is Catholic, Bears shit in the woods.

On July 20, a gunman in Aurora, Colorado, used an assault rifle to murder 12 people and wound 58 others. Although this was one of the worst mass shootings in U.S. history, all mass shootings account for a small percentage of gun violence that occurs in the U.S. every day. In the past 100 days since the Aurora shooting, an estimated 3,035 Americans have died as a result of gun violence.

A new report by researchers at the Johns Hopkins Bloomberg School of Public Health examines policies and initiatives for reducing gun violence in the U.S. by reforming current gun policies. The report, a synthesis of prior research and analysis conducted by researchers with the Johns Hopkins Center for Gun Policy and Research, includes the following key findings:

Easy access to firearms with large-capacity magazines facilitates higher casualties in mass shootings.
“Right-to-carry” gun laws do not reduce violent crime.
Prohibiting high-risk groups from having guns–criminals, perpetrators of domestic violence, youths under age 21, substance abusers, and those with severe mental illnesses–and closing loopholes that enable them to have guns are integral and politically feasible steps to reduce gun violence.

“Mass shootings bring public attention to the exceptionally high rate of gun violence in the U.S., but policy discussions rarely focus on preventing the daily gun violence that results in an average of 30 lives lost every day,” said Daniel Webster, ScD, MPH, director of the Johns Hopkins Center for Gun Policy and Research and lead author of the report. “Addressing weaknesses in existing gun laws by expanding prohibitions for criminals, perpetrators of domestic violence, youth, and drug abusers, and closing the loopholes that allow prohibited persons to obtain guns can be effective strategies to reduce gun violence. It is important to note that making these changes to our gun laws would not disarm law-abiding adults.”

According to the report, guns were used to kill more than 31,000 people in 2010, including more than 11,000 homicides. The homicide rate in the U.S. is seven times higher than the average of all other high-income countries because the U.S. firearm homicide rates are 22 times higher. A 2012 study examined the direct and indirect costs of violent crime in eight geographically diverse U.S. cities, and found that the annual cost of violent crime averages more than $1,300 for every adult and child.

The authors point to numerous weaknesses in current gun laws in the U.S., which make it harder to keep guns from high-risk individuals. For example, compared to other age groups, 18- to 20- year-olds are the most likely to commit homicides, yet only five out of 50 states prohibit this age group from possessing handguns. Additionally, the report identifies several federal laws that have been enacted to protect licensed gun sellers from oversight and reduce sanctions for law violations, and a key loophole that exempts gun purchasers from background checks if they buy guns from private sellers.

The report cites studies which found that fixing lax gun laws reduces gun violence and associated costs. When states expand firearm prohibitions to high-risk groups and adopt comprehensive measures to prevent diversion of guns to prohibited persons, fewer guns are diverted to criminals and there is less violence.

While some polls indicate declining public support for stricter gun laws, Webster cautions against inferring that the majority of the U.S. public doesn’t want lawmakers to fix weaknesses in current laws.

“Many people don’t realize that, in most states, individuals convicted of violent misdemeanors with court-issued restraining orders for domestic violence or who have a serious history of mental illness or substance abuse, can legally possess firearms,” said Webster. “Federal gun laws allow private gun sellers to sell their guns with no questions asked of purchasers or proof that the purchaser has passed a criminal background check. Survey research shows that 82 percent of gun owners want that loophole fixed.”

The report also addresses the Constitutional legality of the reforms posed in the paper, and finds the Second Amendment to the U.S. Constitution would not prohibit the kinds of gun policy reforms in the report.

“The Supreme Court struck down laws in Washington, D.C. and Chicago that banned handgun possession in homes. However, since these rulings, lower courts have overwhelmingly upheld the constitutionality of a wide range of gun control laws other than the handgun ban,” said report author Jon Vernick, JD, MPH, co-director of Johns Hopkins Center for Gun Policy and Research.

Despite the majority support among the general public and gun owners to remedy several current weaknesses in U.S. gun laws relevant to keeping firearms from dangerous people, the majority of gun-related state and federal laws passed in recent years have made it easier for high-risk people to purchase guns.

“There are real political hurdles to enacting new gun control laws, but politicians need to realize three things, there is broad support for policies keeping guns out of the hands of high-risk individuals, the reforms are constitutional, and the policies would save the lives of innocent Americans,” said Webster.

Next Story:
The Vudu Experiment