All Wrong: the misguided adventures of an art world hero (Grayson Perry)

The roving potter lines up his newest quaint exhibits: the northern working classes

[dropcap style=”font-size:100px; color:#992211;”]Y[/dropcap]ou know you’re in trouble when Grayson Perry; artist, potter and now societal commentator turns up in your neck of the woods sporting a sympathetic smile wanting to celebrate your culture (or lack thereof).

Perry is currently on television with All Man for Channel 4, where he’s exploring ideas of masculinity. His first stop was my own old stomping ground, the north east of England. There, he concentrated on two great obsessions of the region, 1) the old mining culture and the devastation of the industries in general over the last decades and 2) the popularity among men for mixed martial arts, fighting clubs, boxing and so on.

The style of Perry’s exploration was more David Attenborough than Louis Theroux, observing the culture from a strange sanguine outsider status rather than offering any real insight or useful criticism. His level of comfort around the violent men and the bereaved mother he encountered (Thelma) a result of his entirely unchallenging position on either the ideas which underpin their lives, or the ways they couch the problems of either the death of a culture (industry) or the death of depressed man.

Perry is worth considering seriously. He isn’t only a successful artist, which is well known, but is, due to many television appearances and programmes, a successful broadcaster. On the back of his 2013 Reith lectures he is also taken seriously as a public intellectual, more recently he was invited to advise a group of art university bigwigs on what should be taught in art schools. Clearly Perry has captured the zeitgeist and he certainly represents, even personifies, a sensibility which has grown in the arts, outstripping the old money, money, money ethos of the YBAs. So what’s the problem? The problem is something like Stanley Fish’s notion of ‘Boutique Multiculturalism’:

This idea was meant to help ethnic communities recognise the fact that certain people enjoyed their food and talked about equality, but drew the line at anything that might actually change the status quo. The fact that I can credibly employ this notion in the context of Perry’s program is a testament to growing economic and cultural divisions within British culture, without race even being an issue.

Put simply, Perry offers affirmation and reassurance. He doesn’t question any narratives nor does he posit any alternate projects for either the old men with their banners, or the young men with their broken knuckles. There is one scene where he does speak truthfully: on being asked if he has ever been in a fight he replies ‘Yes when I was a kid, but I didn’t think, “I must get better at this”!’. That’s it, the one comment that acknowledges his own appreciation of creativity and intellectual pursuits, and its lost in in-jokey, matey ribbing.

More poignantly, he is patronising and self-indulgent at the same time (a self-indulgent man patronises himself!). He declares that one of the fighters studies Homer alongside his fighting. We then see three skinheads watching Troy with Brad Pitt. This is hardly the same thing as studying Homer, Grayson. Really. 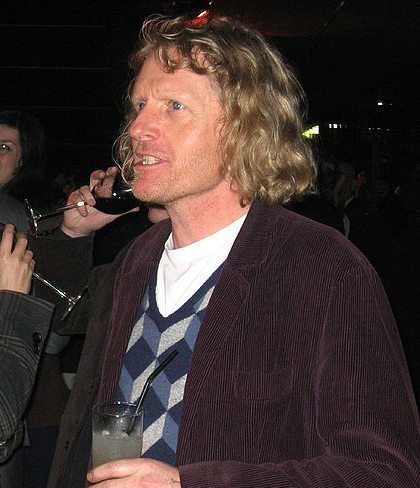 Then he moves more and more to making the program about himself. Even the dead son of a local woman isn’t enough to pull focus from the much-publicised problems Perry himself had with the loss of his father and antagonism with his stepfather. The final moment where he dramatically unveils a pot in a church is comedic in its Alan Partridge levels of hubris. The banner behind it shows a small boy between an old worker and a new fighter.

This is not just a symbol of the region’s struggle, but is actually him between his father and stepfather, he tells us. The economic and cultural struggles of countless men and women a mere footnote in the life of a grown up little boy.

Having attacked so vehemently the YBAs when reviewing Gavin Turk’s show at the Freud museum, it’s only fair to subject their usurpers to the same level of criticism. Grayson Perry and those who think within the same framework will dominate the arts for a long time to come. They are currently in fashion, but beware the old YBA wolves in Perry clothing. They are not nasty people, but their sympathy will never help anyone to break out of rigid thinking.

Perry challenges the viewer’s assumed snobbery and suggests that maybe the fighters have it right. Well no, I grew up as working class boy in the north east, fighting in school and lamenting poverty. I have heard many stories of victimhood which accompanied violent men and rationalised the trap they make for themselves. My own message to the men of that region, a message that Perry can’t give them, is this:

It isn’t ok to respect only the strength of the body or to remain mired in the past. Stop dicking about and learn, learn, learn. For all your strength, not one of you noticed you were being mugged off by a smug, smiling liberal pseud.

That’s the sort of feedback you can only get from one of your own. In anthropology there is a divide between those who help tribes to modernise and those who encourage them to remain the same; grass skirts, war paint and all. Mostly these tribes, when they see electricity, clothing and mass-produced tools, want to use them and want to change. This doesn’t mean they have to lose what makes them who they are. Heaven help the tribes who embrace their so-called authentic culture so that we can gape at them on telly. Think on.

Next Story:
A New Hope For Bleached Coral Reefs?