Youth shouldn’t be safe, it should be more exploratory, it should shock and offend, and demand a better world.

[dropcap style=”font-size:100px; color:#992211;”]F[/dropcap]eaturing the sugar and cider rush of PJ Harvey, Hole and the Violent Femmes, Feeding People reminds those of us still filtering through the detritus of yesteryear that, before Grunge re-marketed teens rebellion to shoes and soft drinks wallet-holders, there was a something powerful and visceral that threatened to hold a mirror up to the corporate wasteland.

The most striking thing about Feeding People is the interplay between Jessie Jones’s ballsy 50s-inflected voice and Louis Filliger’s exquisite guitar figures  – it’s catchy stuff. Each melody seems carved out of the familiar and draws from the genre-swamped vista of California’s love for reverb-riddled guitars and the permissive beats that create a complementary soundtrack to springtime fun.

The twelve tracks that make up Island Universe largely deal with the narrator talking about the observations of boredom and unspent energy. ‘Inside Voices’ could be an entreaty for ‘girls aloud’ teenage ‘sisters’ putting on dark make-up and singing deliberately out of tune, ripping stockings and drinking sherry.

Island Universe is a candy coloured affair that 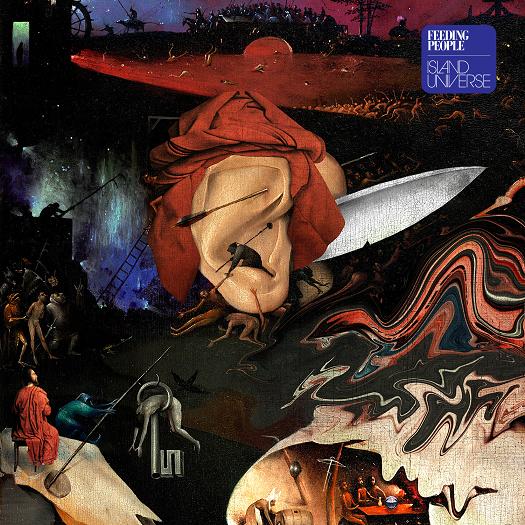 pushes, albeit in a primary coloured and professional way, the sexless fun of friendship without danger or depth. Feeding People could as easily be Deap Vally, or Drenge, or any number of girl- and ad-friendly bands that have cropped up recently, with the crucial difference that they are actually quite good.

Standout tracks on the album are the shouty opener ‘Mountain Song’, with it’s Hüsker Dü bassline pushing the song from one trashy line to another. It’s an instant classic that already has fringes and capes waving in the basement clubs of Camden.

‘Silent Violent’ has a great beat that shakes and drives and gives a real indication that while Island Universe is a great way to meet the band, we can put money on future great releases to come from the group. Perhaps the most interesting and least contrived track on the band is ‘Red Queen’, which has enough loose weirdness that we’re able to see a grotty band behind the polished videos. A band that, about two and half minutes in, actually breaks out of itself to aim at something beyond it’s own competence.

Is it important to remember that Jessie and Louis are still teenagers? Their music is as accomplished as anything you might hear from the legions of indie acts that pushes itself across the oceans to reach your inbox. Probably better. However, being presented with an impression of the wildness of youth rather than the wildness that actually exists chafes a bit.

Youth shouldn’t be safe, it should be more exploratory, it should shock and offend, and demand a better world.

Feeding People does what is says on the tin. It gives the pre-teen cool kids something to wean them off Beiber and into the next stage of their consumer development – namely an Island Universe of safely limited options with no danger, and hence no real excitement.

Worth a listen and a parent-friendly present for female godchildren (which could, ideally, lead them into listening to Babes in Toyland or L7)

Island Universe is out now on Innovative Leisure Records

Next Story:
Lady Shaving : The case for Pubes