Life In the Fast Lane (to A&E): Energy Drinks and Alcohol

The sugar, caffeine and… er, other far less identifiable ingredients of those popular energy drinks, may cause those who mix them with alcohol to have a heightened sense of sobriety.

As opposed to drinking straight coffee to sober up, and the resultant sense of being just as wasted as ever, but acutely aware of the fact.

People who mix highly caffeinated energy drinks with their alcoholic beverages may be at increased risk for injury, according to a review in the March issue of the Journal of Studies on Alcohol and Drugs.

Researchers at the University of Victoria’s Centre for Addictions Research of BC (CARBC), in Canada, searched for peer-reviewed journal articles on the topic of alcohol and energy drinks published from 1981 to 2016 and found 13 that fit their criteria and were able to be analyzed. Of those studies, 10 showed evidence of a link between the use of alcohol mixed with energy drinks (AmED) and an increased risk of injury compared to drinking alcohol only. The study classified injuries as unintentional (such as falls or motor vehicle accidents) and intentional (such as fights or other physical violence).

“The stimulant effects of caffeine mask the result that most people get when they drink,” says lead study author Audra Roemer, M.Sc. “Usually when you’re drinking alcohol, you get tired and you go home. Energy drinks mask that, so people may underestimate how intoxicated they are, end up staying out later, consume more alcohol, and engage in risky behavior and more hazardous drinking practices.”

AmED use is increasingly common across North America, the researchers say, either as premixed drinks sold in liquor stores or by combining the two beverages by hand (Red Bull and vodka is a common example).

Roemer says she became interested in the topic while reading research on the effects of alcohol and cocaine.”Cocaine is obviously a strong stimulant, and I was curious about lower level stimulants that are more socially acceptable,” she says. “I wondered if they were having a similar impact but to a lesser degree.” 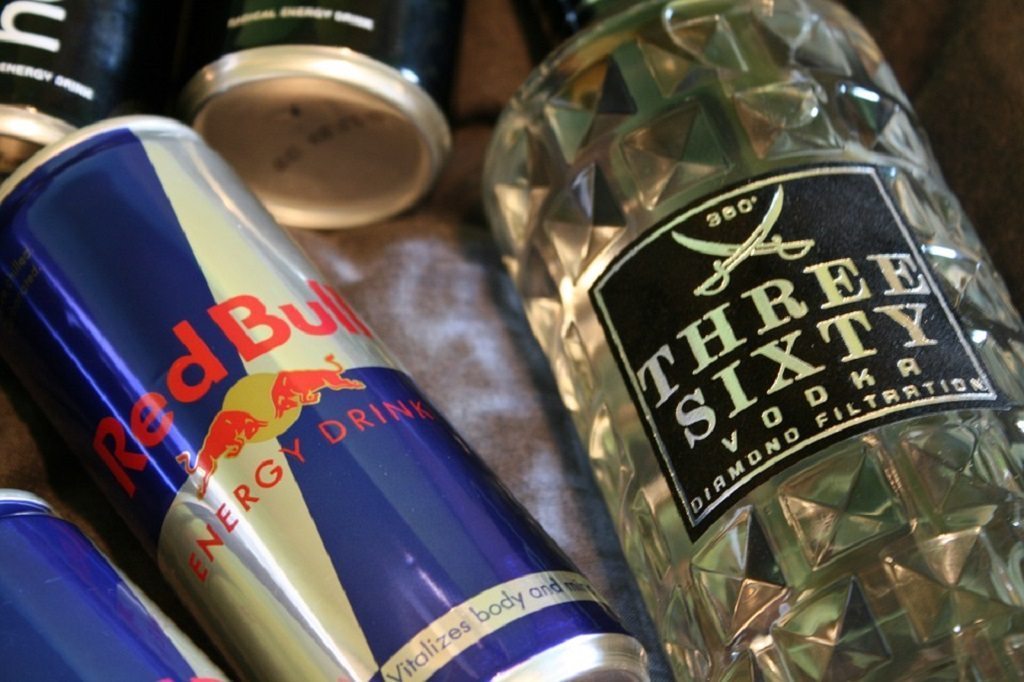 dencies play a role in injuries associated with AmED use.

“We know that these are risk factors for alcohol-related injuries, and some research has suggested that people who have these traits might prefer the awake-drunk state that you get from mixing alcohol and energy drinks,” Roemer says. “This could be a population that’s at even higher risk for injuries.”

The biggest surprise for Roemer and her colleagues was the lack of research in this area, as well as the wide variability in these studies that made it difficult to compare results. Consequently, they were not able to statistically determine the extent of the risk associated with AmED use.

“At the end of the day, we looked at all of the studies, but more research is need to confirm our findings,” says Roemer.

Roemer says the current study is the first of three planned articles that they hope to publish on the link between AmED and the risk of injury.

“We’re currently running a controlled emergency department study to look at the relationship a little more closely,” she says. “Hopefully that will bring more answers. The research we’ve done so far points to an increased risk of injuries with the use of AmED that could be a serious public health concern. Our hope is to conduct and facilitate future research in order to identify limitations and get a closer look at the topic to see what’s really going on.”

Source: Eurekalert/Journal of Studies on Alcohol and Drugs
Image: Pixabay/Noelsch

Next Story:
WOMADelaide Walkabout, Part One.