The Mystery of Roll: The Great Momentum (Edenbridge)

Lots of momentum, sure. But will the wheels fall off Edenbridge?

You have the European approach, that which borrows heavily from the NWOBHM and the likes of Teutonic giants like Accept, often focusing on melody, be it symphonic, operatic, neoclassically influenced or a mixture of these elements combined with the hard hitting metal approach. You also have the American style which is more metal based; it mirrors classic heavy metal, but tends to lean more to the progressive, speed and thrash side of things. One aspect of note though is that in both of these approaches (which can indeed be combined to give a more all round sound) is that underlying concept of fantasy and power.

From an entire album about The Lord Of The Rings (for which Blind Guardian of Germany were responsible) to numerous albums about being a warrior (Manowar) or arguably the ‘best history teachers ever’ (Sabaton), the themes of war, power, conquest, strength…  all the elements which make for an emotion triggering song… are present.

So where do Edenbridge sit on this rather vast and diverse spectrum?

The answer is clear when you give the album its first listen. Austria’s Edenbridge are a symphonic power metal band with a hell of a lot of progressive metal influences. Clean and powerful female lead vocals in combination with that clinical and precise heavy delivery are added to subtle modern prog metal undercurrents and synths which give a grandiose feel, bordering on operatic. It’s a very dynamic sound and approach. 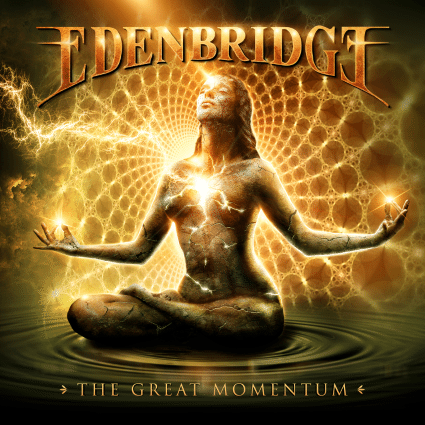 This is all impressive, but then, within this particular niche of power metal, it is important to remember that the fem-vox power metal genre is a rather familiar sounding one at times.

Bands like Nightwish, Within Temptation, Epica, Xandria and After Forever are all heavyweights in this style of music, and it seems more bands are prone to imitation than innovation. Despite this, Edenbridge have nine albums to their name, which shows some staying power at least. Can this talented Austrian outfit use this momentum and break through to the other side?

The answer is a resounding ‘maybe’.

Not ‘maybe’ as in: this could be something massive… more a ‘maybe’ in the indifference sense.

Musically this release is a solid entity. As you listen to the tracks, you can see how they are carefully constructed, the space allowed within each track is utilised to its upmost potential by the musicians (be it the thundering guitars or grandiose symphonic overtures). There is maximum instrument use going on here and the way the synths and other instruments combine to provide a backdrop of epic proportions for the vocals to dance their way across is impressive. If you were to simply look at this as a songwriting exercise, it would be a resounding success, but what it lacks overall is that one thing which seems to engage you. That lack makes it come across as more mechanical than organic, something which was carefully constructed rather than nurtured to life and allowed to take on its own identity.

From the dramatic “Shiantara” opening the release with huge string and synth ensembles; to the more accessible “The Moment Is Now” with its rhythmic hooks and Nightwish-like delivery; to the balladesque “Only A Whiff Of Life”, you get the standard sounds associated with this kind of power metal. Edenbridge do deliver it well, but the only real moment of spontaneity is a track around the middle of the album, “Return To Grace” which has an exotic, Middle Eastern-feel melody and a clear night and day approach: shifting and dancing between tradition and exploration.

In all, whilst this album may have momentum with it for fans of the band and those more inclined to this symphonic, female vocal niche of power metal. For me though, it stalls and stutters, showing that whilst it might be structurally sound and mechanically spot on, it lacks the juice needed to keep it going.

Previous Story:
Waiting (and waiting) for My Man: Marine Snails as Opioid Alternative

Next Story:
It’s Why They Call it Skunk: Cannabis and Pollution