Take a deep breath, close your eyes, cross your legs in a yogic fashion.

Chant whichever fuzzy new-age platitudes give you comfort and help you find your centre. Find your spiritual home. Keep it in mind, it’s about to be assailed.

Wherever your musical version of ‘home’ resides, be it in the reassuring thud of a bass drum kicking out 2/4 backbeat; the emotional solidity of the D, A and E chord trinity, or the euphoria of the long-delayed bass drop, Nostos refuses to take you there, winding you away into the chaotic woods each time the homely path is glimpsed.

Challenging listening, for sure. And isn’t a challenge nice from time to time? A paddle thorough turbulent waves, a higher climb than the quotidian, a flight through stormy skies – thus the appeal of Daniel Barbiero and Cristiano Bocci’s compositions for double bass and electronics. 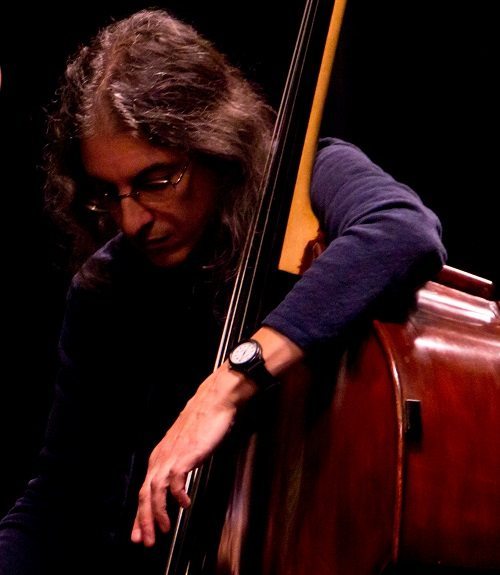 These are, on the face of it, double bass solos morphed, looped, sequenced and embellished with electronic elements, but such is the synthesis between Barbiero and Bocci, it is difficult to know exactly where the original solo ends and the subsequent electronic trickery begins.

Admittedly, on an initial sounding, the suspicion arises that Bocci and Barbiero are deliberately reaching for sonic cacophony out of their own sheer bloody-mindedness or purist pretention. On further examination though, that suspicion fades, and we are left with a collection of musical pieces which disturb, wrongfoot, disorient and occasionally attack the listener, whilst still being peppered with the ghost of expected song structures (the chord changes, beats and drops mentioned earlier) often enough to hold the attention.

Double bass and electronics, the combination suggests a dynamic with which seasoned listeners to new-classical/electronica experimentation will be familiar. Michael Price, Kiasmos, various Nordic praticioners of the wood-meets-motherboard mileu. The precedent is there, usually featuring some degree of electronic texture with the melodies coming from the acoustic instrument. Nostos doesn’t quite follow the set pattern, given that for one thing, the roles of each element take turns at being dominant and, for another, at times the double bass is used to such unexpected effect that it is the electronic element which sounds comforting, linear, human.

Barbiero plucks and pounds at both the strings and body of the double bass, and given the time he spends playing the instrument’s upper pitch limit, must have a left hand and forearm something akin to post-Spinach Popeye. Don’t try to arm-wrestle this guy. Elsewhere on the record he uses a bow, developing menacing soundwashes which bear no resemblance whatsoever to the more traditional flouncy stringwash we usually hear on electronica arrangements. Modern, discordant, challenging – the temptation to namedrop Mahler at this point is strong, but the truer reference is to Jimmy Page bowing his guitar during live renditions of ‘Dazed and Confused’.

As for the electronics, these move between supporting harmonies, topline melodies, occasional sequencing and looping of the double bass parts, textural polyrhythms and synth effects. Easy to say ‘synth effects’ and leave it at that, but in this case, it’s worth going into more detail. The process is one of passing the sound of the double bass through a series of synthesised effects, in the style of 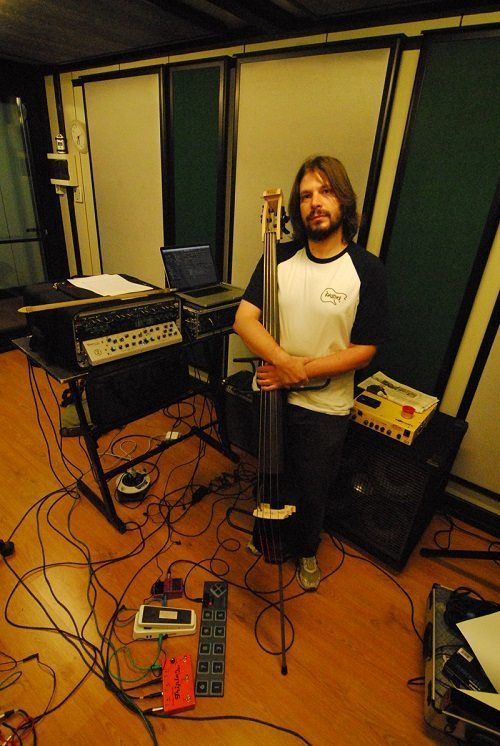 early Moog controllers, playing the degree of noise distortion, reverb and oscillation via a user-controlled fader. It’s electronics, but hands-on, and works a treat in this context. ‘Rienti Casuali’ and ‘Bordeaux su nero sopra il grigio’ are the most obvious tracks to demonstrate the process, with the former showing signs of brickwalled sonics which are either the result of square-wave processing on Bocci’s part (deliberately converting the soundwave into rough steps), or the limitations of the mp3 format on which the album was presented.

‘Contrabassi in Marcia’ stands out for specific mention, being a gathering and weaving marching melody built around a stacatto rhythm beaten out on the double-bass’s body, plucked strings and various variations of beats, bowings, tonal digressions and menacing motifs. It is a wildly hilarious piece of music which brings to mind some dread army of Grimms’ goblins advancing implacably through medieval forest.

Perhaps it is inevitable that the album’s title translates as ‘Home’ (from Greek). It is a recurrent pattern in the album that the further reaches of compositional disorientation are peppered and ghosted with refrains from the more familiar reaches of melody and harmony. Every time it goes right out into the wilds, it draws us back with a quick refrain of homliness. Easing to a close with the bittersweet linearity of ‘L’Ultimo Treno per Follonica’, the album completes the illusion of journey and return with poignancy, suggesting discontent with the familiarity of the known.

Strange things there may be, out there, but it sure beats boredom.

Nostos is available on September 15th from Acustronica.com