Henri Matisse: The Cut-Outs is a must-see for so many different reasons. The Tate director, Nicholas Serota, claims it will be “the most evocative and compelling show that London has ever seen”.

[dropcap style=”font-size:100px; color:#992211;”]T[/dropcap]his exhibition, originally proposed for 2009 and so long awaited by those in London and far beyond, is more beautiful and uplifting than could be imagined.

It has been such a momentous project that the Tate joined forces with MoMA, where the show will tour from 14 October to 9 February 2015. Many cut-outs have been lent from France such as from the Matisse Museum in Nice and the Pompidou Centre in Paris. The curators described the press view alone as a “monumental day”.

Henri Matisse: The Cut-Outs is a must-see for so many different reasons. The Tate director, Nicholas Serota, claims it will be “the most evocative and compelling show that London has ever seen”. A main attraction is that this is the first time many of the works, of which there are about 130, have been seen together and displayed in the UK. 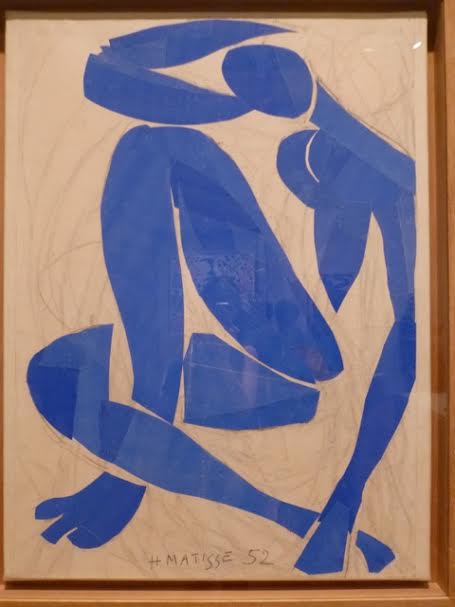 Just think of the four The Blue Nudes, 1952. Their forms seductively follow you round the room, enchantingly entwining electric blue hues with negative spaces in a repetitive, meditative dance before our eyes. The life and vigour in this room, and the exhibition as a whole, never fails to surprise. This is especially considering that these cut-outs were created in the last years of Matisse’s life, from 1937 to 1954.

All the walls of the artist’s studio were filled with his cut-outs, he literally lived among them. Thus, the studio was not only a place of artistic production, or where an old man was battling out his final illness, but a work of art in itself.

These different identities, and central importance, of the studio is something the exhibition constantly returns to in a way that emphasises Matisse’s final, prolific achievement: He invented a unique medium and a new approach to both art and life.

The exhibition is largely chronological. The works become significantly larger in scale, impressively expansive and increasingly joyful. It is clear that Matisse relished the challenge to experiment, and used the changes in his own physical strength as a way to explore new forms of art. He could have become nostalgic and frustrated after his illnesses from duodenal cancer and operations that left him physically weak and unable to paint, yet there is a sense that he was more alive than ever.

Art is always about freedom

One of his most famous phrases is significantly apt for both the Tate’s exhibition and Matisse’s final period when he says, “An artist should never be a prisoner of himself, a prisoner of style …. Art is always about freedom”. Matisse knew he was onto something and constantly looked to a new freedom and future of art, stating, “by creating these coloured paper cut-outs, it seems to me that I am happily anticipating things to come”.

In Room 3 the show really intensifies the delight and surprise, throwing up the vivid, bold colours Matisse began harnessing to almost abstract effects. This is the room of music, movement, resonating colour and experimentation between the relationship between both image and text, and colour and words. 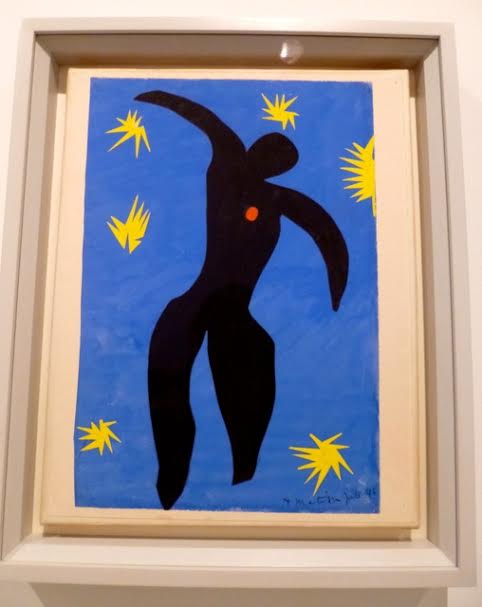 The book Jazz, from the summer of 1943, takes up the majority of this room. It is exciting to see the combination of 20 original cut-out maquettes (including the striking ‘The Fall of Icarus’) and a complete copy of the book. This shows how different the colours and textures of the two media are; there is something almost sculptural about the original cut-outs compared to the finished, printed book pages.

Jazz contains Matisse’s musings on his life and practice, and details of journeys (including his trip to Tahiti). Matisse was always returning to his memories, and coming back to his previous work and themes.

After Jazz and several examples of book jacket designs, the cut-outs clearly become works of art in their own right, rather than being for purely compositional purposes (Matisse would work out painting compositions with cut-outs).

The 1950s particularly sees this break: Matisse’s cut-outs become akin to painting, using the same devices, such as having a fore-, middle- and back-ground. One of his famous phrases, “cutting into colour”, conveys this conflation of painting, line and colour that came to characterise his work. 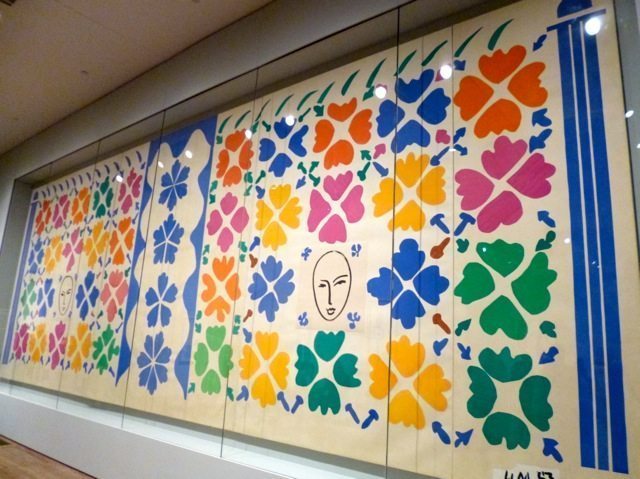 The gigantic scale of the later cut-outs (the largest being ‘The Parakeet and the Mermaid’, 1952) also indicates that they became stand-alone artworks. Matisse’s glamorous female assistants painted such large-scale sheets of card (refreshingly, some of these assistants make several appearances throughout the exhibition in the two videos on display), although Matisse always did the cutting himself. Both his pride, and love of experimentation, in his work is further noticeable through the way he tried out different signatures. He constantly reinvented himself.

The Blue Nudes are undoubtedly a striking series and certainly exemplify the technique of ‘cutting into colour’ because they are mostly made up of whole blocks of single shades. However, the first in the room has been composed from several blue hues.

This is one of the delights of the exhibition: being able to see the cut-outs up close and to realise how much more detailed they are than any reproduction could ever convey. Viewing the work close-hand also enables you to spot pinholes and marks made when Matisse was arranging his work on the studio walls. We get both a greater sense of the finished pieces and insight into the radical working methods of this elderly artist. 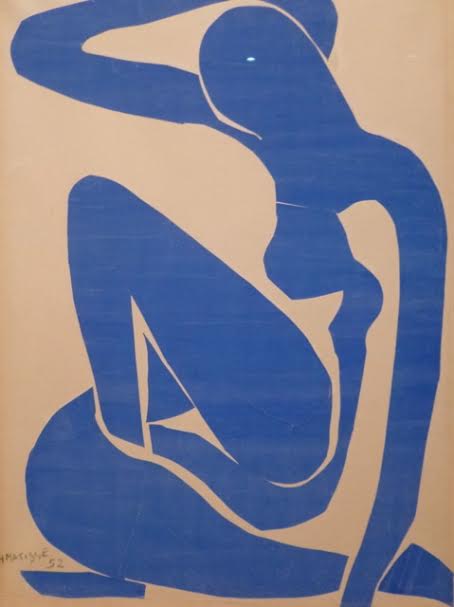 The Blue Nudes are displayed alongside some of Matisse’s earlier sculptures of reclining nudes from the late 1920s and early 1930s. This juxtaposition not only allows us to see the change in Matisse’s style, but also illustrates his increased economy in crafting the female form. Indeed, overall, the solid colour of the The Blue Nudes conveys the artist’s heightened confidence to conjure form and mass.

Chapel of the Rosary

One of the largest rooms is dedicated to cut-outs, drawings and designs relating to the Chapel of the Rosary at Vence in France, for which Matisse was commissioned to make art in 1947. Included are designs for the Priests’ robes, which are still worn today, and stained glass panels.

This is one of the most intriguing rooms, not only in terms of the content and the sheer scale of the pieces, but also because of the methods of display. Different stages of the design processes have been gathered together and juxtaposed, each on an overwhelmingly monumental scale. Matisse’s excitement for the project definitely comes through; this was the first time he had designed for a large environment, a challenge he had craved for many years.

Additionally, the relationship of the works to Matisse’s studio is intriguingly brought out in the Chapel exhibition room. The designs are placed over the walls similar to the way Matisse displayed his works-in-progress in his studio, which was the same size as the Chapel. 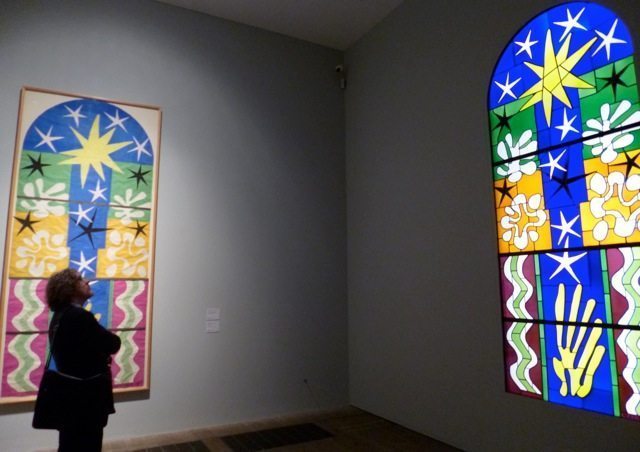 This connection with the studio is felt even more vividly when contemplating the slightly out of place outline of a doorframe in the drawing on ‘The Virgin and Child’, c.1950. As Matisse traced and transferred his drawings to the ceramic tiles of the Chapel, the outline of his studio door was also included!

The Tate’s exhibition demonstrates that Matisse not only validated his cutting technique and collage as an art form through its kinship to painting, but also that he broke free from the constraints of painting, and as Nicholas Serota states, “opened up space in a different way”. These radical techniques and illuminating effects will always delight, surprise and energise.

This final, great work of the artist could not be displayed with more care or thought as they are at Tate Modern’s Henri Matisse: The Cut-Outs.