What’s that? They’re GREEN? Green? Bloody sodding GREEN? The one colour that has absolutely not one smidgen of use to a chlorophyll-filled plant? And the worst hue of rave lighting there could possibly be, to boot?

Researchers at the University of Illinois at Urbana Champaign have developed a new method for making brighter and more efficient green light-emitting diodes (LEDs). Using an industry-standard semiconductor growth technique, they have created gallium nitride (GaN) cubic crystals grown on a silicon substrate that are capable of producing powerful green light for advanced solid-state lighting.

“This work is very revolutionary as it paves the way for novel green wavelength emitters that can target advanced solid-state lighting on a scalable CMOS-silicon platform by exploiting the new material, cubic gallium nitride,” said Can Bayram, an assistant professor of electrical and computer engineering at Illinois who first began investigating this material while at IBM T.J. Watson Research Center several years ago.

“The union of solid-state lighting with sensing (e.g. detection) and networking (e.g. communication) to enable smart (i.e. responsive and adaptive) visible lighting, is further poised to revolutionize how we utilize light. And CMOS-compatible LEDs can facilitate fast, efficient, low-power, and multi-functional technology solutions with less of a footprint and at an ever more affordable device price point for these applications.”

Typically, GaN forms in one of two crystal structures: hexagonal or cubic. Hexagonal GaN is thermodynamically stable and is by far the more conventional form of the semiconductor. However, hexagonal GaN is prone to a phenomenon known as polarization, where an internal electric field separates the negatively charged electrons and positively charged holes, preventing them from combining, which, in turn, diminishes the light output efficiency.

Until now, the only way researchers were able to make cubic GaN was to use molecular beam epitaxy, a very expensive and slow crystal growth method when compared to the widely used metal-organic chemical vapor deposition (MOCVD) method that Bayram used.

Bayram and his graduate student Richard Liu made the cubic GaN by using lithography and isotropic etching to create a U-shaped groove on Si (100). This non-conducting layer essentially served as a boundary that shapes the hexagonal material into cubic form.

“Our cubic GaN does not have an internal electric field that separates the charge carriers–the holes and electrons,” explained Liu. “So, they can overlap and when that happens, the electrons and holes combine faster to produce light.” 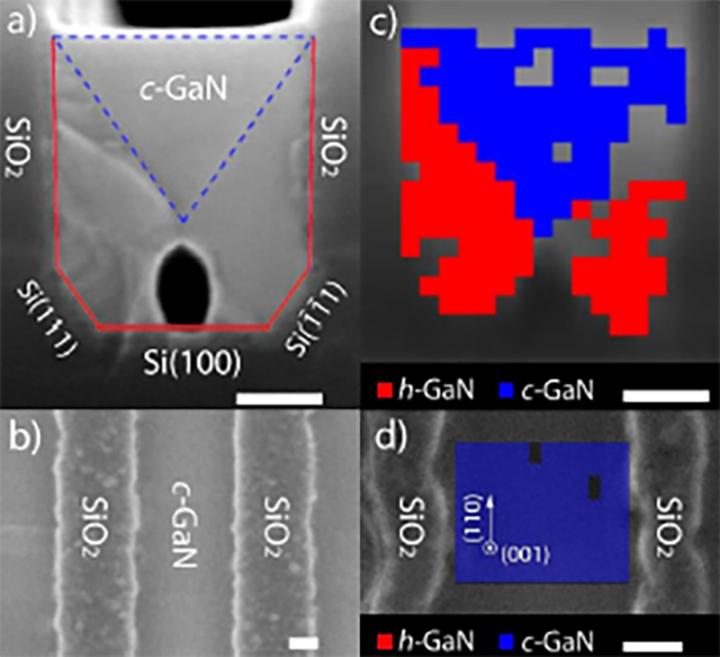 Ultimately, Bayram and Liu believe their cubic GaN method may lead to LEDs free from the “droop” phenomenon that has plagued the LED industry for years. For green, blue, or ultra-violet LEDs, their light-emission efficiency declines as more current is injected, which is characterized as “droop.”

“Our work suggests polarization plays an important role in the droop, pushing the electrons and holes away from each other, particularly under low-injection current densities,” said Liu, who was the first author of the paper, “”Maximizing Cubic Phase Gallium Nitride Surface Coverage on Nano-patterned Silicon (100)”, appearing Applied Physics Letters.

Having better performing green LEDs will open up new avenues for LEDs in general solid-state lighting. For example, these LEDs will provide energy savings by generating white light through a color mixing approach. Other advanced applications include ultra-parallel LED connectivity through phosphor-free green LEDs, underwater communications, and biotechnology such as optogenetics and migraine treatment.

Enhanced green LEDs aren’t the only application for Bayram’s cubic GaN, which could someday replace silicon to make power electronic devices found in laptop power adapters and electronic substations, and it could replace mercury lamps to make ultra-violet LEDs that disinfect water.