For the Canadian master of body horror, novel-writing is a cut too far

[dropcap style=”font-size:100px; color:#992211;”]T[/dropcap]he title of the novel I am faintly examining is Consumed and it is written by David Cronenberg.

Cronenberg is a remarkable film maker and, on the evidence of his first literary venture, a piss-poor novelist. This doesn’t stop high profile collaborators such as Steven King, J.J. Abrams, Bruce Wagner and Viggo Mortensen queuing up to spray aromatic praise on the back cover of the book.

They should get out more.

Or stay in and read the complete works of William Gibson. I suspect that Cronenberg has certainly spent a few hours poring over the artful masterpieces of his fellow Canadian, in particular the low key science-without-fiction Blue Ant trilogy of the last decade. Throughout Consumed Cronenberg strains to portray a Gibsonesque twilight money-driven world where chancers and obsessives morph into hard wired instruments manipulated by invisible hands. The kind of dizzy so-hip-it-hurts-the-head stuff that Gibson handles with ease and aplomb, but Cronenberg simply fails to grasp. Gibson may not be ‘of the street’ but he certainly knows where it is. 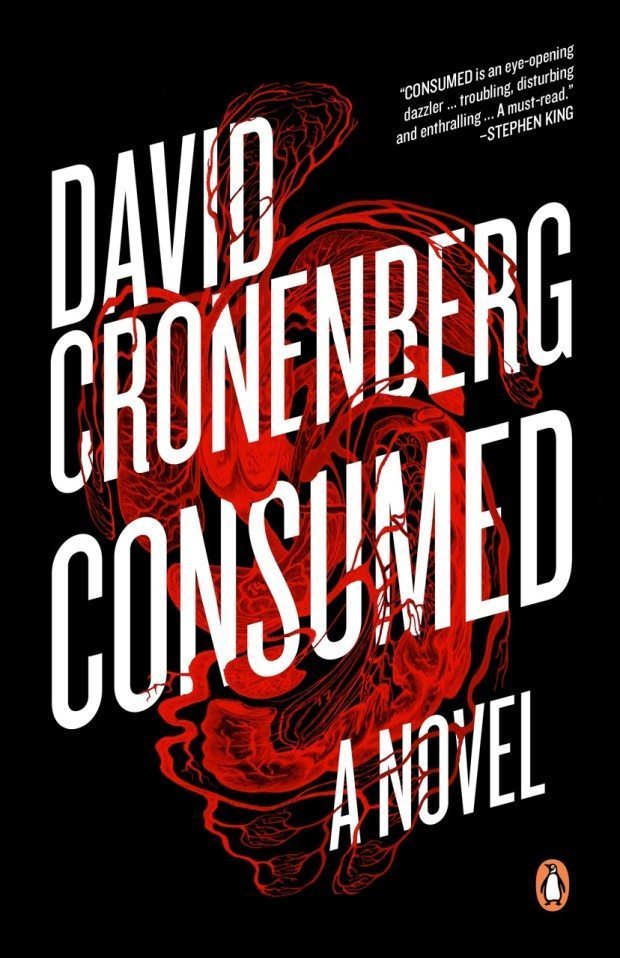 In the past DC has acknowledged his affinity to the Hoodoo language of William Burroughs, although his disappointing film of the cut-up novel Naked Lunch shows no trace of such an affinity. At one point he even joked in passing that when Burroughs passed on he could write his next book for him.

If Consumed ever does reach the Interzone it will be denied entry for fraudulent behaviour.
It’s not like Cronenberg doesn’t understand ‘clunky’, after all he used it to great effect in his underrated movie Existenz, which perfectly mimics the crude but absorbing narratives of the early video game experience. He also understands refinement and the delicate cruelty of (scientific) romance as displayed in his obstetric masterpiece Dead Ringers (Jeremy Irons playing against himself must have been a dream come true for the transparently vain British actor).

There is no refinement in Consumed – just pure clunk. I saw the book shimmering in a tempting way on bookstore shelves back in 2014. When I saw it last week, remaindered in hardback for three English pounds, I couldn’t resist. I could have had a cold brew coffee for the same price, and added a spoonful of xylitol sweetener to improve the condition of my teeth and gums. We all make choices we regret from time to time

I certainly don’t regret queuing for late night screenings of his early squirmfest Shivers or experiencing the futuristic head popping of Scanners. Videodrome was the definitive techno wank flick of the eighties while A History of Violence and Eastern Promises gave Viggo Mortensen deft non genre based material in which he both fully exercised his considerable acting muscles and showed his fine toned arse to the camera.

Cronenberg is a rare filmic talent who can straddle both sides of the genre line. I almost gave up on his recent picture Maps of The Stars which was written by Bruce Wagner. After half an hour of trite Hollywood characters and a yawn-worthy plot I was ready to tune out. But a small voice in the back of my head shouted ‘This is a DAVID CRONENBERG film’ so I persisted… and was rewarded by a film that turned itself, and the viewer, inside out discovering a new and unexpected strain of sympathy as it did so.

No such delayed reward in Consumed. It stinks from first page to last.

Steven King is a great booster of other people’s work so it is never a surprise to see his glowing words on other writers’ dust jackets. In this case King has an extremely good reason for supporting his one-time collaborator. For such a prolific and successful writer King has been ill served by most adaptations of his work. Outside of Kubrick’s The Shining, which King himself despises, I can hardly think of a decent picture made from his horror fiction – with the exception of Cronenberg’s The Dead Zone.

Christopher Walken and Martin Sheen are perfectly cast in this taut occult thriller, in which a man born to be a US president harbours the potential to unleash a future atomic crime. Walken drifts through the movie like a pale ghost searching for salvation while wearing his unwanted psychic ‘gift’ like a cold scarf. If you have never seen The Dead Zone then you should make it your next film destination. If you have never read Consumed, well, lucky you.

It is perfectly acceptable for the bold traveller to fail in film, as Cronenberg has done on a number of occasions. Even a director of substance must contend with rising costs, film studios, distributers, weather conditions, camera fatigue and pointless questions from actors with diminished brain cells.

But a book is a quite another matter. No finance or assistance is required. It is simply a matter of the hand against the page and, unfortunately, as in this case, the page usually wins.

On a musical note I am indebted to David Cronenberg for introducing me to the work of composer Howard Shore who, prior to his debilitating stint in Hobbit world, was the finest composer on the Hollywood beat.

Next Story:
No Rain, No Rivers Flow? Ethiopia to Benefit from Climate Change