Acoustic Researchers Rid Golf Courses of Clanging Bores (well, some of them)

Surely not. Think of it as a opportunity for valour. Empires were not won by wets who balked at a resounding clang! Did the brave fusiliers of Rorke’s Drift cower at the clang of Zulu speartip on shield? Not a bit of it, sir. Did Lawrence of Arabia quail at the clang of Ottoman steel, or Gordon of Khartoum flinch at the clang of lanyard clips upon fuzzywuzzy carbines? Emphatically not.

Swing proudly, oh jellyfaced hamcarved golfclub bore, for you hold in your hands clanging alloy proud as the cannons of Crimea.

In 2007, a new type of golf club hit the market. The distribution of mass in the club head made it less likely to twist, making an off-center hit less likely to send the ball veering off course. It did have one drawback: a loud noise when it struck the ball, piercing through the tranquility of a golf course. The club never grew popular among players, with many saying they disliked the noise.

“Some players compared the sound to a cookie tray hitting the top of a car,” said Daniel Russell, a professor of acoustics at The Pennsylvania State University. “It was such a different — some say annoyingly loud — sound, it raised eyebrows.”

Russell and his graduate student Peter Kerrian set out to find the cause of the offensive clang. They had analyzed a variety of clubs from recent years and the “noisy club” stood out as a particularly interesting test case.

The researchers tracked the clanging sound to vibrations in the bottom of the club head, called the sole, that were strongest in the most sensitive range of human hearing.

Russell has long studied the acoustics of sports equipment, including baseball bats, tennis rackets and hockey sticks. He says sound is one of the major considerations for players in selecting equipment. “They want to hear the sound and be able to get a sense of the quality of the hit,” he said.

In the case of the new driver, the sound not only didn’t match expectations, it annoyed people.

“The sound had peaks in the 2-3 kilohertz range. The human ear is very sensitive to this range,” Kerrian said. He compared the sound to the tin-can ping of an aluminum baseball bat, another grating sound for sports aficionados.

To get at the source of the golf club’s clang, the researchers tested it in their lab and measured its vibrations. They also asked members of the Penn State golf team to hit some balls with the club, and recorded the sounds.

The scientists matched the vibrational modes of the club to the recorded sounds. Th 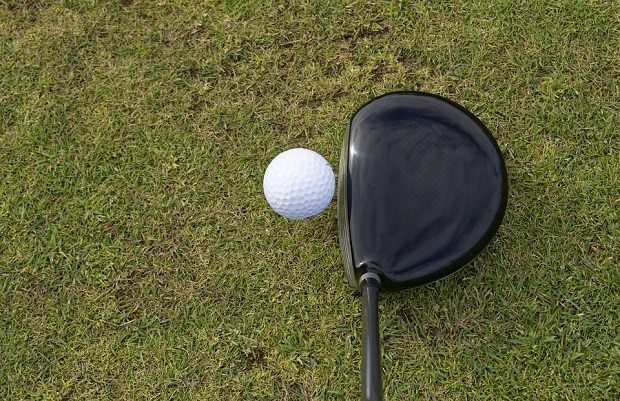 ey found that the annoyingly loud component could be matched to a natural vibration of the bottom part of the club head. The large size of the club head compared to traditional drivers meant it radiated the 2-3 kilohertz range very effectively, Russell said.

The researchers say the club could likely be redesigned to muffle the sound without sacrificing its forgiveness of off-center hits if acoustical analysis plays a role in the design. This might be done by integrating different materials that absorb the peak frequencies. They are starting collaborations with golf club manufacturers and say acoustical analysis could serve an important role in future equipment development.

“Some of the newest clubs, which are made of lightweight composite materials, have the opposite problem in that they’re almost too quiet,” Russell said.

The tools of acoustical science could help designers find the “sweet spot” that merges top-notch performance with solid sound, and no annoying, cookie-sheet clangs.