An interview with sculptor Emily Young 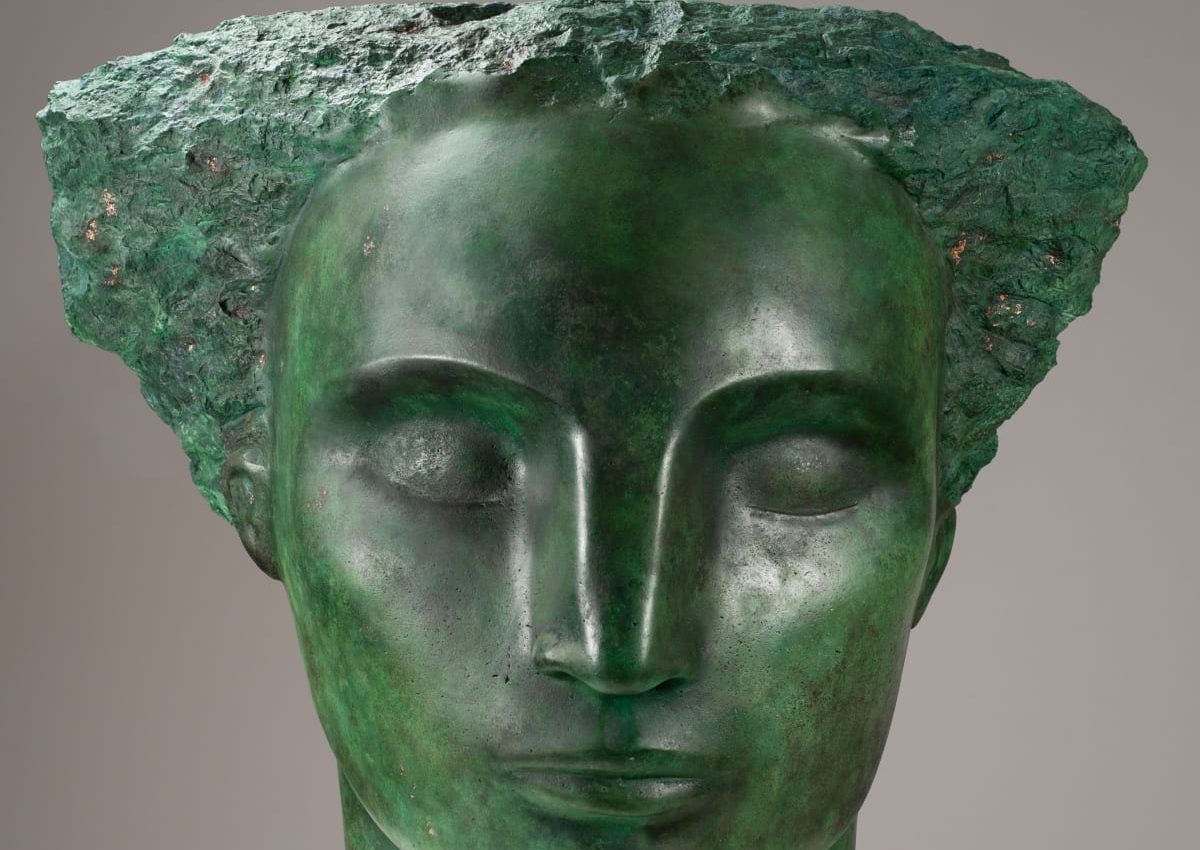 Being labelled ‘Britain’s greatest living sculptor’ comes with a level of expectation that would overshadow most artists’ output. However, in the case of Emily Young, whose work revels in the power of natural materials and the sort of anthropocentric geometry that gave classical sculpture its gravitas, this hyperbolic label given by the Financial Times, while controversial, seems plausible from the perspective of classicism and narrative. Her works, often large in scale, while immediately familiar contain the feather of truth which give us the curious itch important for art to live.

Her continuing series of heads, show classical styled heads melding into the textured faces of stone, and play ideas of erosion, time, ruins and creation. We’re used to seeing classical works eroded by time but here it’s as though the material itself has ‘eroded’ through creation to give us the human image. Is this a sophisticated emphasis of pareidolia where we’re drawn into a parallel discussion of the creative act recognising the familiar in nature and as a result positioning ourselves closer to the natural source of our existence?

Educated at Chelsea School of Art and Saint Martin’s School of Art in the 60s Young’s life and career follow a storied trajectory through travel and popular music, heady experiences which we might wonder have driven her away from contemporaneous social references towards things with a more timeless frame. Represented by Robert Bowman gallery, her recent showing at TEFAF 2022 was indicative of her position as both a living sculptor and someone already collected in the longer tail circles of Fine Art. Answering our questions, Young allowed Trebuchet a view into her current creative process and how she enters into a discussion with materials to find human harmony and natural expression.

What has inspired your work for TEFAF Maastricht 2022?

Throughout my working life, my living hands displace the vision of my shroud.

What is the role of the story in your work?

I believe we seek a choral voice, a communal voice: the echo of the voice of History, a global compassion.

Do you see your work as realistic?

Multiple realities sing songs to our hearts and become the vigil stones in the gardens of suffering and gratitude.

Do you create the same world in every work or is each work its own reality?

“The mind, that ocean where each kind
Does straight its own resemblance find”

What makes it special?

The notion of the sacred in ancient times could be described as a way of being connected with the great powers of creation and destruction and the questions raised in the human heart about the unknown, the unknowable. It was an active way of feeling and manifesting our acknowledgement of our vulnerability in the face of fate, nature’s powers over us.

In these days, with Covid and planet wide destruction threatening everyone of us, and I include all other life forms in that ‘us’, the sense of the sacred must lose something of its ancient meaning and realign itself to some things that we do understand, for instance our dependence on a healthy planet, both biome and climate. The sense of awe and respect in the face of real-time threats, but also the blessings, allow the possibility of turning in full consciousness away from incompetence and towards the notion of service to greater good.

To what extent does your work operate on the ‘canvas’ versus in the viewers?

It is a spirit that I’m looking for, feeling for, a feeling not identifiable till felt and seen. Each piece has it, or will have it, or will allow me to find it, and it’s not known or seen till it has created itself, a movement, a fertile marriage between the two entities, human and stone – the procedure of finding the way to the end of the process is to follow the eye hand flow, with a million movements of the hand allied with a million critical decisions, allowing or discarding the previous moves. It is not an intention that has been imagined visually, drawn and designed previously and then acted on, acted out, but more an agreement in principle to keep going till the marriage, the contract is fulfilled to the satisfaction of/by a critical eye. Each piece of stone brings its own non-negotiable conditions, of its geology, its history, its personal story manifest in matter and in time. I witness the passing of thoughts before my attentive consciousness and follow behind it, often marvelling at what the dance is revealing. The inner critic or co-contender works alongside the requirements of the moment. Who knows what the parameters of each participant is, my consciousness, the stone’s material reality, the rapid communication between the two, or is it the three? My consciousness requires a witness, both my own self-awareness, and the stone’s receptivity or refusal to engage. The process is universal and lightning fast. This process is available to all.

What is your relationship to the attractiveness of your work?

The stone embodies potential. I am given the freedom of the stone, who has no consciousness to be afraid within, and I bring the human, who is all fear of danger and enthusiasm for delight, the dangerous dreaming seesaw of consciousness in the space-time continuum: within this is a gift of creation, godlike, freedom to feel the beauty, to fulfil and place coherently the pain of being. Embodied consciousness.

What is the key point of difference between what we might call the ‘real’ world and what you’ve created?

If I think of myself as a servant of the planet, and the planet as a temple and all my human kin a great family of temple devotees, who with every breath manifest their devotion to, connection with, and dependence on this temple, I wonder what that thought would look like if I characterised it, personified it, in human form. There is no separation, only connection.

Topically, what does that difference reveal in society, philosophy, and art? And is that a concern of yours?

We have projected our preoccupations onto the heavens since the beginning of human time: to imagine and to locate/define the source of power has been our most consistent and ambitious activity. Again, there is no separation. Only connection.

What separates the world you’ve created from fantasy?

William Empson in Some Versions of Pastoral, said: ‘probably a half-magical idea is the quickest way to the truth.’

One of the games I used to play as I was making the stone pieces was that they would be found in some moment of the future and be indecipherable to the archeologists of the future. I was creating a fictional sort of Borghesian archeology. The pieces were from which culture exactly? And what period of humanities timeline? The stone itself might have been imported from who knows where, quarried who knows where? And unless you happened to be a geologist with knowledge of world topology, the mystery might be beguiling. Chinese marble, Mexican quartzite, European limestone, and then also, multiple choices of cultures to choose from, Olmec, Greek, South Asian Buddhas, a kind of guessing game conjured from a newly available global repository of forms and multiply interpretable content. The flow between all these possibilities is what counts.

My work has for years now been about how to find a way to release creativity, originally my own personal path, but more recently as a way to release our human creativity in the service of resolving a profound loss of connectedness.

Historically we told possible stories to explain the unknown. Now, as we know more about the material world, the physics, the sub-atomic, the astro-physics of the cosmos and world we live in, we still face each day our failure to coordinate our selves personally, with each other as fellow humans and our fellow life forms on earth. We look forward as though the past has no meaning, we turn our backs on the history we are born of, and hurl ourselves into lives of acquisition and distraction, leaving more destruction in our wake. It has become desperate. All are tormented, the impoverished, and the morally bankrupt. Loss is all around.

And hope. The necessary sense of connectedness with the manifest and beautiful reality that is the natural world – our home planet – requires constant attention and recreation. It is a living power.

How do you ask the viewer to consider the world you create? Do you need it to be immediate?

To find and hear these sleeping stones, and hear their song of stillness is something that simply requires a moment of thoughtfulness.

Do you want the viewer to lose themselves in your work? Or find themselves? And what does that difference mean to you?

We live in a connected collective of lucent transparencies. No separation.

How do the formal aspects of art making construct the reality of the world you create?

The human mind, constrained by flavours of desire and fear, rests on the material river which flows backwards to the formation of constructed matter, through biology, through geology: it can reach further back in thought measurements of space time to our origins, our universe’s single spot of created matter. The creator’s point of power. Human minds can think of this, but most don’t. We think of gods and sex and money: if we did think of our material origins, we would bow down and kiss the ground we walk on: we would touch the angels shoulder, the angels wing, more often, and we would tie our thoughts to the dark heavens, splintered by galaxies: stone manifestly holds these thoughts and holds the weight lightly.

Next Story:
The Vision of Enter Art 2022 by Kirsten Eggers