[dropcap style=”font-size:100px; color:#992211;”]S[/dropcap]araswati. One of the most massive things ever observed. And a nice easy name to remember too.

Which will be handy for what will be its primary use in the coming years: as the critical coda to earnest nerd jokes beginning ‘Yo mama so fat….’

A team of astronomers from the Inter University Centre for Astronomy & Astrophysics (IUCAA) and Indian Institute of Science Education and Research (IISER), both in Pune, India, and members of two other Indian universities, have identified a previously unknown, extremely large supercluster of galaxies located in the direction of constellation Pisces. This is one of the largest known structures in the nearby universe and is at a distance of 4,000 million (400 crore) light-years away from us.

This novel discovery is being published in the latest issue of the Astrophysical Journal, the premier research journal of the American Astronomical Society.

Large-scale structures in the universe are found to be hierarchically assembled, with galaxies, together with associated gas and dark matter, being clumped in clusters, which are organized with other clusters, smaller groups, filaments, sheets, and large empty regions (“voids”) in a pattern called the “cosmic web,” which spans the observable universe.

Superclusters are the largest coherent structures in the cosmic web. A supercluster is a chain of galaxies and galaxy clusters, bound by gravity, often stretching to several hundred times the size of clusters of galaxies, consisting of tens of thousands of galaxies. This newly discovered ‘Saraswati’ supercluster, for instance, extends over a scale of 600 million light-years and may contain the mass equivalent of over 20 million billion Suns.

When astronomers look far away, they see the universe from long ago, since light takes a while to reach us. The Saraswati supercluster is observed as it was when the universe was 10 billion years old.

The long-popular “cold dark matter” model of the evolution of the universe predicts that small structures like galaxies form first, which congregate into larger structures. Most forms of this model do not predict the existence of large structures such as the “Saraswati” supercluster within the current age of the universe. The discovery of these extremely large structures thus forces astronomers into re-thinking the popular theories of how the universe got its current form, starting from a more-or-less uniform distribution of energy after the Big Bang. In recent years, the discovery of the present-day universe being dominated by “dark energy,” which behaves very differently from gravitation, might play a role in the formation of these structures.

It is believed that galaxies are formed mostly on the filaments and sheets that are part of the cosmic web, and many of the galaxies travel along these filaments, ending up in the rich clusters, where the crowded environment switches off their star formation and aids in the transformation of galaxies to disky blue spiral galaxies to red elliptical galaxies. Since there is an extensive variation of environment within a supercluster, galaxies travel through these varied environments during their “lifetime.” To understand their formation and evolution, one needs to identify these superclusters and closely study the effect of their environment on the galaxies. This is a very new research area — with the aid of observations of new observational facilities, astronomers are now beginning to understand galaxy evolution. This discovery will greatly enhance this field of research. 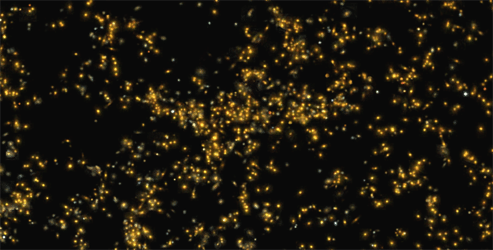 “Saraswati” (or “Sarasvati”), a word that has proto-Indo-European roots, is a name found in ancient Indian texts to refer to the major river around which the people of the ancient Indian civilization lived. It is also the name of the celestial goddess who is the keeper of the celestial rivers. In modern India, Saraswati is worshipped as the goddess of knowledge, music, art, wisdom and nature — the muse of all creativity.

Our own galaxy is part of a supercluster called the Laniakea supercluster, announced in 2014 by Brent Tully at the University of Hawaii and collaborators.

Interestingly, Somak Raychaudhury, currently director of IUCAA, Pune, who is a co-author of this paper, also discovered the first massive supercluster of galaxies on this scale (the “Shapley concentration”), during his PhD research at the University of Cambridge. In his paper, published in the journal ‘Nature’ in 1989, he had named the supercluster after the American astronomer Harlow Shapley, in recognition of his pioneering survey of galaxies, from the southern hemisphere, in which this massive superstructure was first imaged, way back in 1932.

Joydeep Bagchi from IUCAA, the lead author of the paper, and co-author Shishir Sankhyayan (PhD scholar at IISER, Pune) said, ‘‘We were very surprised to spot this giant wall-like supercluster of galaxies, visible in a large spectroscopic survey of distant galaxies, known as the Sloan Digital Sky Survey. This supercluster is clearly embedded in a large network of cosmic filaments traced by clusters and large voids. Previously only a few comparatively large superclusters have been reported, for example the ‘Shapley concentration’ or the ‘Sloan Great Wall’ in the nearby universe, while the ‘Saraswati’ supercluster is a far more distant one. Our work will help to shed light on the perplexing question: how such extreme large scale, prominent matter-density enhancements had formed billions of years in the past when the mysterious dark energy had just started to dominate structure formation.’’