French illustrator and artist Julien Pacaud makes a study of control, and letting it go

[dropcap style=”font-size:100px; color:#992211;”]W[/dropcap]hen I first discovered the work of self taught French artist and illustrator Julien Pacaud, I immediately thought of Richard Hamilton’s renowned collage “Just What Is it That Makes Today’s Homes So Different, So Appealing?” (1956).

Similar to the way in which Hamilton was influenced by post-war commercial imagery as a means to provide social commentary, Pacaud “is heavily influenced by the enormous back catalogue of images from film and television,” as stated by Catherine Gaffney on It’s Nice That. Unlike Hamilton, however, Pacaud’s use of imagery conveys a very different message: a message which prompted me to reflect upon my past and a recent change in my perspective.

Of the many collage-like compositions that Pacaud has created, “The Operator” is one that stands out among his vast portfolio of work. It is a prime example of his fascination with geometric shapes and his interest “in the confrontation between the randomness of nature and man-made architecture,” as revealed in an interview he did with Juxtapoz. 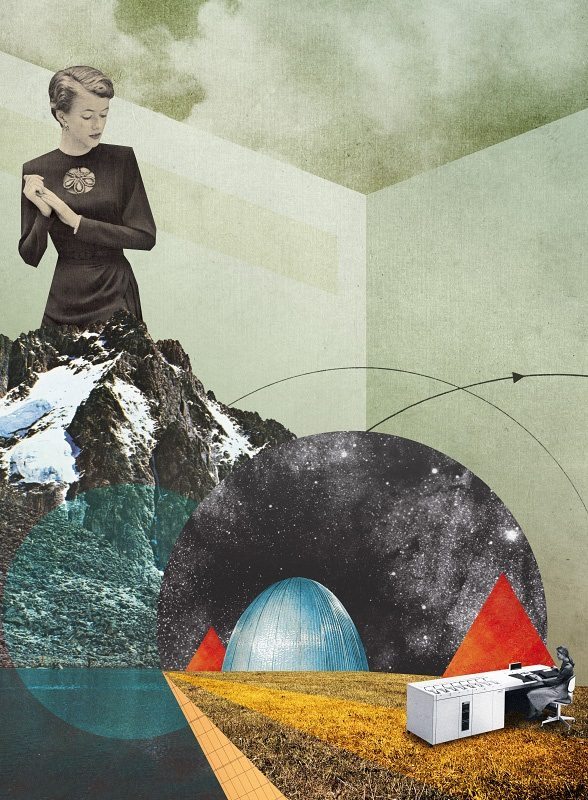 However, it wasn’t until I heard a podcast of This American Life, entitled “Show Me the Way,” in which an excerpt from science fiction writer Piers Anthony’s personal notes was read, that I recognized the depth of Pacaud’s work.

One thing you who had secure or happy childhoods should understand about those of us who did not, we who control our feelings, who avoid conflicts at all costs or seem to seek them, who are hypersensitive, self-critical, compulsive, workaholic, and above all survivors, we’re not that way from perversity. And we cannot just relax and let it go. We’ve learned to cope in ways you never had to.

While I was undergoing chemotherapy, I felt completely out of control. And for good reason. There were many times when there was nothing I could do but sit with my feelings and endure because I just felt too terrible to do anything else. Yes, it was an unpleasant experience. And I wouldn’t wish it upon anyone. But I do think my experience has prompted a change in me, a change that I may not have recognized had I not discovered Pacaud and Anthony’s work.

This is not to say that I’ve lost the compulsion to achieve a sense of control, which is evident by my continual need to rearrange the furniture, among other things. The difference now is that I no longer feel compelled to seek out validation for a job well done, which, I believe, is a step towards letting go and ultimately achieving a sense of satisfaction within myself.

That is the power of art.