Alongside writer Olivier Bocquet, comic book artist Jean-Marc Rochette has created an unusual autobiographical account of his experiences as a climber. 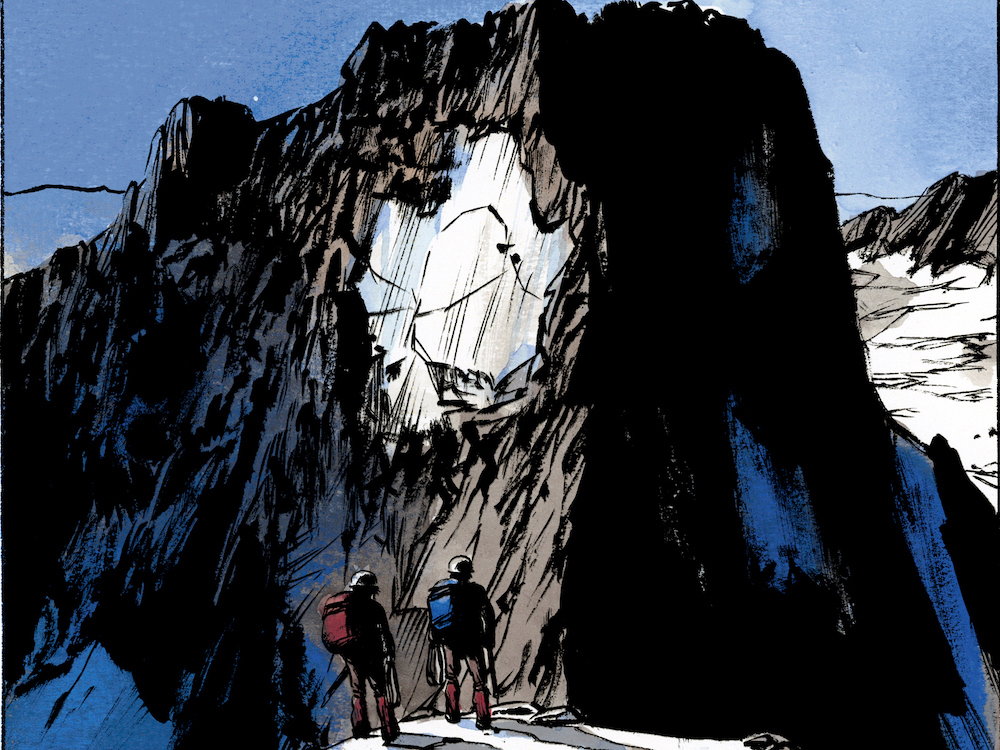 [dropcap style=”font-size:100px;color:#992211;”]C[/dropcap]omic artist Jean-Marc Rochette is probably best known for his work on the glorious post-apocalyptic graphic novel Snowpiercer, which went on to be made into an equally enjoyable film in 2013.

However, despite his prowess as an illustrator, Rochette also spent many of his formative years as a mountaineer, climbing many of the most infamous peaks in the Alps. Alongside fellow climber and comic book writer Olivier Bocquet, he has created an unusual autobiographical account of his experiences as a climber, part personal story and part comic book. It’s a novel approach, and one which enables Rochette to successfully meld the two key aspects of his history.

The book starts with Rochette as a child; his mother, bored with accompanying him to the same museum over and over, suggests a hike. It’s not to his tastes, but the presence of a mountain — and an early attempt to climb it — changes things. He soon develops a love of climbing, despite being initially very naïve about the correct gear to take and how to go about it, depending on his affable but often braggart friend Sempé to assist him. Slowly, Rochette begins to make connections in the climbing scene, despite still being a teenager himself; a large share of these accounts are rooted in early experiences and ambitions, somewhere between juvenilia and a certain seam of machismo as he and Sempé tackle more and more peaks together. It’s incredibly competitive, but the blend of image and text does capture something of the excitement of these early climbs, not to mention the sense of scale and risk. Perhaps a straightforward written narrative would lose some of this.

As he grows up, Rochette devotes more time to his artistic skills, getting his first gigs as a cartoonist and developing his own stark, combative style. Statistics on mountains and climbs accompany a quite literary narrative, as well as of course the artwork itself. This is often cleverly done, such as when giving an account of a serious rock strike, which broke Rochette’s jaw and cost him nine teeth. The pages first turn into blocks of unbroken red, and then — black. It’s simple, but it’s evocative and it works.

However, alongside the climbs, the book spends a fair amount of time representing adults as ‘not getting it’ and whilst this is no doubt exactly as Rochette saw it, some of the handling here is a little clumsy, even cruel. Rochette’s years at boarding school are an opportunity to kick against the pricks, sneaking out on climbs here and there; his teachers are depicted as stuffy sadists getting in his way. Rochette’s widowed mother, a woman who seems only to have wanted the best for her son, is never depicted positively. Drawn as a peripheral figure at best, a whingy liability at worst, I felt sorry for her; her last mention is a brusque dismissal, noting simply that she died and her grave overlooks a nuclear power station she couldn’t even be bothered to protest against, unlike her son. The only adults the boys can seemingly tolerate are other climbers, or relatives of climbers.

Still, all of this goes to show, perhaps, that odd blend of bravado and humility which characterises climbers. Reverence is reserved for climbers who have gone before, but balanced by a desperation to make one’s own mark, even to outdo them. Altitude captures that bloody-mindedness in an interesting and appropriate format.

Altitude is available from SelfMadeHero on 16 April