The Dance of Death: A Vanitas

In this collection of cartoons loosely based on the Danse Macabre, Martin Rowson takes aim at a number of targets from 21st century life he deems significant. 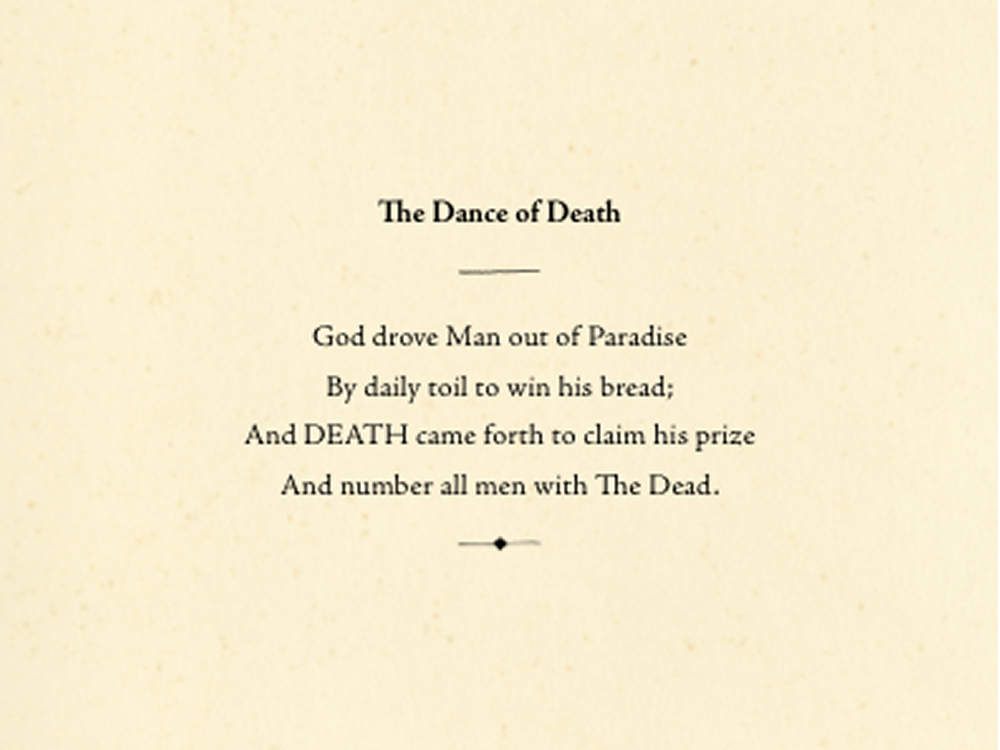 [dropcap style=”font-size:100px;color:#992211;”]T[/dropcap]he Danse Macabre (Dance of Death) was a popular form of allegory in the late Middle Ages famed for depicting all social classes, from princes to paupers, literally in the grasp of Death – Death usually being imagined as a skeletal figure, happily leading his new friends in a dance.

It makes perfect sense that the Danse Macabre was so popular at the time; death was a much more constant, visible presence in those centuries before medicalisation, industrialisation and the sequestration of death behind closed doors. Nowadays, if we encounter death at all it is usually pixelated or in some ways sanitised, and we are more often than not spared its worst excesses by a system which seeks to shield us. For all that, it’s as inevitable for us as it ever was in the medieval period, even if we personally see death rather less. So, can the medium of the Danse Macabre be updated for the modern age?

Cartoonist Martin Rowson – probably best known for his work on behalf of the Guardian newspaper — thinks that it can. In this collection of his cartoons loosely based on the Danse Macabre, Rowson takes aim at a number of targets from 21st century life he deems significant. Some of these, given his political persuasion, are pretty expected; some are less so. The resulting book is a lightweight, reasonably diverting collection of his characteristically heavy linework and caricatures, accompanied by short verses which frame each drawing. As a cartoon book, it’s understandably content-lite but also, if you were expecting something particularly enlightening or meaningful here, then you may find it rather lacking.

A rather ragtag group of people find themselves at Rowson’s mercy. Some of these are absolutely bound to be there: Trump, Putin and Murdoch are all represented, naturally, as are bankers and people in the financial industry; one of the Royals is there to represent his family, too. If you know the Guardian, then there’ll be little to surprise you amongst those names. However, perhaps in the name of balance, there are some less clear inclusions. If some of the cartoons are here because Rowson finds their subjects odious on some level, then others may be here to prove a broader picture, but yet taking aim at surgeons and poets seem like counterintuitive choices, or at least unusual ones. As the whole crowd here are castigated as ‘clowns’ at the start, you have to wonder what comedians and performers have actually done that places them alongside Trump. Of course, Rowson is under no obligation to provoke a deeper point, but what’s left out is as relevant as what makes it in, and the Danse Macabre itself was pretty representative.

This slim volume will obviously appeal primarily to existing fans of Rowson’s work; it does have its own biases and bugbears, which limits the strength of its links to its avowed medieval inspiration, but for those readers fine with that, then this will be perfectly welcome.

The Dance of Death: A Vanitas is published by SelfMadeHero on 31 October

Next Story:
New Exhibition Explores Community in the Age of Climate Crisis