The value of De Niro’s writing is not in what is depicted but in tone, theme, and the disconcerting mood of the short pieces as they seed doubts and second-guesses in the reader.

[dropcap style=”font-size:100px; color:#992211;”]B[/dropcap]y now the gluttony on Christmas TV will be making puree of your higher brain functions.

The linear humour of scriptwriters adhering to an imagined collectivity of yuletide experiences, and the equally linear process of the younger, edgier mavericks bouncing off that very same set of cliches to construct their alternative takes on the season. Either way, it is a hit of sugar to your critical judgment that leaves a sticky residue with the mental equivalent of the morosely-grazed selection box.

For your digestive tract and physical wellbeing, Trebuchet recommends (as always) a hearty dose of kaleshake. For your mind, we offer you the similarly astringent metabolic boost of twisted sci-fi, in Small Beer press’s Tyrannia; a series of short stories which drag the reader into an unsettling, off-kilter world of voluntary captivity.

Alan de Niro, building a collection around the theme of tyrrany – as often self-imposed as it is by the society depicted – constructs his story-arcs to apogee at small, easily-missed coalescences of narrated action, mood and setting. If writing can have an aftertaste, De Niro’s skill is in creating that lingering presence.

The sense of coitus interruptus prompted by Tyrannia’s stories pervades – resolution or denoument in the final paragraphs is deemed too obvious a trait of the short story, and instead De Niro concentrates on creating a sense of atmosphere, of disquiet. The point to the stories is not always apparent, the satisfaction of a solid ending is thwarted by conclusions which leave the reader not so much with questions (which whilst it would be ideal observation for the blurb on the back cover, is hardly a rare or defining reaction to a short story), but with a slight edge of violation. The conventions of narrative have been subverted, the mind reels in rejection.

That truncated mode, thwarted expectation finds its ideal form in the short story, given that it is the closest we get to natural storytelling in our own lives. We hear anecdotes daily, we anticipate their arcing trajectory from introduction to coda, we know where the punchlines will drop. De Niro takes instead the Joycean approach, (and as a lecturer in creative writing, has likely taught Dubliners more often than he’d like), making ‘the odour of ashpits and old weeds and offal’ the defining and most memorable characteristic of his stories, although in De Niro’s case, it is not the ashpits and offal of Edwardian Dublin that pervade the setting, but the conjoined dread stifle of entrapment, captivity and disempowerment.

An unexplained time-loop paradox in ‘A Rendition’ bears a certain similarity of treatment to Nick Harkaway‘s riffing on multiple personality in The Gone Away World, spliced with something of Dan Simmons‘ use of mutable time as a plot device in Hyperion. In terms of distopian post-apocalyptic future imaginings, the roll-call of nu-sci-fi authors can be plotted through their influence. ‘(*_*?) ~~~~ (-_-) : The Warp and the Woof’ echoes much of Ian McDonald‘s Brasyl in setting and tone, with a hint of Paolo Bacigalupi‘s The Windup Girl.

Where Tyrannia diverges from these contemporary heavyweights of science fiction and veers into fantasy is in its avoidance of explanation. Signposting is minimal, partly because short stories do not have the luxury of elaborate sections of dialogue wherein key concepts can be explained, or epistolary sections, news items, or many of the other techniques by which an author can introduce a backstory to a longer work.

We do not learn what has caused the world to look so different from our own in stories such as ‘Walking Stick Fires’ or ‘Plight of the Sychophant’, but are expected to wave such concerns aside in order to concentrate on the setting, action and theme of the stories instead. It feels as though we are expected to be conversant with sci-fi writing of the post-cyberpunk period to fill in the gaps, which, given that 21st century literature (and art, and music) seems to be as much about manipulating the eta-narrative as the Modern was about acknowledging the mechanics of form, may indeed be a perfectly legitimate tactic.

Certainly there are influences here from other sci-fi writers. The drive system of the spaceship in ‘The Flowering Ape’, by which the craft is steered through ‘wherespace’ via telepathic link between driver and engine echoes Greg Brown‘s Engineman, as do the withdrawl symptoms reported when that link is broken (right down to the bar scenes). Law-enforcement by remote proxy will bring the rustbelt of the Alistair Reynolds Revelation Space suite to mind (as will the closed Community and tech-religious cultists of ‘Responds Well to Prayer, and Chartering guild of ‘The Flowering Ape’). [quote]a foreknowledge is assumed

in the reader, or at the

very least an openness to

the possibility of the concepts

But De Niro is no uninspired copyist, retelling the works of more accomplished sci-fi thinkers in different words. His angles and perspectives are different – we see the aforementioned cops behind the proxy, following them into a virtual reality mindscape that, whilst it owes much to Jeff Noon‘s Vurt, or the philosophical musings on virtual world living that pepper the works of Richard Morgan, departs from those concepts, using them as background grist for where he wishes to take the narrative.

And those narratives follow their characters, taking (as Asimov‘s mysteries did decades ago) the scientific quirk of setting as an accepted given – that telepathic ships exist, for example – and from there building a story out of the implications in that.

De Niro is not an explainer, nor is this hard sci-fi of a technical sort where it is the physics of free-fall or the complex sociology of post-mortal nano-enabled humanity are discussed at length. Rather, a foreknowledge is assumed in the reader, or at the very least an openness to the possibility of the concepts implied by the setting, and the author sets to charting a series of investigations into the nature of captivity – self-imposed, accidental, mental, physical, virtual. Birdcages make for a recurrent symbol in a suite of stories which progress from the bleak and horrific temporal paradox of ‘A Rendition’ to the optimistic proise of escape in ‘Highly Responsive to Prayer’.

The closing tale, ‘The Philip Sidney Game’ melds a UBIK-tinted Russian Doll narrative with disconcerting narrative paradox, allluding perhaps to that fine line between physics and metaphysics where the conscious navigation between parallel universes and probablility meet.

A simple sum-up of the stories by subject and plot would be as difficult as it would be futile. The value of De Niro’s writing is not in what is depicted but in tone, theme, and the disconcerting mood of the short pieces as they seed doubts and second-guesses in the reader. 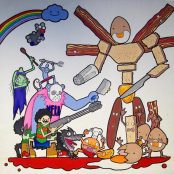