3 Teeth give their audiences a place to shake it out and survive. A sort of spiritual one night stand. And what is that if not the highest apex of rock and roll? 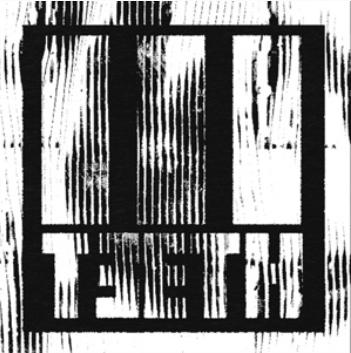 Even before their debut show LA revisionist industrial act 3 Teeth have generated a huge amount of social static. As a barometer of reach and relevance, entering the iTunes top 10 with their eponymous  debut  is a clear indication that for some, the sound of 2014 is Ministry, Tool and Nine Inch Nails.

How did this happen? Head- pounding heavy and catchy as hell isn’t enough; you have to capture a community. Being both a creative director in LA’s leading brand séances and an active founder of the resplendently cyberpunk and razor beautiful Lil Death club night, lead singer Alexis Mincolla has been part of the industrial underground for some time. Looking at picture of Lil Death, the rapier sharp narcissism of LA is clearly on display at the club night, conveying a visceral youth and excitement that provokes jealousy…. Which is how hit records happen: mystery, music and a little envy.

Gaunt and damned, the kids are alright. With a parent-worrying blast of abandon, revolution and casual sex, 3 Teeth have taken the best rock and roll clichés and set them within the peak two decades of pre-millennial industrial And why not? Wasn’t repeated mechanical appropriation and ecstatic decay the whole point?

It would be glib to say that it makes perfect sense for an industrial act to act like a manufactured band. Nevertheless,  it wouldn’t be completely wrong. However 3 Teeth, by leading the process and never shying away from saying ‘Yes, we have the look, feel and sound of a 1991 band (formed in 1987)’ and ‘Yes, that’s what we’re offering’ they have an honesty of sorts.

Self described as a multi-media act, 3 Teeth’s truth is that they use imagery and music to create a heightened anachronism. An anachronism that is familiar, infectious and fun. Oldies might argue that Mark 1 industrial music had more meaning and political overtones. It didn’t, it was simply more original.

But in music, that aural magpie,  what is originality?

Originality, such a loaded term for people post-30, is something that kids have never cared about. Neophyte teens love close influences as they’re a passport to a whole new country of music. They feel instinctively that ‘originality’ is whatever feels new, authentic and ‘mine’.

Were the Rolling Stones truly original? Not necessarily to blues purists. Was Curtis Mayfield original? Ask Pops Staples. Was Aphex Twin original? Certainly popular. Captain Beefheart had Howling Wolf and Zappa had his beloved Doo-wop. Rather than originality per se, what made these artists noteworthy was that they changed the musical landscape around them. Acclaim, whether critical or popular, makes a band culturally important.

External artistic importance (everyone makes music meaningful to themselves) is an altogether slimier poison that no one in their right mind tries to grasp. Being considered influential is itself a double-edged sword. A boost in late career sales is always welcome, but would Justin Bieber’s influences appreciate the association?

Cyberpunk writer William Gibson, describing the mythical band Lo/Rez, describes an act encased in it’s chaotic influences. David Byrne, when talking about  Talking Heads in Wim Wenders’ Until the End of the World wonders whether the future of the band would be a banjo pastiche or something that repeated the past.

The tacit understanding here is that genre itself could well be the artistic form of the future. If the meta-language that humans use to describe Music as it exists as a supra-musical experience is genre (visual symbols, clothes, attitudes, language as well as the music itself) then multi-genre music represents an attempt to describe a hybridised contemporary reality. Or so it appeared to Post-modern thinkers in the 90s.

It’s interesting that in 2014 the hybrid industrial sounds of Ministry as understood by 3 Teeth sound so stridently genre-specific. Was Punk more than 3 chords, coloured Mohawks, plaid pants, studs and leather jackets? Probably, but the united urban outfitted generations of Green Day and Avril Lavigne have found it easier to reference an essential form of history uncomplicated by difference. Ministry might not want to define Industrial, but their followers will.

“There seems to be this huge debate about what industrial is and what it stands for,” Mincolla says talking to LA Weekly “I think we look at it more as a transgressive art form.”

While it’s unclear what the transgressions are (what boundaries exist in contemporary LA art?) the idea of creating a total story is admirable, and better still, 3 Teeth have succeeded. The 3 Teeth experience feels polished, confident, complete and lasting.

Throughout the album the guitar signatures have the same tonal qualities of the early highs of NIN, in themselves modelled on Ministry, though neither 3 Teeth nor NIN have ever managed to capture the groove or swing of Jourgensen’s main gig. Under the early tutelage of Adrian Sherwood the genius of Ministry was that it had a human groove within its programmed beats.

By comparison 3 Teeth remain resolutely cold throughout and the lockstep grooves that make up the most of this record, especially; ‘Dust’, ‘Master of Decay’ and ‘Final Product’ rarely mark themselves out for particular note. If anything, the way the record has been produced has kept everything constrained, to the extent that there isn’t anything ‘lead’ or chaotic.

Rather, everything sits resolutely in place, marching on in Teutonic mechanical terror. A delicious if amoral mix of power, electricity, and 4/4 carnage.  ‘Final Product’, with its anthemic feel (reminiscent of Rammstein’s ‘Du Hast’, though with more pump and less swagger), intersecting with ‘Head like a Hole’ back rhythms and distorted stabs straight from Snap’s 1990 hit ‘I’ve Got The Power’* is an exercise in Industrial good taste. No one influence overpowers anything else and restraining the levels of each instrument gives the track a taut dynamic that pushes quickly along its three minute axis, leaving the listener worked out and ready for a Gatorade.

[quote]Emerging from a defined scene

they reflect the look, symbols, logic

and perspectives of an audience aware

of its own powerless vacuity[/quote]

Every classic industrial album had it’s tribal slow jam and 3 Teeth haven’t disappointed. On ‘Chasm’ we get ritualised chanting, samples about biomechanical systems and  Ofra Haza-esque vocals. What year is this!? Are we  using ‘ethnic wailing’ as a statement on invading Iraq, again, again?

Lyrically, one could joke that, true to the genre, Alexis is riffing on his post-apocalyptic synth settings:  Attack, Decay, Release, Sustain, but as with much on this record, under the veil of immediacy, familiarity and fun,  there is, tantalisingly, more to know.

Alexis’ use of slogan, maxim, and timing reveals the hand of a native to the media jungle, giving us an intimate understanding how 3 Teeth is product of its screwed environment. Emerging from a defined scene they reflect the look, symbols, logic and perspectives of an audience aware of its own powerless vacuity. Creating and containing meaning 3 Teeth give their audiences a place to shake it out and survive. A sort of spiritual one night stand. And what is that if not the highest apex of rock and roll?

One truth is that this isn’t a debut album but rather a culmination of decades of media work, investigation and appreciation. A fact reflected in their restraint, lyrical efficiency, artistic focus, and timing. Whatever they’ve got to say they’re not going to blow it immaturely and say it all at once.

Not being a band of (ahem) youthful inexperience is perhaps why this post-hipster unit sounds as hype-friendly fresh as a 360 curatorial bio-tech mobile-multi-media daisy joint. Their success so far is no surprise, as few other groups seem as focused on what works and on sublimating ego. There are no extreme examples of hyper prowess, the vocals never overshadow the groove, and the synths always support the vocals.

Rather than idea of ‘band’ 3 Teeth have galvanised around the idea of a ‘show’ allowing them to reduce their many ideas into a defined functional product designed to connect with an audience. By applying this perspective to making music they’ve placed their foundations on the more solid parts of the millennial past, excising the dire aspects of 90s industrial & EBM music (i.e. both artistic assertions and pretensions), all the while asking the question ‘Who DOESN’T think we’ve had the apocalypse?’.

“You don’t have to get super creative to make something horrifying, because there is so much horrifying shit out there right now,” – Mincolla, LA Weekly.

3 Teeth’s debut shows very high promise, with instant appeal and a continuous vein of depth that reveals more with each listen. There’s a lot to like. Few bands ever escape their influences completely, and not only have 3 Teeth not tried, they’ve managed to make a better 90s industrial record than 90s industrial bands. The last Ministry records weren’t great and NIN have been following a thread that captures less interest with each release.

Therein lies the rub. No band can repeat themselves and remain vital.Ministry can’t capture the same energy and naivety to make Psalm 69: The Way to Succeed and the Way to Suck Eggs again, NIN can’t remake The Downward Spiral but 3 Teeth can. And have, for this record at least.

This album fucking rocks, but it worries me that I don’t care that it’s not very original. Hopefully this means I’m still young.
Again.

On Art of Fact

* Though sadly without heavy breaks of the middle eight – check it around 3:00. Actually, 3 Teeth should probably get a copy of Mantronix ‘King of the beats’ 12 inch to fully understandthe hedonistic beat frenzies that underpinned industrial drum production. Of course, a few plays of Riot in Lagos by Yellow Magic Orchestra wouldn’t go astray either.