The young Parisian duo Yves Marchand and Romain Meffre continue their large format exploration of abandoned sites around the world.

Industry captures disused industrial sites as desolate ruins of modern civilisation, a concept central to their entire body of work. Their series Theatres, Gunkanjima, and The Ruins of Detroit continue to revolve around the destruction that is left behind in our fast-paced society. Photographs of these immense structures immortalise their forgotten existence.The post-apocalyptic eeriness of these sites forms an amusing, albeit perhaps not wholly fitting, juxtaposition with the elegant townhouse gallery on Fitzroy Square.

Despite their fate, the portrayed places are empowered through theatrical lightning and often lower-central framing. The artists describe these places as modern religionless cathedrals, a perspective that is visible through the grandness of the selected sites. The other-worldly Control Room, Kelenfold Power Station, Budapest (2012)’s massive glass ceiling in the Art Deco control room can at first-glance be mistaken with a stained-glass dome; it initially reminded me of Palau de la Música Catalana’s central mosaic. 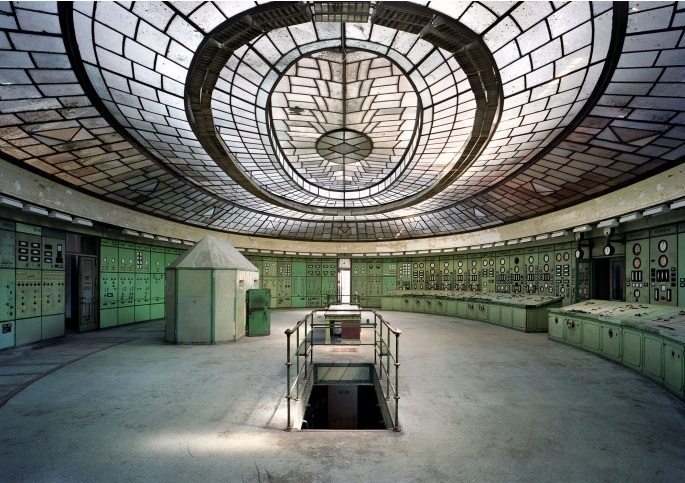 The strange representation of the beauty in industrial architecture creates an uncanny feeling of confusion and displacement; how have these relatively new places been left in the past?

Cooling Tower, Power Station, Monceau-sur-Sambre, Belgium (2011) introduces the contrast between industry and nature through the abandoned tower’s vivid green moss. Yet the nostalgic ‘nature takes back’ theme does not seem to be the aim of the piece; the power station remains powerfully majestic whilst the colourful growth is merely visually striking.

Although the larger scale images of the exhibition are directly absorbing, the two smaller photographs of boilers from Belgium and Philadelphia are at closer sight more complex. The brown frames and lack of border which detract from the control room image perfectly suit the burnt and oxidised iron colour scheme. Their central rectangular composition and balance suggest their position as altars within these urban cathedrals.

Unfortunately, the two thin columns containing 30 miniature images showed a lack of attention to detail. The photographs at the top of the wall reached as high as the tall Georgian ceiling, making them barely visible. Although the contact-sheet style format was perhaps thought of from a sales perspective, it detracted from the strength of the rest of the pieces. An otherwise great exhibition was brought down by several cases of haphazard attention to detail in presentation. The colour of the frames changed from one room to the next yet were still unfitting to some pieces, whilst the combination of a projected film and print photographs simultaneously shown in a room rendered the prints inaccessible. This section of the exhibition dedicated to the Saenger Theatre on the first floor could have completed the exhibition, if only the photographs were not hidden away in the dark.

Despite these finishing details, Yves Marchand and Romain Meffre’s Industry series gives an interesting perspective on modern history, based on rapid consumption and destruction fuelled by massive unnatural sources of energy and gas. The decay of the American movie theatre linked these destroyed spaces to consumptive activity behind the industry, giving an interesting analysis on the history we are currently creating.