Mmmmmm. Stochastic resonance. Making it into shapes and patterns to enhance the signal-to-noise ratio.

This is the kind of stuff we love at Trebuchet. Which is why now is the perfect time to mention the extensive interview with Sunn O)))’s Stephen O’Malley in issue two of the printed magazine. Noise, drones, signal processing, playing gigs in caves and creating sound corridors in central Paris – Mmmmmmm….

In conventional electronics, a great deal of effort is devoted to eliminating stochastic resonance (SR) — the annoying hiss that generally hinders the detection of weak signals and degrades overall device performance. But, what if there were a way to exploit this effect to enhance signal transmission for a new generation of devices, such as bio-inspired sensors and computing processors whose design is based on the neural networks of the brain?

Researchers at Osaka University in Japan are working to achieve just that, using single-walled carbon nanotubes (SWNTs). They created a summing network SR device that detects subthreshold signals, fabricated to include a self-noise component. The researchers report their findings this week in the journal Applied Physics Letters, from AIP Publishing. 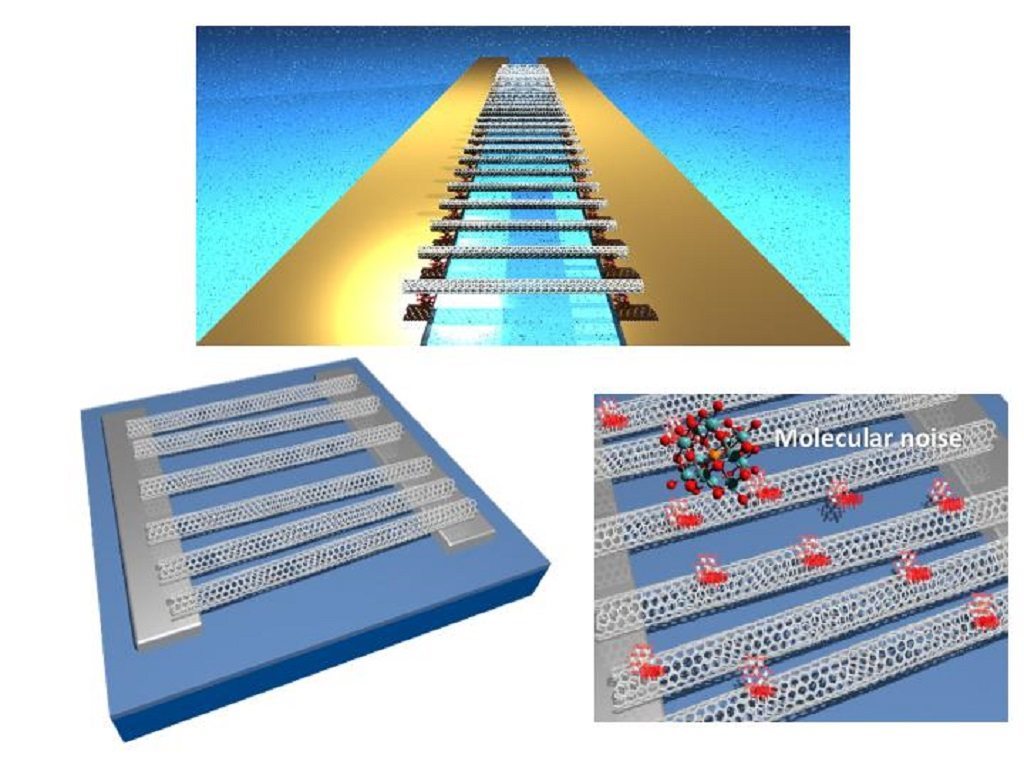 Researchers have known over the last few decades that some animals use SR to enhance the transmission or detection of signals below the detection threshold. Paddle fish living in muddy rivers, for example, can detect, and thus feed on, the nearest plankton only when there is background electrical noise coming from another plankton mass. The background noise is used to amplify the signals of the nearby plankton. Crayfish also use SR, which is part of the mechanical noise in water, to detect subtle movements of predators.

There is also evidence that the human brain uses SR in visual processing. Undetectable light signals to the right eye become detectable through the addition of noise to the left eye. More recently, researchers have discovered that adding random noise such as SR, in the right way, to electronic devices can increase the detectability of signals and the transmission efficiency of information.

There are two basic requirements for developing an SR-based electronic device: a signal detection threshold and the presence of additional noise. To satisfy these requirements in their SWNT device, the research team created a SWNT network in which up to 300 carbon nanotubes were aligned parallel to each other between chromium electrodes, which increased the signal detection ability.

They functionalized the SWNTs with phosphomolybdic acid (PMo12) molecules, which can firmly adsorb on graphite materials, before drying the device on a hotplate at 150 degrees Celsius under atmospheric pressure. The adsorption of the PMo12 molecules on the SWNTs generated additional noise.

“SWNTs can be generators of spontaneous noise, owing to their high sensitivity to external surface perturbation,” Akai-Kasaya said. “What we found is that the introduction of an extra disruptor — molecular adsorption, and particularly with the adsorption of PMo12 — generated a large and tunable type of electrical noise in addition to common environmental noise.”

The group tested 10 different molecules adsorbed in the SWNTs as noise generators and found that the SWNT/PMo12 combination was more than twice as effective as the other SWNT functionalized combinations.

Previous Story:
Capitalism. Either it Goes, or We Do