Starting hot, WOMADelaide got hotter still with the activist politics of Ana Tijoux and the Slavic blues of Warsaw Village Band

Entry is like coming home, your nose is hit by the familiar scent of the pine trees as you walk into the Frome Road entrance and the grounds still feel fresh – no dust raised by processional footfall. Another advantage of arriving early is that we get to catch the ‘Welcome To Country’ performed by members of the Kaurna people , the traditional owners of the land. This is carried out really well by some Very Impressive Indigenous Males; bearded elder Steve Gadlabarti Goldsmith having the last booming word before we begin the scheduled acts.

Warsaw Village Band (pictured) proved to be a pleasant surprise. Fronted by a trio of white-clad female instrumentalists, this band proved to have a lot of kick. Their loping ‘traditional Slavic blues’ was worthy of Cream or Hawkwind and contained some nice psychedelic tinges. Their ‘Prayer For Peace’ became a major groove containing vocal ululations, which they then followed this with a polka. 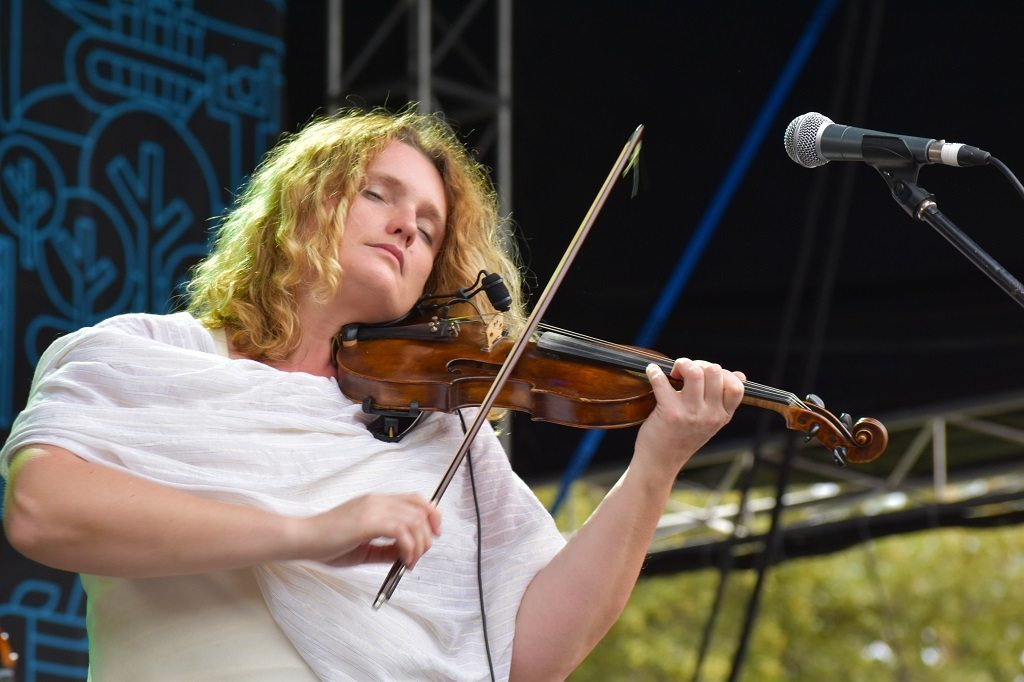 But, their stolid looking drummer assured us, this was not an ‘American cheesy polka’. They got us all involved in some solid vocal participation and then finished off with some trumpet flourishes reminiscent of Miles Davis or Dave Douglas. All being driven by relentless dual drums (the Slavic equivalent to Irish bodhran ) and a marching band bass behemoth.

From the word go they had a good portion of the audience on their feet and moving – but not frantically, in fact it wasn’t really until Ana Tijoux was onstage that we witnessed some really enthusiastic dancing.

Zipping over to stage three I witnessed the beginning of the duo Xyloris White’s sole set. Since the four-day format was adopted we have far more one-off performances, presumably designed to attract a larger audience. Unfortunately this does mean that on occasions two ‘one off’ acts appear at the same time (this happened a lot on Monday as it’s loaded with one offs in order to attract a larger audience, as many people from interstate do not have a public holiday on the Monday). As it is, I wasn’t that impressed by this particular dynamic duo’s efforts, it’s hard to carry off a full set with just two instruments unless you are really special.

So I moved on, and I was glad that I did because on stage two Chilean powerhouse Ana Tijoux and her band were busy blowing off the combined heads of the audience with their frenetic, relentless and powerful Latin music. Now, I was VERY impressed.

Her music has featured in the soundtrack of Breaking Bad and her song ‘Shock’ became a kind of anthem for the student movement of Chile. As she said on Friday ‘Existence is resistance’ and she dedicated a song to ‘all freedom fighters’. Ms Tijoux pens some forceful, inspiring lyrics and from looking at her Youtube content, she’s considerably beefed up her act recently.

She delivers her lyrics in a fast paced hip-hop style over a background of driving horns, percussion and danceable beats – she’s on record as stating ‘hip-hop is the land of the people that don’t have a land’. Child of political activists, her work is passionate and fiery – she was possibly the best act of the weekend.

Previous Story:
Going Down the Soul Mine?

Next Story:
Cabaret Voltaire Go Deep Into The Devil’s Arse (and invite you to join them)