Solid electronica with provenance… from the depths of a Derbyshire cave

But beneath the fey Latin Quarter dadaist allusions and spiky synths pulses a solid Yorkshire heart, more than equal to the task of playing a gig from deep in the Devil’s Arse.

CABARET VOLTAIRE have announced the first UK performance in over 20 years at The Devil’s Arse Cave (aka Peak Cavern) in Castleton, Derbyshire on Saturday 29 April.

Billed as a performance consisting solely of machines, multi-screen projections and Richard H. Kirk, Cabaret Voltaire will perform entirely new material for a performance relevant to the 21st Century with no nostalgia. 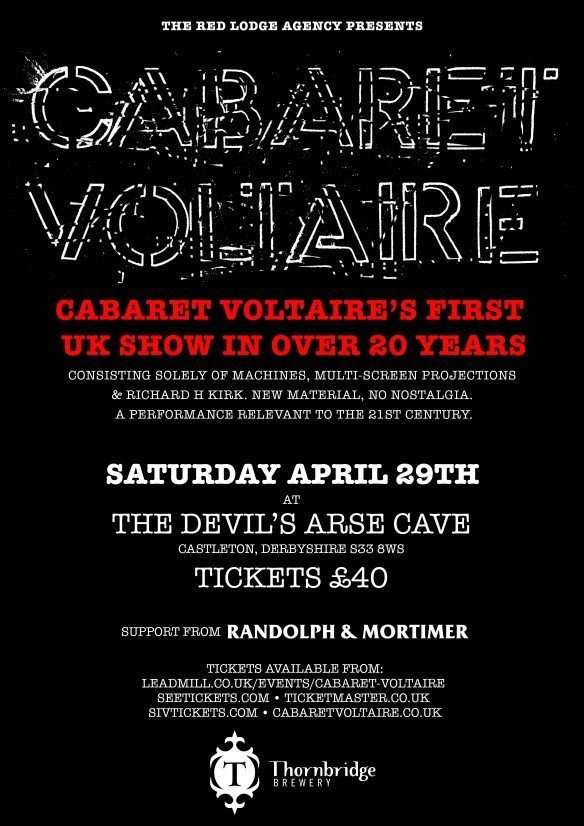 The Devil’s Arse has been host to a handful of performances in recent years, its entranceway serves as a natural amphitheatre and, as part of one of the largest cave systems in the Peak District, it will be a unique host to the return of Cabaret Voltaire to the UK.

Cabaret Voltaire performed the first shows since the 90s in 2014. Recently speaking to FACT, Richard H. Kirk explained “It’s totally new, I don’t play anything from the past. I always make it really clear that if you think you’re going to come and hear the greatest hits then don’t come because you’re not. What you might get is the same spirit.”

Tickets are available from leadmill.co.uk/events/cabaret-voltaire
TRAVEL
Rail: Hope Station (from Manchester or Sheffield)
Bus: 272 from Sheffield
Full details at https://www.peakdistrictinformation.com/visits/peakcav.php

Next Story:
Loitered Lens: Beyond the Beat at the Royal Albert Hall