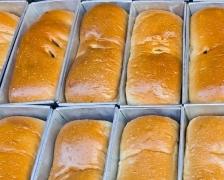 Now Michael Gaenzle and colleagues of the University of Alberta, Edmonton, show why.

During sourdough production, bacteria convert the linoleic acid in bread flour to a compound that has powerful antifungal activity. The research, which could improve the taste of bread, is published online ahead of print in the journal Applied and Environmental Microbiology.

The major benefits from the research are twofold: better tasting bread, says Gaenzle, because “preservatives can be eliminated from the recipes, and because sourdough bread has a more distinct and richer flavor compared to bread produced with yeast only;” and novel tools to control fungi in malting and plant production, via treatment of seeds with the anti-fungal fatty acids.

Genuine sourdough bread differs from ordinary bread in having an extra fermentation step, over and above yeast fermentation. This step is mediated by lactic acid bacteria, typically of the genus Lactobacillus, says Gaenzle.

In the study, “we offered linoleic acid to lactobacilli and screened for organisms producing potent antifungal activity,” says Gaenzle. The investigators then fractionated the metabolites to isolate and identify compounds with antifungal activity. “The identification was a bottleneck in the research project,” says Gaenzle. “In collaboration with analytical chemists, we had to develop novel methods for identifying the compounds.”

“The two compounds and their formation by cereal or microbial enzymes had been described previously, but their antifungal activity and their generation in food production was unknown,” says Gaenzle. These new findings, he says, were “a step towards understanding how and why lactobacilli metabolize fatty acids. This could be useful in the long term to improve our understanding of the biology of these organisms.”

Source: Eurkealter/ American Society for Microbiology. A copy of the manuscript can be found online at http://bit.ly/asmtip0213a. Formal publication of the article is scheduled for the second March 2013 issue of Applied and Environmental Microbiology.