Which Way does the Leaf Go? Drawing Apple Logos

People’s memory, even for extremely common objects, is much poorer than they believe it to be.

A better question – why would you ever need to? All you have to do is look for it on a bumper sticker. You know the ones – stuck there by those krayzee unconventional maverick types who want to display their arty counterculture nature by… parading an allegiance to the world’s largest company.

Could you draw the ubiquitous Apple computer logo from memory? Probably not, as it turns out.

In a new study published in the Quarterly Journal of Experimental Psychology, UCLA psychologists found that almost none of their subjects could draw the logo correctly from memory. Out of 85 UCLA undergraduate students, only one correctly reproduced the Apple logo when asked to draw it on a blank sheet of paper. Fewer than half the students correctly identified the actual logo when they were shown it among a number of similar logos with slightly altered features.

Among the participants were 52 Apple users, 10 PC users and 23 students who used both Apple and PC products — but the findings did not differ between Apple and PC users.

How can this be, given that logos are designed to be simple, memorable and visually distinctive, and Apple’s logo is among the world’s most recognizable?

“People had trouble picking out the correct logo even when it was right in front of them,” said Alan Castel, an associate professor of psychology at UCLA and senior author of the study, who showed in 2012 that most people did not know the location of a bright red fire extinguisher near their office, even though they had walked by it hundreds or thousands of times.

An explanation may be that our brains have learned it is not important to remember specific details. An efficient memory system does not need to store the details of a corporate logo, except perhaps to distinguish counterfeit products, the researchers concluded. 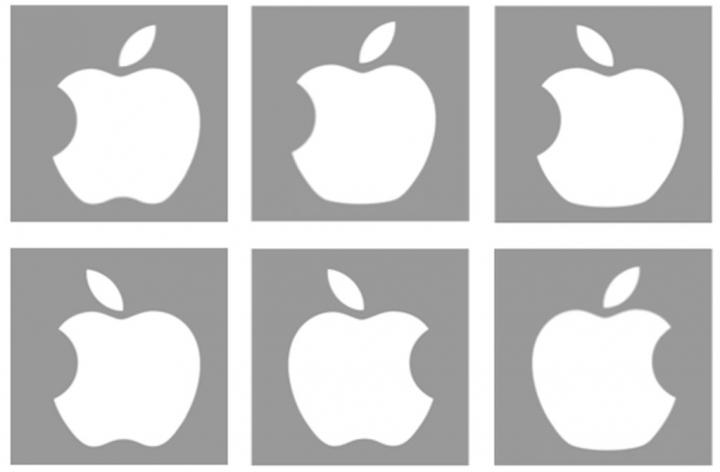 [These are examples of some of the incorrect logos shown in the study. The actual Apple logo (not shown here) resembles the bottom middle panel, with the leaf facing the other way.]

Earlier studies have shown that most people have a poor memory for other items they encounter daily or almost daily, including computer keyboards (even skilled typists have difficulty describing a standard keyboard), pennies and road signs.

In the new study, participants were asked how well they would be able to draw the Apple logo before being asked to draw it.

“There was a striking discrepancy between participants’ confidence prior to drawing the logo and how well they performed on the task,” Castel said. “People’s memory, even for extremely common objects, is much poorer than they believe it to be.”