McQueen wraps the girls up protectively, in fabrics fitted so elegantly and perfectly that you begin to wonder if the clothing is meant to be like a shield. 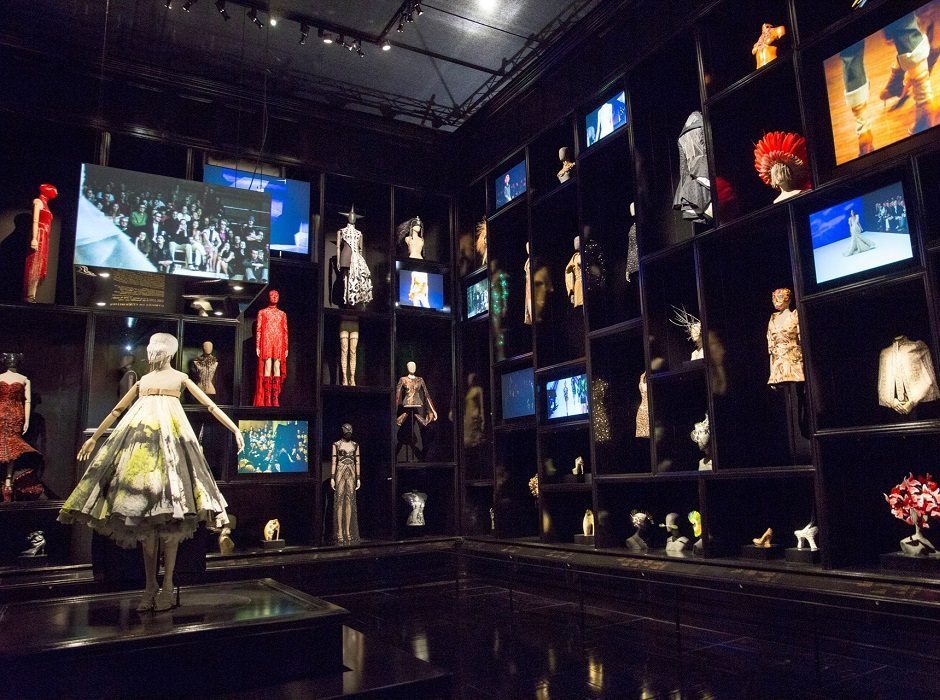 Exhibited content at the V&A’s retrospective of Alexander McQueen dates back to his first MA graduation show at Central St Martin’s.

That first show famously demonstrated a precocious talent, so much so that the collection was bought in its entirety by Isabella Blow, leading to a long-lasting friendship between the designer and the muse. Now, sadly, we are restricted to a posthumous retrospective of an artist and craftsman taken before his time.

You enter the first gallery, where the words: ‘I’m a romantic schizophrenic’, are etched poignantly into the wall and sonic reflections of McQueen’s voice are fired across the room, an insight into his philosophy and how he came to be known as the ‘Hooligan of Fashion’.

‘It’s a jungle out there’, ‘It’s about the raw energy of London,’ ‘no-one to answer to, just myself,’ ring out, and other mental notes explain how he was experimenting with new ways of cutting; his response to the inspirational force of London; how he had to buy fabrics with his dole money and most importantly: anarchy, independence and freedom of expression.

One of the things you notice at the show is how McQueen wraps the girls up protectively, in fabrics fitted so elegantly and perfectly that you begin to wonder if the clothing is meant to be like a shield. The tendency is seen more explicitly in the American footballer design, ‘It’s Only a Game’, (Spring/Summer 2005) or in the breathtaking Joan of Arc inspired body armor with ruby red crystals (Fall 2009) or even in the reflections, where the mannequins are viewed with mirrors from different angles.

‘Pepper’s Ghost’, ending the ‘Widows of Culloden’ show, is a hologram of Kate Moss emerging through the clouds that clothe her, her arms strewn like rain as she moves listlessly though out the space. McQueen works with the models as a canvas. You begin to wonder if their true selves have become lost somewhere within the garments. Have the girls started to merge and become part of artwork?

The real magic heart of the show is The Cabinet of Curiosities, based on the 18th/19th century fashion for curios and objets d’art. Surrounded by boxes, it is as if we enter a box of jewels. Televisions switch between catwalk displays, we can see the model’s expressions explore the performance, as they become part of the theatre. In Highland Rape (2004) illustrating the abuse of Scotland, girls are fragile and broken, or project a sense of distaste in their eyes as collars get higher and the coat hanger-shaped coats reach extremes, leaving the coldest of shoulders.

Girls walk through water, armadillo feet grow scales as the world is taken to the next century, where environmental catastrophe has surpassed its limits and the humans return to the water in Plato’s Atlantis (Spring 2010), futuristic and aquamarine.

The show takes you on a journey into the mind of McQueen, different rooms reflecting the different expressions in his work, from the ‘Romantic Gothic’, installations of the future in ‘Plato’s Atlantis’, detours into the darkness in‘The Horn of Plenty’ (2009 – 2010) or the reflections on the regal in ‘The Girl Who Lived in the Tree’ (Autumn/Winter 2008), positioned in juxtaposition to the proud and natural Scottish beauty with ‘The Widows of Culloden’ (Autumn 2006).

The aftermath of the exhibition elates and inspires, enforcing the view of McQueen as more of an artist than designer, with fashion as his tour de force. Apparently though, McQueen would have hated a highbrow narrative accompanying the show. However, whilst still spectacular, it would have been fascinating to learn more about the ideas behind the concepts in this challenging and thought-provoking exhibition.

Next Story:
The Other Garden