Where do Jellyfish come from?

Scientists have cast doubt on the widely held perception that there has been a global increase in jellyfish. 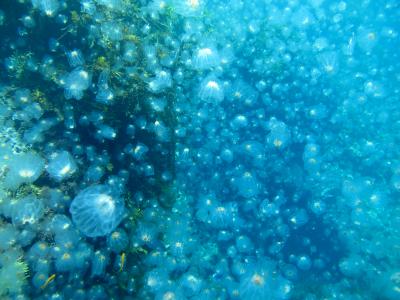 Well this could be one explanation. Another might be that they are the sentient leftovers from MacDonalds (lawyers note spelling) grease shakes.

Scientists have cast doubt on the widely held perception that there has been a global increase in jellyfish.

Blooms, or proliferations, of jellyfish can show a substantial, visible impact on coastal populations – clogged nets for fishermen, stinging waters for tourists, even choked cooling intake pipes for power plants – and recent media reports have created a perception that the world’s oceans are experiencing trending increases in jellyfish. Now, a new multinational collaborative study, involving the University of Southampton, suggests these trends may be overstated, finding that there is no robust evidence for a global increase in jellyfish over the past two centuries.

The results of the study, which includes lead co-author Dr Cathy Lucas, a marine biologist at the University of Southampton, appear in the latest issue of Proceedings of the National Academy of Science (PNAS manuscript # 2012-10920R).

The key finding of the study shows global jellyfish populations undergo concurrent fluctuations with successive decadal periods of rise and fall, including a rising phase in the 1990s and early 2000s that has contributed to the current perception of a global increase in jellyfish abundance. The previous period of high jellyfish numbers during the 1970s went unnoticed due to limited research on jellyfish at the time, less awareness of global-scale problems and a lower capacity for information sharing (e.g. no Internet).

While there has been no increase over the long-term, the authors detected a hint of a slight increase in jellyfish since 1970, although this trend was countered by the observation that there was no difference in the proportion of increasing vs. decreasing jellyfish populations over time.

Dr Cathy Lucas, who is based at the National Oceanography Centre, Southampton, says: “Sustained monitoring is now required over the next decade to shed light with statistical confidence whether the weak increasing linear trend in jellyfish populations after 1970 is an actual shift in the baseline or part of a larger oscillation.”

To date, media and scientific opinion for the current perception of a global increase in jellyfish was evidenced by a few local and regional case studies. Although there are areas where jellyfish have increased; the situation with the Giant Jellyfish in Japan and parts of the Mediterranean are classic examples, there are also areas where jellyfish numbers have remained stable, fluctuated over decadal periods, or actually decreased over time.

Increased speculation and discrepancies about current and future jellyfish blooms by the media and in climate and science reports formed the motivation for the study. “There are major consequences for getting the answer correct for tourism, fisheries and management decisions as they relate to climate change and changing ocean environments,” says Dr Lucas. “The important aspect about our work is that we have provided the long-term baseline backed with all data available to science, which will enable scientists to build on and eventually repeat these analyses in a decade or two from now to determine whether there has been a real increase in jellyfish.”

“The realisation that jellyfish synchronously rise and fall around the world should now lead researchers to search for the long-term natural and climate drivers of jellyfish populations, in addition to begin monitoring jellyfish in open ocean and Southern Hemisphere regions that are underrepresented in our analyses,” says lead author Dr Rob Condon, marine scientist at the Dauphin Island Sea Lab (DISL) in Alabama.

Given the potential damage posed by jellyfish blooms to fisheries, tourism and other human industries, the findings of the group foretell recurrent phases of rise and fall in jellyfish populations that society should be prepared to face.

Previous Story:
GOVES: A Crèche for the Lonely and Peculiar