When Josh Homme (ex-Kyuss, Queens Of The Stone Age, Eagles Of Death Metal, Desert Sessions) says a band are ‘The Best Band You Have Never Heard Of’, you might actually want to pay attention.

As strange as he may be at times, the multi-instrumentalist has been one of the cornerstones of the ‘Desert Rock’ sound, having of course had a helping hand in penning one of the finest stoner rock albums ever (the timeless Blues For The Red Sun, so when he says a band are good, you might want to take it on board.

Truckfighters are a power trio with stoner and desert rock stylings. Forming in 2001, they have had a few line up changes but through this course, the ‘Fuzz Monster’ have released four cracking albums and a fifth is on the way (September 30th). 2014’s Universe, their fourth album, blew me away. The hypnotic feel of the vocals, the melodic passages and heavy riffery when needed sounded so surreal that every track kept me engaged throughout. Having hoped that V followed in this style, I was quick to jump at the chance to listen to it. With that said, and the obligatory introductory informative blurb out the way, it’s time to rev the engines on this big rig of Fuzz.

The appropriately named album opener, “Calm Before The Storm” can be looked at on two fronts.

Firstly, getting the ‘risque’ factor out the way, its dramatic music video is based on a tragic murder in the band’s native Sweden back in 2015 when teen Lisa Holm was abducted and killed by a 35 year old Lithuanian man (Google it for more information). The video depicts a broad outline of the events, simultaneously running Lisa’s last day in ‘forward’ time, and the whole finding the body/search and rescue manhunt effort in ‘reverse’. Both sides of the story playing out simultaneously in their respective orders makes it an interesting piece of cinematography, and the way the music works over it makes it a chilling and thought provoking piece of film.

Musically, it sets the scene for the album. Its atmospheric and gentle opening has a warm quality to it. The slight drone effect coupled with the very audible string scrapes as the notes and chords change, laced with that edge of reverb and delay, give a rich feel whilst soft vocals help complete what is a hypnotic effect. Slow and methodical whilst remaining in a seemingly free-time feel. The gradually fuzzing and overdriven guitars grow in prominence. Sweet double stops and blues licks feature prominently, giving a subtle but intense build up feel which only becomes instantly noticeable just shy of the halfway mark. From here, it is all out fuzz. The pounding bass driven riff with slight Tool-like chord use from the guitars kicks in with some force, and the urge to headbang is near impossible to resist. Still staying vocally soft, there is a strange dynamic to the music which peaks before slowly calming down before a final build. Although anticipated, it still hits hard, but unlike the overly ferocious tones you would expect the fuzz and overdrive remains strong, augmented with surging and swirling wah and phaser effects, fattening the sound up before it comes to a close.

“Hawkshaw” has a wonderfully crafted bass and drum intro riff which, when joined by the guitars sounds a hell of a lot like Tool and the material from their 10,000 Days album. Powering on, it calms for the verse. Once again, the soft vocal approach with its haunting and beautiful sound, backed up by a subtle bassline, simple drums and some little clean licks eventually gives way to a fine uplifting chorus. Cinematic sound, layered with fuzz, overdrive and wah, it literally crackles with the full fury of heavy desert rock. Keeping with the descriptions and metaphors, it’s like a sandstorm of rawness blanketing the landscape the music is creating and, as the verse starts again it slows down, almost like the maelstrom of sand coming to rest and smothering everything it has swept across. These flare ups of musical intensity persist through the song and the hypnotic feel really draws you in, burying you along with everything in its path.

“The 1” opens up with an infectious and  powerful hard rock groove which almost begs you to move along in time to it. The simplistic melodies work well and add some flavour to the sound before it rolls off the dirt and switches to a light, crisp distortion for the verse. Simplistic chords are delivered in short bursts before they begin overlapping under the more prominent vocal lines of the verse. The bass kicks in with a vengeance as it progresses, giving the track a thick low end and creating an almost smothering feel as it just heaps layers and layers of stoner rock goodness over you. With the intricate drum patterns adding to the hypnotic factor of the track and the layers of fuzz and spaced out vocals, this track is all about immersing yourself in it. 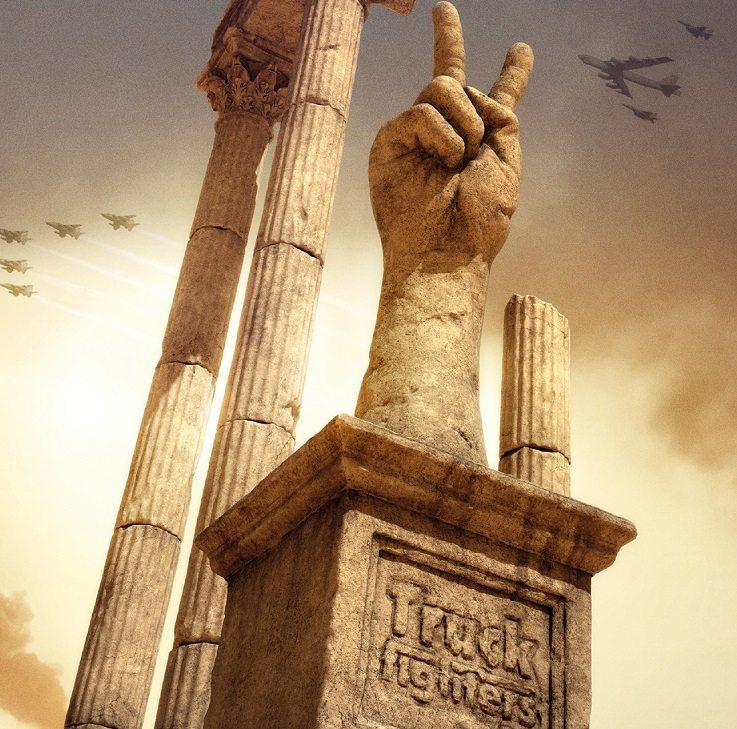 Slowing it a little to begin with, “Gehenna” has a dirty blues feel to it. With the bright, nimble riff and impressive drums it soon goes into the familiar lumbering stoner groove we’re more accustomed to. Dirty, heavy and pounding, like fellow stoner rock mainstays Fu Manchu and QOTSA, it goes about with minimal fuss, letting the combination of the instruments and vocals give a bigger feel than what is actually there. With the hazy vocals over the warm and rich fuzzy tones, it really hammers away with a different intensity to more traditional, heavy stoner stylings. Using volume more than musical delivery to add that extra kick to the sound, the dynamic aspects (from subtle vocal caresses over lightly muted overdrive which shift to more full bodied vocals and rich tones and melodic progressions) switch it up several times, keeping the song flowing smoothly but still having enough diversity to keep it rolling on fine.

“The Contract” slows it down even more. Droning bass and drums give way to a simple melodic guitar lick which, when combined with the drums and bass, gives a very hypnotic effect. With its spell cast the vocals come in once more, bringing with them the hazy sounds and mystique. Bordering on the surreal as it weaves its way across the vast desert of stoner sounds, the track picks up the intensity but pulls it right back, bringing back that familiar feel of Tool once again. The pseudo prog approach to the stoner rock sound works a treat, as demonstrated earlier on in the album. Subtle rhythmic shifts in the guitar and drum patterns help give a shifting feeling and when the big fuzz kicks in, raining down with huge walls of bass and chords, it really sounds colossal without going over the top or being needlessly heavy.

“Fiend” is the penultimate track and much like the previous ones, it’s got that slightly twisting and complex feel in the intro which oozes fuzz rock at its finest. Descending into a retro-rock sound for the verse with the way the bassline and drums dictate the progression and sound, the vocals are softer and, despite being slightly lower in presence compared to the other instruments, ring out cleanly with a nice melodic touch. As the guitar and bass thicken the sound up for the chorus, it keeps the steady rock beat going strong. With a fat sound, perfect to headbang or dance to, its infectious rhythmic hook sinks in and isn’t easy to shake off.

Closing this trip through the stoner rock musical desert is “Storyline”. Its massive fuzz loaded, doom-friendly pace rumbles on from the onset of the track, underscoring its crushing but beautifully hypnotic melodies. Hazy as always but full of power and emotion, the vocals offer a slight spot of serenity in the maelstrom of fuzzed out heaviness. Pounding away like a rhythmic titan it serves as a fitting curtain call to the album. Drawing from all the tracks before it, incorporating the pseudo-prog undercurrents and the hammering fuzz and hard rock for the heavier aspects, but easing off for the mellow clean sections, it keeps everything compact but still has that gigantic sound about it. Wah pedal augmentation appears in the final climactic run up, surging forwards like a sandstorm ready to engulf all in its path…. Then it subsides. Closing with a mellow acoustic melodic section, it is a far cry from the fuzzed behemoth mere seconds ago, but as the album began with an unsettling sense of serenity, it closes with a blissful and relaxed, almost comforting feel, drawing the curtain on an excellent musical experience.

Having followed this band for the past two years and gained a slight understanding (and a massive appreciation) of their talent and musical vision, V is, in my opinion (naturally) the band’s finest work to date. Powerful, atmospheric, vivid and stimulating, it is essential listening for all those who appreciate a well-crafted album.