B
eer, and the yeast we use to make it, has been around a long, long time.

However, until recently, we haven’t had much hard scientific data to complement our use of those bubbling little microbial partners in brewing.

Enter genome sequencing and the staggering depth of detail it allows for study of organisms, followed by deeper knowledge of beer yeast’s long history and with luck, better brews.

Incidentally, note the use of the term ‘long history’ above. Just to clarify things: BREWDOG DID NOT INVENT BEER EVEN IF THEY’D LIKE US TO BELIEVE THE STUFF NEVER EXISTED BEFORE THEY HARD-LAUNCHED THEIR OVER-MARKETED, OVERPRICED OVER-HYPED, OVER-HIP NOVELTY BREWS.

Today’s industrial yeast strains are used to make beer, wine, bread, biofuels, and more, but their evolutionary history is not well studied. In a Cell paper, researchers describe a family tree of these microbes with an emphasis on beer yeast. The resulting genetic relationships reveal clues as to when yeast was first domesticated, who the earliest beer brewers were, and how humans have shaped this organism’s development.

“The flavor of the beer we drink largely depends on yeast,” explains Kevin Verstrepen, a yeast geneticist at the University of Leuven and VIB in Belgium. “We’re drinking the best beers now because ancient brewers were smart enough to start breeding yeast before they knew what they were doing. It was really an art.”

With a team of bioinformaticians led by Steven Maere, a computational biologist at VIB and Ghent University, and beer scientists from White Labs in California, Verstrepen and his colleagues sequenced the genomes of 157 different strains of yeast used to make beer, wine, spirits, sake, bread, and bioethanol, as well as some used in research labs, to explore the species’ evolutionary history. The researchers also experimentally tested traits such as stress tolerance to investigate the interaction between the genome and the yeast’s behavior.

According to the analysis, the industrial yeast used today came from only a few ancestral strains. Five large groups separated out genetically, with strains mainly clustered together according to their industrial purpose. Geographic boundaries further divided each category: in one grouping of beer yeast, for example, the strains from Belgium and Germany were closely related, but separate from those in the UK and US.

Brewers use the same yeast to make different types of beer, so beverages such as ales or stouts didn’t generally have separate strains associated with them. However, a few distinct strains were associated with beers that have very specific traits, such as the smoky clove-like flavor of German Hefeweizen beer.

Using the genomic data, the researchers traced the common ancestor of the industrial beer and wild yeasts to the 1500s–before the formal discovery of microbes. “If early brewers had a very good fermentation, they were smart enough to harvest the yeast sediment and use it to inoculate the next batch, even if they didn’t know what was floating around in it,” explains Verstrepen. “Reusing the microbes to make beer completely separated them from nature. The yeasts were evolving in the brewery.”

The research team uncovered a number of genetic patterns related to the domestication process. Wild yeast can sexually reproduce during times of starvation or stress, but today’s beer yeasts have lost this ability–they only have functional genes for asexual reproduction, likely due to their cushier living conditions. “They essentially became sterile,” says Verstrepen.

“Four centuries of domestication have also left marks in beer yeast genomes associated with traits that are useful in a brewing environment,” says Maere. “In various beer yeast lineages, specific genes have been amplified, deleted, or altered to optimize growth in beer fermenters and beer taste.” 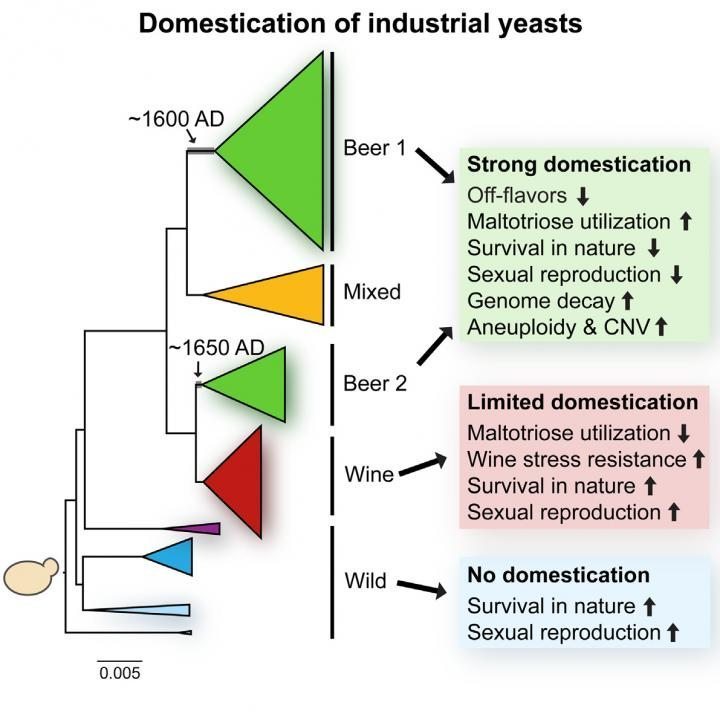 In particular, the researchers found evidence for amplification of genes involved in metabolizing typical beer sugars and selection against production of 4VG, an undesirable flavor compound produced by most natural yeasts. “As far as we know, there’s no selective advantage in suppressing the production of 4VG” says Verstrepen. “It must have been the brewers saying, ‘This tastes good, we’re going to reuse it.'” Wine yeasts also displayed a genetic resistance to copper, which is used to fight fungal infections in the vineyard and can end up in the grape juices.

Verstrepen’s team is continuing research to breed new yeast strains with characteristics useful to industry, and will soon be adding a brewery to the lab to conduct further experiments. “It’s a short jump from working with yeast to trying to make better beer yeast,” he says.