Tracking Global Warming With Mother of Pearl : The Ocean’s Tree-Rings

Oyster middens have long been used by archaeologists as a means of dating human habitations – the readily available and easily gathered packages of protein were not always a rich man’s luxury, after all.

Now, researchers at University of Wisconsin-Madison have discovered a novel way to measure historic sea temperatures using the layers in their shells.

Mother-of-pearl or nacre (pronounced nay-ker), the lustrous, tough-as-nails biomineral that lines some seashells, has been shown to be a faithful record of ancient ocean temperature.

Writing online in the journal Earth and Planetary Science Letters, a team led by University of Wisconsin-Madison physics Professor Pupa Gilbert describes studies of the physical attributes of nacre in modern and fossil shells showing that the biomineral provides an accurate record of temperature as the material is formed, layer upon layer, in a mollusk.

“We can very accurately correlate nacre tablet thickness with temperature,” says Gilbert, explaining that mother-of-pearl is formed as mollusks lay down microscopic polygonal tablets of the mineral aragonite like brickwork to build layers of the shiny biomineral.

The work is important because it provides scientists with a new and potentially more accurate method of measuring ancient ocean temperatures, improving on methods now used with other biominerals to tease out the record of the environmental conditions at which the materials formed in the distant past.

“Everyone else measures temperatures in the ancient world using chemical proxies,” says Gilbert, referencing methods that, for example, use ratios of isotopic oxygen locked into tiny fossil shells made by marine microorganisms known as Foraminifera to get a snapshot of ocean temperatures in the distant past.

The method devised by Gilbert and her collaborators is extraordinarily simple: using just a scanning electron microscope and a cross section of shell, it is possible to measure the thickness of the layered microscopic tablets that compose nacre in a shell. The thickness of the tablets, explains Gilbert, correlates with ocean temperature as measured in modern shells when ocean temperatures were known at the time the shells were formed.

The new work by the researchers from Wisconsin, Harvard, and the Lawrence Berkeley National Laboratory provides a novel physical approach to measuring past climate, says Gilbert, an expert in biomineral formation.

“If what you are measuring is a physical structure, you see it directly,” says Gilbert. “You just measure nacre tablet thickness, the spacing of the lines, and it corresponds to temperature. When the temperature is warmer, the layers get thicker.”

The new study looked at fossil samples of nacre as old as 200 million years from a mollusk in the family Pinnidae, large, fast-growing saltwater clams that live in shallow ocean environments. Today, as in the distant past, the bivalves are widespread in tropical and temperate coastal and shallow continental shelf environments. 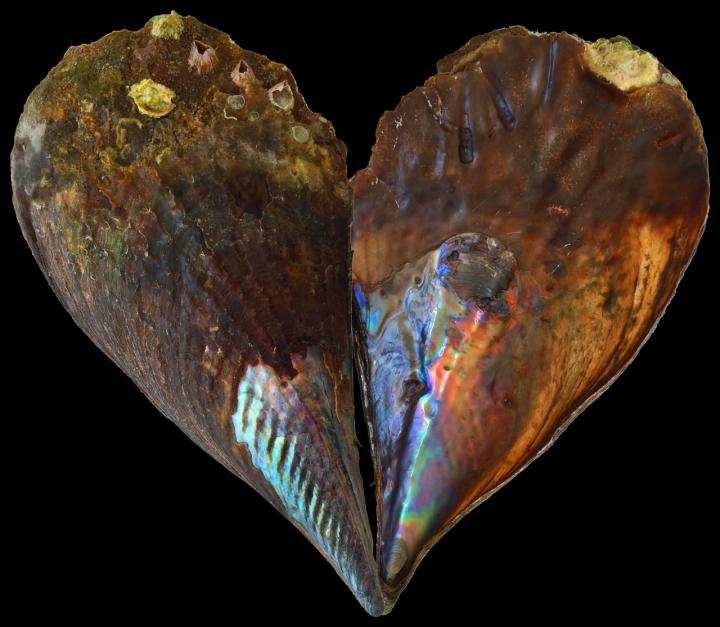 The new method is potentially more accurate, Gilbert notes, because the chemistry of fossil shells can be altered by diagenesis. Diagenesis occurs over geologic time, during or after sediments rain down on ocean beds to form sedimentary rock. Fossil shells may partially dissolve and re-precipitate as calcite, which fills cracks in aragonite nacre, thus skewing the chemical analysis of a sample, if analyzed as a bulk sample.

“If the chemistry changes after the death of a fossil, the formation chemistry isn’t necessarily preserved,” says Gilbert. On the other hand, “if the physical structure is altered by diagenesis, you will notice immediately that nacre is no longer layered, and so you will know that it’s not worth analyzing that area. If just a few nacre tablets are preserved, their thickness can easily be measured” meaning the new technique can augment current geochemical methods used to assess past temperatures, and thus help reconstruct ancient climates, especially the shallow marine environments that preserve most of the world’s invertebrate fossil record.

The family of mollusks in the new study has lived in the world’s oceans for more than 400 million years, potentially leaving a clear record of ocean temperatures into the distant past. For purposes of assessing climate, the record is valuable because not only does it say something about past climate, but the data can also help modelers forecast future climate and environmental change.

Next Story:
Have An Imaginative Christmas