Although they’re still going strong these are in a way end-of-an-era shows carrying a huge and fascinating weight of history. 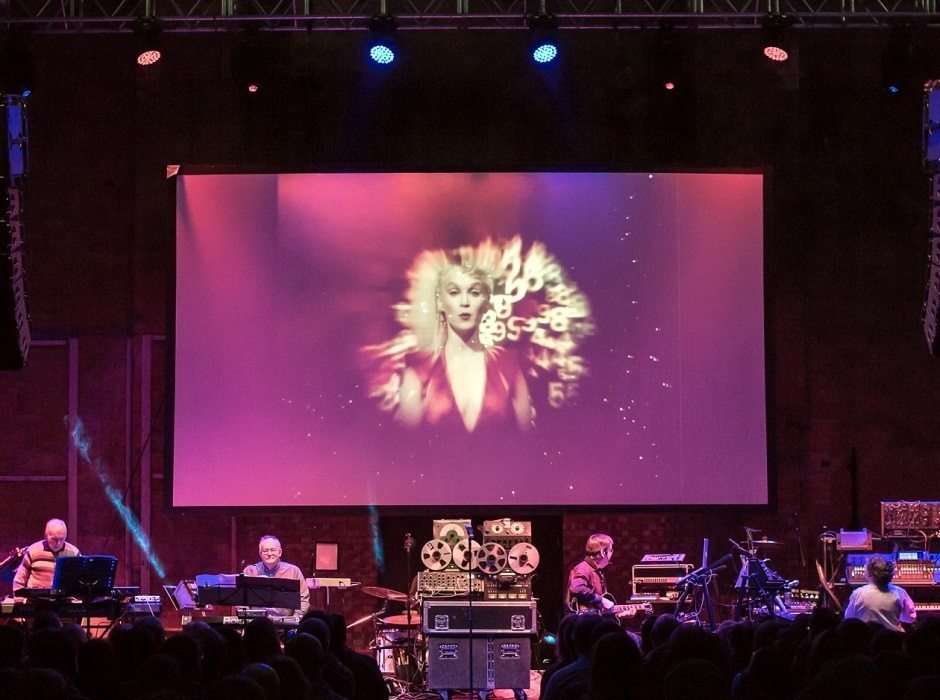 [dropcap style=”font-size:100px; color:#992211;”]I[/dropcap]t was quite appropriate that this concert took place in the Brutalist Queen Elizabeth Hall, which stood in for an alien planet in at least one Doctor Who story and the facade of which has been knowingly vulgarised and dumbed-down in recent years.

History and its implications are unavoidable at a Radiophonic show, not least as between them Dick Mills, Roger Limb, Paddy Kingsland and Peter Howell have the best part of two centuries’ worth of creative experience (The Telegraph recently described them as “Sexagenarian space-rockers”).

After being shut down by John Birt in 1988 at a time when it was losing its sonic distinctiveness, the renowned Radiophonic Workshop went through a long period of relative obscurity. The expensive vinyl re-issues of albums for on sale at the show were often (undeservedly) charity shop fodder 10 or 15 years ago.

Since making its live debut in 2009 with the addition of Radiophonic archivist Mark Ayres and ex-Prodigy drummer Kieron Pepper, they’ve hit the festival circuit, including Glastonbury, Bestival and the opening of The Commonwealth Games in Glasgow (a nod to the old public service ethos). Some of the instrumentation used and the jovial air emphasised crowd-pleasing over experimentation but the crowd certainly were pleased and it’s hard to totally begrudge these veterans some fun.

It’s clear from the start that this is a meta-experience: as they admit they’ve effectively become their own tribute band and much of the time they’re playing along to images of themselves in their youth, hard at work amongst the dials and lumbering machines of the original workshop. The effect is poignant and uncanny, especially when they perform the work of now departed members Daphne Oram, Delia Derbyshire and John Baker. Derbyshire’s odd but endearing ‘Ziwzih Ziwzih OO-OO-OO’‬ was given a spirited rendition and went down well.

As the most senior member with the longest service in the workshop, Dr. Dick Mills acts an amiable supervisor, introducing the evening, benignly observing his colleagues’ work and operating the most obviously Radiophonic device in view, a reel to reel tape recorder. He gave an added historical perspective by recalling childhood memories of being at the South Bank during the Festival of Britain. Since then British post-war modernism in architecture and sound has been, gone and now been revived in an openly anti-modern cultural context and this is reflected in how what were once very radical pieces now evoke cosy glows of recognition.

Later in the show Peter Howell reinforces this point. Discussing an album they recorded last year, he describes working with MetaSynth software which he claims can do everything that the entire physical workshop could have done in its heyday. The still-open question this raises is whether this virtualisation is merely a technical, labour-saving leap forward or also a creative advance.

They may have lost the ‘BBC’ from the name and at one point Paddy Kingsland made a barbed and much applauded reference to a time when the BBC still believed in education but all the vintage material was backed by visuals of the workshop itself or of the programmes they soundtracked. While many of the audience are not as young or nimble as they were, it’s not hard to imagine them rioting if there hadn’t been a large dose of Doctor Who. Selections included Hartnell-era Cybermen and spaceships, Jon Pertwee dodging Cybermen, the infamous Sea Devils, Tom Baker’s regeneration into Peter Davidson (for some one of the most underwhelming and bathetic moments in TV history) and a Sylvester McCoy clip I could well have done without.

A more adult workshop science fiction soundtrack was for the TV version of Quatermass and The Pit for which the workshop provided the unearthly Martian sounds that pursue a terrified worker into a churchyard. The clip was tantalisingly brief and it would be great to see a longer live soundtrack to this iconic series.

One of the revelations was the selection from The Changes : a bizarre dystopian eco-drama for children of the type it’s hard to imagine being made now.

In the cosy glow of nostalgia it’s easy to forget the deeply uncanny nature of so much 1970s childrens’ entertainment, much of it enhanced by the Radiophonic soundtracks. Yet some of the biggest applause was for the versions of the Newsround and Words and Pictures soundtracks, the former a key part of the BBC’s attempted ideological conditioning of its young audiences and the latter a fun literacy programme performed jocularly with various objects including a twanging ruler. There was often a strong end of the pier show atmosphere, it was knowingly stagey and eccentric in a deeply English way.

In a subtle touch the old BBC testcard graphics were shown updated in HD and widescreen versions. Those able to remember and feel and emotive pull from the testcard and the 1970s programmes featured formed the bulk of the audience, deeply appreciative at having so many nostalgic buttons pressed. Peter Howell introduced his ‘Greenwich Chorus’ from the soundtrack of the 1981 documentary The Body in Question. Another Howell piece was ‘The Astronauts’ accompanied by Apollo-era space programme footage which now looks cosily archaic more than heroic.

Now in the actual rather than imagined 21st Century some of this material seems dated and the use of so much traditional instrumentation (grand piano, bongos, bass, guitar) seems to tie in well with the general loss of futurist faith marking our time. It’s important to remember that so much of this now cosy material was produced in an often grim and immanently apocalpytic Cold War context and it could have been interesting to have this darker side of the back catalogue explored more.

Yet interspersed among the vintage material were plenty of new tracks, some from a limited album released last year and some previously unperformed. ‘Wireless’ begins promisingly with an atmospheric collage of radio voices including another instant atmosphere-generator, the Shipping Forecast. However, the more melodic main section didn’t quite live up to the introduction. Other new tracks featured some amateurish hand-filmed visuals that surely have personal significance for the composers but weren’t fully convincing. The photos of Peter Gabriel’s studio that appeared at one point also seemed over-literal and out of place. The most successful of the new tracks was ‘Electricity Language and Me’ which had the feeling of some of Derbyshire’s more experimental material and also 1990s-era Future Sound of London. The visuals for this were also much more impressive and it will be interesting to see if they continue to work in this direction.

For the compulsory finale they returned to Doctor Who performing a strong extended version of the main theme that Dick Mills assisted with all those decades ago.

The mere fact of watching these veterans performing is impressive and even if there are some self-indulgent and overly proggy moments seeing them discuss and perform their own work is a pleasure. For as long as they still can they intend to indulge themselves and their devoted audiences as much as possible and in a sense that’s enough. Although they’re still going strong these are in a way end-of-an-era shows carrying a huge and fascinating weight of history.

Perhaps it’s now for the myriad of producers inspired by their work (or some of the younger audience members) to carry forward the Radiophonic spirit but in the meantime the live Radiophonic experience is an uneven but unique and memorable one.