“The Problem With Nigeria…” 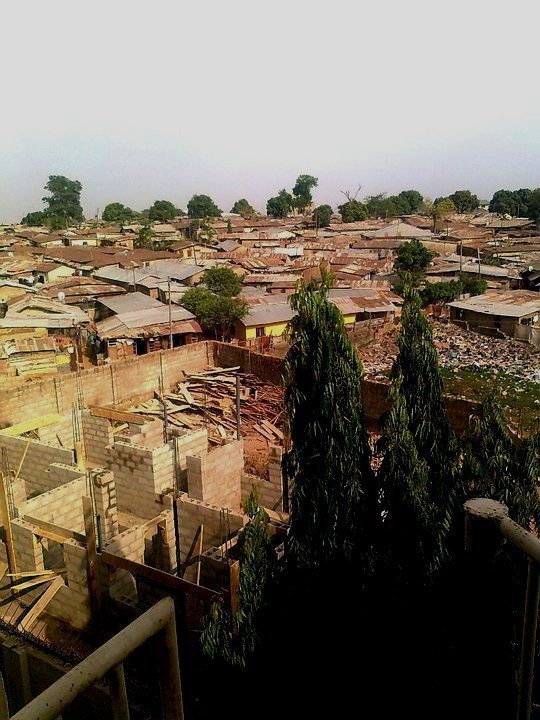 [dropcap style=”font-size:100px; color:#992211;”]K[/dropcap]eith and I have decided that the problem with Nigeria is the finish.

Or, as Peter would put it, the last ten percent.  Now, I (to borrow from Said) am temperamentally and philosophically opposed to phrases such as “the problem with Nigeria”, but in this case I don’t think there’s much option.

The apartment, or “Guesthouse”, where we are all staying is a good example of this.  Designed by Debare himself, this actually represents one of the better finished flats you’re likely to see in Abuja.  But my room resembles a cheap hotel I once stayed in in Calcutta, there’s a huge broken fridge in the kitchen that no one shows any signs of moving, and there’s an entirely redundant corridor that breaks the flat in two for no apparent reason.  Thomas, the Dean of Law, arrived last week and reacted to his room with, “Primitive.”  Pregnant pause, “Very primitive”.  Ten minutes later he’d left for the Sheraton.  And the last place he taught was Iraq.

The flats that we’ve been shown round with a view to renting are even more of a case in point.  These are places that the landlords are asking £20-30,000 a year for, yet there are holes in the walls, the kitchens look like they’ve been put together by someone who’s seen a picture of one, but has no idea what it’s actually for, they’re filthy, and the bathrooms would be enough to traumatise a more sensitive soul.  A one bed flat I saw had a kitchen so small that if you installed a cooker you wouldn’t be able to open any of the cupboards.  And everywhere’s got swimming pools, but none of them work.  If you think of the scene in Con Air where Steve Buscemi menaces a young girl by an abandoned motel pool in the middle of the desert, you’ll get the idea.

Most of these places have been empty for years, or never occupied.  This in a town that has a chronic accommodation shortage.  The landlords don’t have to let them, because they don’t need the money – they’re as much vanity projects and status symbols as anything else.
Other good examples include the huge mall – 6 stories with a cinema on top – that is clearly designed to furnish the glitterati with a place to promenade.  Unfortunately, there’s no access road, and precious few actual shops.  Abuja itself has an amazing system of roads, but there are few traffic lights, or road markings, and all the police are interested in is extorting bribes.  If the same amount of effort went into maintaining things as went into washing cars then the whole place would be spotless.  The poor gatekeepers at the apartment seem to spend half their working days washing, wiping and waxing, but no one’s ever thought to do anything about maintaining the generator, which breaks down every other day, leaving us, in every sense, powerless.

Every state capital has its own “international stadium”, but half of them haven’t hosted any events for up to a decade.  A plush shopping centre-cum-office block called “Dunes” has a fountain in the middle of its atrium, but it’s never been cleaned so the glass round the outside is practically growing stalagmites.

The university itself, unfortunately, follows the same pattern.  Debare must have invested millions in this place, and the campus building itself is good.  Unfortunately, he designed it himself, and he doesn’t have any experience of universities except going to them as a student, and so we don’t have anywhere near enough classrooms of the right size.  We open in five weeks, and are desperately trying to recruit students, yet the campus grounds look like a building site, and apparently nothing out there’s changed in months.  The operation to pave the courtyard/car park is being done on a home-made basis, with an interlocking brick factory out the back, and a couple of piles of gravel in the front.  But the ground’s not being levelled first, and there’s no treatment for weeds, so the bit that has been done already looks like a jungle, and the first car that drives over it will tear it to bits.

All of this is known, yet precious little seems to happen.  We don’t have internet access, and have only got two dongles between the lot of us.  But there’s no sign of buying any more.  The one thing that incites genuine activity and immediate response is the occasional appearance of a herd of goats that come in through the gates and investigate the piles of dead vegetation.  This has led to various security men being bawled at, and watching the jack-booted men trying to chase away these gambolling creatures is hilarious.  The goats seem to be having a great time, and I think it might be part of the reason they keep coming back.  Personally, I’d quite like to keep them as mascots, and perhaps concentrate on finishing off the odd project inside.  It’s not like they’re going to chomp through the immaculate landscaping – we haven’t got any.

Of course, some of this is your usual ex-pat experience, your common-a-garden culture shock and Western snootiness towards “Third World” organisation.  But there’s a multitude of reasons why that’s not the case here.  Firstly, Nigeria is an incredibly wealthy country, the 6th largest producer of oil in the world, and with a huge amount of mineral resources that it hasn’t even started to explore or exploit.  That’s not even to mention the agricultural potential, which is criminally untapped, and leads to a huge amount of food being imported for no good reason.

Other African countries have overcome all these problems with far fewer advantages – like, for example, our neighbour Ghana, that, just to scrape the surface, has 24 hour power and a university system that puts Nigeria’s to shame.  $16bn has been invested in NEPA (the Nigerian Electricity and Power Authority, or Never Expect Power Again, as it’s known) in the last decade, and the generating capacity has not increased.  In fact, things have decayed, which suggests that a few Swiss bank accounts have become substantially better feathered over the same period.
Apparently, one reason for this is the vested interest on the part of the people who sell generators.  They, obviously, don’t want NEPA to improve, because if it does, then there won’t be one of their engines in every front yard.    And whilst these abuses go on, and public infrastructure falls apart, there’s a 42” plasma screen in every room, baby, and enough shiny new 4x4s to make Kensington feel inadequate.  People buy bottles of Remy Martin in a bar for £70 a time, whilst their stewards take home barely more than that a month.  Honestly, it’s enough to make you a Marxist…

But I categorically am not blaming the “Nigerian people” here, if such a stupid generalisation of 160 million souls was even possible, or saying this is all some inevitable consequence of the national character.  There seems to be a huge will to change things from the public, but it’s fighting against a crushing sense of the impossibility of change, and a clear and complete lack of political will from the top.  The system of elections itself is underpinned by some remarkable absurdities – such as the principle of “indigenes”.  Basically, you can only be elected to the House of Representatives, or the Senate, in a state where you are an indigene.  And this does not mean the state where you were born, or live.  It means the state where you father came from, and your father’s father, and your father’s father’s father and so on.  And no matter how many generations live and are born somewhere else, they will remain indigenes of that arbitrary distant ancestor.   Jay Jay Okocha, the famous Nigerian footballer, for example, is claimed as the favourite son of a town he’s never lived in in his life, because that’s where his father is from.  And many administrations won’t employ anyone who isn’t an indigene of their state, even if they’ve lived there their whole lives and are better qualified for the job than the guy who was born and grew up hundreds of miles away, doesn’t know his arse from his elbow, but is one of us.  Such is life.

But everyone always looks immaculate here, even, if not especially, the poorest.  It reminds me of train journeys in India, where I’d see a toilet that was splattered in shit up to waist height, like Mr Creosote had eaten one wafer thin mint too many in there, but from which all the Indians would return in the morning scrubbed up and shining like they’d just returned from a spa.  How is it done?  Necessity and being used to it are the only answers I can come up with.
I realise I’ve strayed somewhat from the topic of “finish”, but I’ll come back to that some other time.  For now, I’m off to start a workers’ collective.