The Overcoat is a Finnish Play, at the Pleasance Theatre in London, produced by the Scottish theatre company ACE. It was performed at Edinburgh Festival last year and is part of a project to bring Finnish productions to the UK. This story is a reinterpretation of Nikolai Gogol’s short story of the same name. 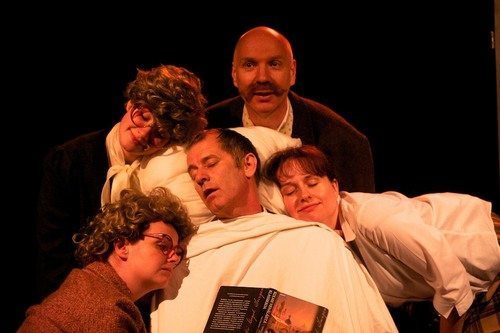 The Overcoat is a Finnish Play, at the Pleasance Theatre in London, produced by the Scottish theatre company ACE. It was performed at Edinburgh Festival last year and is part of a project to bring Finnish productions to the UK.  This story is a reinterpretation of Nikolai Gogol‘s short story of the same name.

Interpreted by Esa Leskienen and Sami Keski-Vhala, and adapted by Catherine Grosvenor, we have a thoroughly modern play reflecting on the individualism and greed of the recent banking crisis and current economic situation.

Akay McAkay is a bank clerk, ascetic and never changing, his story takes us through the banking climate of the 70s up to the present day. He is unaware of his influence over external situations and his only connection to anything appears to be in his appreciation of the natural world. The Overcoat is an exploration of big business and economic institutions.  Questions are raised about responsibility and where that lies within society.  Akay McAkay happily gets on with his existence without questioning authority, possibly alienated and existing as he is directed, he keeps up the ridiculous targets and unfulfilling regime, unaware of his inability to deal with the modern world, he is eventually diagnosed with depression and prescribed anti-depressants.

an exploration of big business and economic institutions

The play asks McAkay to be more aware of his role and the bigger picture.  As the gypsy lady tells him, ‘Any sorrow can be born as long as it is part of a story.’

The hilarious caricatures of the bank managers give us an indication of the fall from grace of commodity culture, as they change throughout each decade.  There is the cockney, who is out to make a fast buck, the Jock, who is dressed all in white, with a white stick and white hat, then the embellished, rich Russian business man. The play is stuffed full of caricatures and devices: the gurning faces, the changing wigs of the bank clerks, the rollerskating flash tech guy, the ‘brother’ typewriter hung around McAkay’s neck, the framed picture of the girl he loves, the framed picture of the Armani coat. The brilliant magnifying Big Brother style screens that represent The Big Society. The hole in his overcoat and how this says nothing of Akay McAkay’s internal world.

A defining part of the play is where the Russian manager, impressed by McAkay’s new Armani overcoat asks him to make a speech at a convention.  This is the most moving part of the play, as Billy Mack (who won best actor award at last year’s Edinburgh fringe) gives a touching performance. He is humbling, almost non-existent, but gentle and beautiful as he performs from the most natural and vulnerable part of himself.  He gets up to talk and speaks of the snowflakes, water dropping on leaves, glistening mildew, summertime, air, birds, sea, watching people go by in the park, he remains the same whilst culture around him changes.

The greed of the 70s and consumer culture grows through the decades, there is a gradual deterioration of workers’ rights and the problems that come with this. The bank employs more temps, trade unions disappear, targets and pressure on employees heightens, as buying power deteriorates and the market disappears.

This is the big society, split down the middle with people addicted to money and those left impoverished.

Eventually McAkay loses his job, gradually crushed by the people in power.  He has nothing, all his savings were spent on the new overcoat, he is lost and alone on the streets.  People look on him from behind huge magnifying screens for protection.  This is the big society, split down the middle with people addicted to money and those left impoverished. Throughout the play his life has no significance: he naively worked on behalf of corrupt officials and bosses, his only point of real life experience was with his connection to himself and nature, his innocent lack of corruption, and one girl, a temp to whom he once gave some hope. By the end we are asked to remember the forgotten ghosts, as they wander in the night, their lives lacking in meaning or progression.

This is a modern play, as decisions in finance have a devastating effect on ordinary people.   Akay McAkay is the beauty and the diamond and the gold dust in the fall.  His character is very moving, we take away a reminder of the beautiful things we experience.  The play refers back to the line, ‘Any Sorrow Can be Borne As Long as it is part of a Story.’  It reaches out to ask us to remember the full picture of who we are and where we stand within it, the production has done its job well. We leave the theatre with the questions surrounding us: who is responsible in society, individuals or the big business managers, or do we all have a part to play?

The Overcoat was performed at Pleasance Theatre, Islington, as part of the ‘From Start to Finnish’ series. Details